The UK has “formally confirmed” to the EU that it will not extend the Brexit transition period, as it unveiled its post-exit border plans.

The government has also confirmed that it has scrapped plans to immediately introduce full import controls on EU goods in the new year. 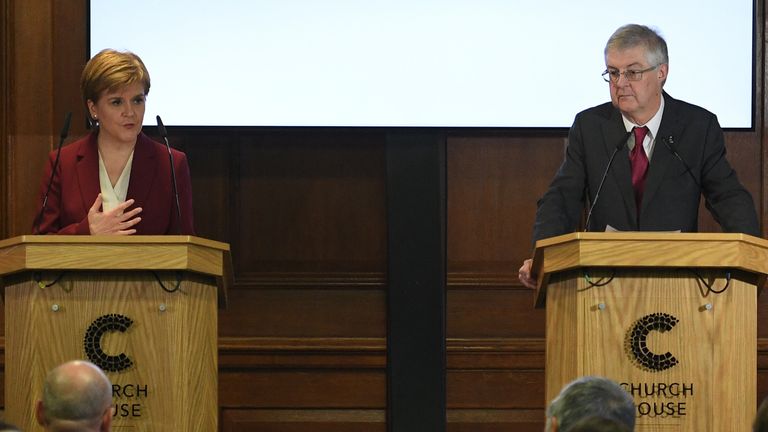 Mr Gove said Britain would now phase in changes so businesses hit by the coronavirus pandemic can have the “time to adjust”.

The developments come after the first ministers of Scotland and Wales wrote to Boris Johnson demanding an extension to the transition period past the end of December.

In their letter, Nicola Sturgeon and Mark Drakeford said ending the arrangement then would be “extraordinarily reckless” amid the effects of the coronavirus pandemic – and they believe it could lead to a “disastrous no deal outcome”.

Mr Gove posted on Twitter that he had chaired a “constructive” meeting of the EU Joint Committee with Maros Sefcovic, the EU Commission’s Vice-President for Interinstitutional Relations.

He said: “I formally confirmed the UK will not extend the transition period & the moment for extension has now passed. On January 1, 2021, we will take back control and regain our political & economic independence.”

Mr Sefcovic said: “From our side, I have taken note of the position of the UK on this issue and have stated, as President von der Leyen has already done, that the EU remains open to such an extension.

“In this context, we both, with Chancellor Gove, agreed on accelerating the implementation of the Withdrawal Agreement and to accelerate our work, and we also agreed that the Joint Committee should meet again in early September.

“By this date we also concluded that specialised committees including the one on the Ireland/Northern Ireland protocol will meet in the coming weeks.”

Reacting to the UK’s move, EU negotiator Michel Barnier said Brussels had “always been open to an extension”.

“At today’s joint committee, we took note of the UK’s decision not to extend. We must now make progress on substance,” he said.

“To give every chance to the negotiations, we agreed to intensify talks in the next weeks and months.”

The prime minister has repeatedly ruled out asking the EU for an extension since he entered Downing Street last summer.

Nevertheless, the first ministers argue the COVID-19 outbreak has changed things since Britain formally left the EU at the end of January after 47 years of membership.

During the transition period, Britain is maintaining the status quo of membership of the bloc and trying to negotiate a free trade agreement.

The pair said that without an extension, Britain would “at very best” be left with a “damaging ‘bare bones’ trade deal or even worse, a disastrous no deal outcome”.

“We believe that exiting the transition period at the end of the year would be extraordinarily reckless,” they said.

“It would pile a further very significant economic and social shock on top of the COVID-19 crisis, hitting businesses whose reserves, in many case, have already been exhausted, leading to more business closures and redundancies.”

Ms Sturgeon and Mr Drakeford said that because Britain can request an extension – and Brussels is open to one – “the shock would be avoidable”.

On border checks, the Cabinet Office said a “flexible and pragmatic approach” would now see them introduced in three stages.

Tariffs will need to be paid on all imports from January, with traders importing standard goods having to prepare for basic custom requirements. They will have up to six months to complete customs declarations.

Then, from April, meat, dairy and other animal and regulated plant products will need pre-notification and relevant health documentation.