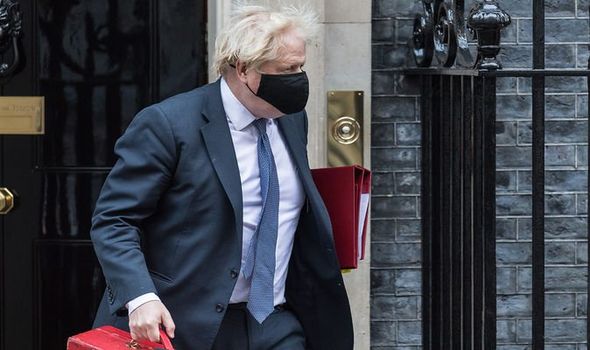 Britain and the EU are locked in bitter negotiations over changing the agreement which has caused major disruptions to trade.

The government is threatening to trigger Article 16 of the protocol – which would suspend parts of the arrangement – if Brussels fails to take significant steps to resolve the dispute.

And the Prime Minister today signalled he is prepared to take action soon.

During Prime Minister’s Questions (PMQs) Mr Johnson was challenged on when the UK would be invoking Article 16.

DUP MP Ian Paisley Jr said: “It has cost businesses in Northern Ireland £850million to date to operate the field and suffocating protocol.

“When will the Prime Minister fix this by legitimately activating Article 16?”

Mr Johnson, who has previously referred to Article 16 as the nuclear option, replied: “There is no doubt the use of Article 16, which has been done by the EU Commission to stop Covid vaccines being exported to this country, is something that is perfectly legal within the bounds of the Protocol.”

His remarks came ahead of a showdown between Brexit minister Lord Frost and European Commission vice president Maros Sefcovic in Brussels on Friday.

Ahead of the meeting Lord Frost warned the EU that triggering Article 16 remains a “very real option”.

The UK’s lead Brexit negotiator said he would like to see a deal agreed with the European Union, but if that is not possible Article 16 is a “legitimate option”.

Speaking during a visit to Northern Ireland Lord Frost said he would “very much hope” to bring the talks with the EU to a conclusion.

“That’s what we would most like to do. If we can’t, if there can’t be an agreement, then obviously the famous Article 16 is a very real option for us,” he told BBC Radio Ulster.

Asked about Irish Foreign Affairs minister Simon Coveney’s assessment that there will be a deal before Christmas, Lord Frost said: “I would like to progress this as fast as we possibly can, I’m glad there’s ambition on the EU side. I think it can be done.

“Whether it will be done is a different question, it’s got to be a deal that deals with the problems, solves the underlying problems and makes a difference to businesses and people’s lives.”

Lord Frost said there is a “gap” between the UK and EU positions.

“We are in a situation where the EU has made some proposals, at the moment without going into detail, I’m not sure they would solve these problems of checks and processes for goods moving into Northern Ireland, but we keep talking and we’re seeing if we can move this forward in a way that does produce consensus,” he said.

“I think it’s everyone’s preference, it’s certainly our preference to try to resolve it without using Article 16, but if we can’t resolve it in the negotiations, Article 16 is a perfectly legitimate option to solve these problems. That’s why it has to be on the table.

“It’s obviously a matter for the European Union if they were to choose to retaliate against any use of Article 16, which I repeat is perfectly legitimate.