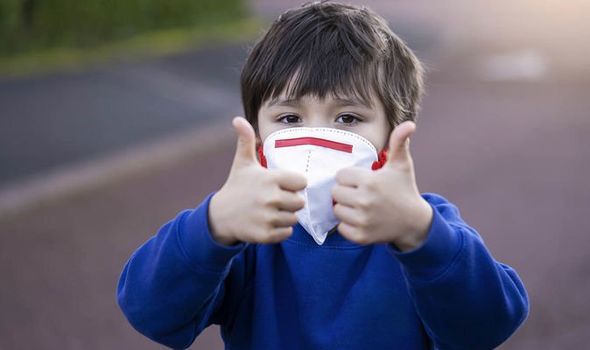 He said youngsters in COVID “hotspots” should wear masks in school corridors but not in classrooms. And encouraging children back to school next month, he said: “The greatest risk you face now is of continuing to be out of school.” Mr Johnson spoke out following criticism of the Government’s sudden decision on Tuesday to make face coverings compulsory in secondary schools in areas under local lockdown after previously rejecting their use in schools. 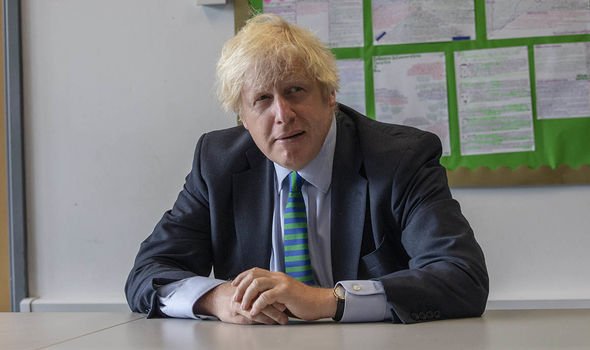 Explaining the decision yesterday, the Prime Minister said: “On the issue of face coverings, what you’ve got is the World Health Organisation saying face coverings should be used by over-12s.

“What we’re saying is if you’re in a school where there is a ‘hot spot’ then it probably does make sense in confined areas outside the classroom to use face coverings in the corridor and elsewhere.”

He admitted that the Government had decided to follow Nicola Sturgeon’s administration in Scotland in recommending face coverings in schools in some circumstances.

“As they discovered in Scotland, where they’ve had the kids in for at least a couple of weeks now, what they found was that it was raining outside, people were coming in and they were congregating in the corridors and the move to face coverings they thought was sensible. 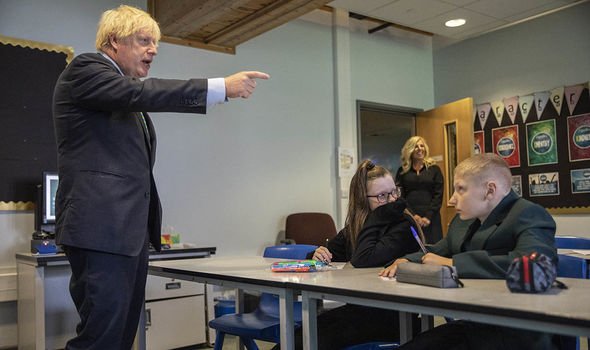 “What we are doing, following what the WHO has said, is we are saying if you are in a hot spot area where there is a higher risk of transmission then face coverings in those types of areas outside the classroom.

During his visit to Castle Rock school in Coalville, Leicestershire, the Prime Minister blamed a “mutant algorithm” for the exam grading fiasco.

Speaking to a group of youngsters from a lectern in the school’s library, he said: “I’m afraid your grades were almost derailed by a mutant algorithm. 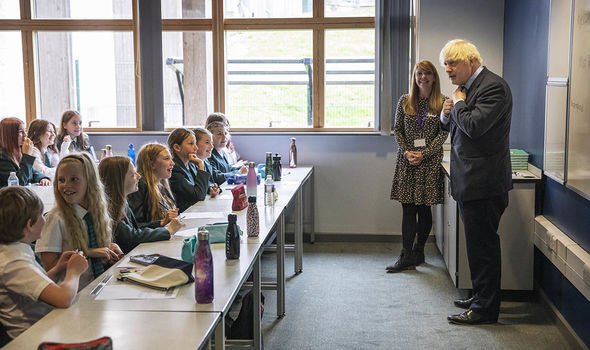 “I know how stressful that must have been for pupils up and down the country.

“I’m very, very glad that it has finally been sorted out.”

He also sought to encourage enthusiasm for the reopening of schools by promising pupils they will “experience things with an intensity and clarity that is seldom repeated in your lives”.

In a jokey address, the Prime Minister told the pupils they would be covering subjects such as nuclear fusion, whether Harry Potter was “sexist” and: “is it politically acceptable to sing Rule Britannia – yes”. 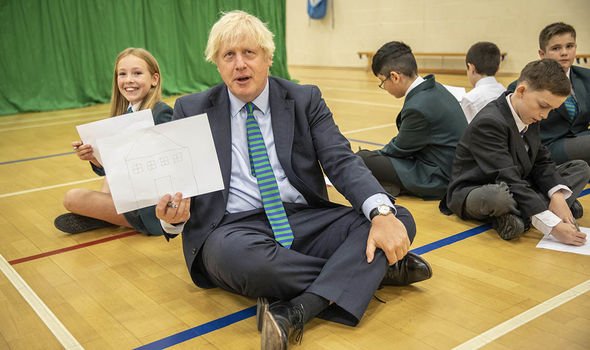 Mr Johnson said: “When you are struggling with complex questions or something which you are worried about, somebody – very probably a teacher, a brilliant teacher – will say something and a light will go on, the clouds will lift and you will never, ever forget that moment.”

He thanked the youngsters for their endurance during the lockdown and school closures.

“No previous generation of pupils has ever done anything like this.” 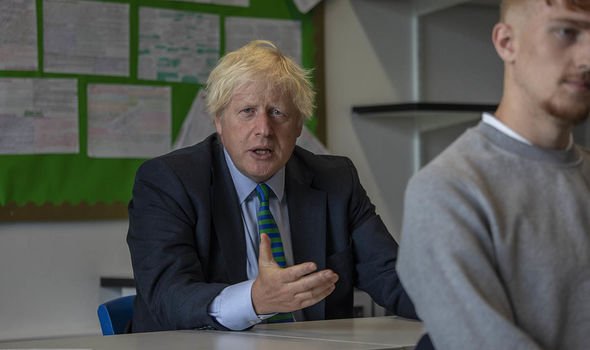 Earlier, Education Secretary Gavin Williamson said the school policy on face coverings was announced after consideration of advice from the World Health Organisation.

He said: “We’ve constantly said that this is something that stays under review at all stages.

“Now we’ve reached the decision and this was very much, yes, looking at the World Health Organisation but also most importantly in constant discussion with Public Health England. 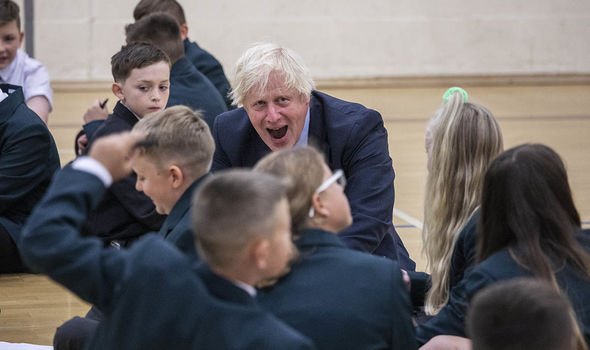 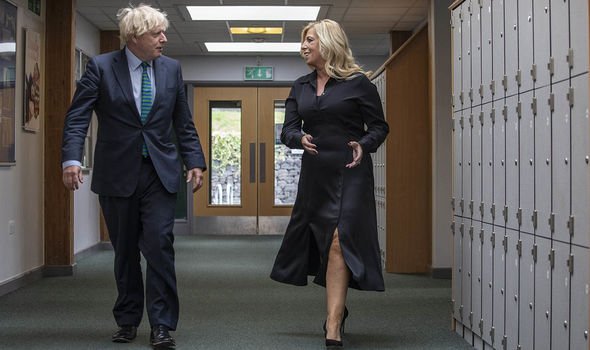 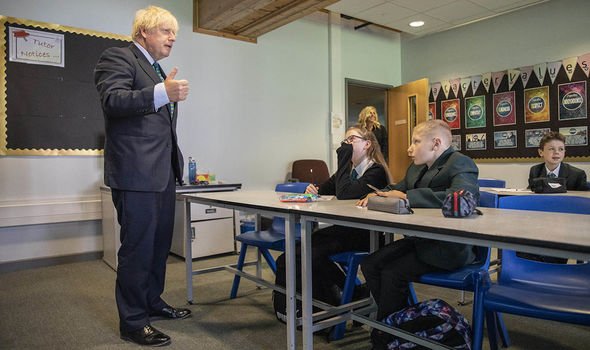 Some Tory MPs criticised the U-turn over face coverings in schools yesterday.

Backbencher Huw Merriman said: “I don’t think it’s the right decision because I think we need to send the message out that our schools are safe with the measures that they’ve been taking and will be taking.

“I just absolutely fundamentally feel that young people just need to be able to get on with their education free of any encumbrance.

“Anything that sends a message out that it’s not safe in the corridor means that it can’t be safe in the classroom and we’re on a slippery slope.

“My concern is that we just keep making this up as we go along.”

He added: “I think we need the firm smack of government behind this. We need to send a message out that schools are a safe setting.

“We know that the risks are so low you’re sadly more likely to see your child lose their life through getting to school than actually the COVID pandemic.

“And really we need to send a message out that school is a place where children can be themselves, can learn, can thrive and really take their opportunities and not be scared.

To find out about coronavirus in your area, please fill in your postcode below.

“The worry is that if we’re saying it’s unsafe in the corridors, the next thing it’ll be unsafe in the classroom and that will really prove an impediment on people’s learning.

“And, quite frankly, as a Conservative MP that came into politics to try to help people’s life chances through school, I am sick and tired of the way that we are treating our young people.

“I feel it’s an absolute disgrace and I really feel the Government needs to get a grip and just be certain, get on with it and inspire confidence rather than just completely changing its mind. 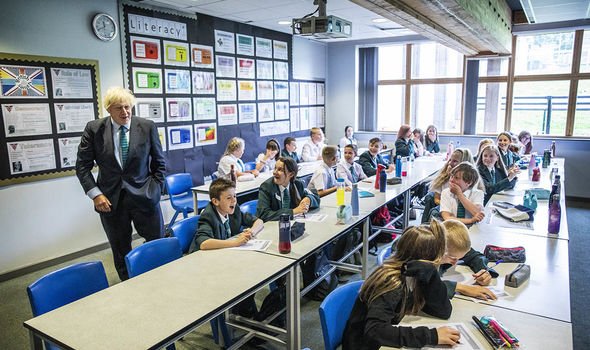 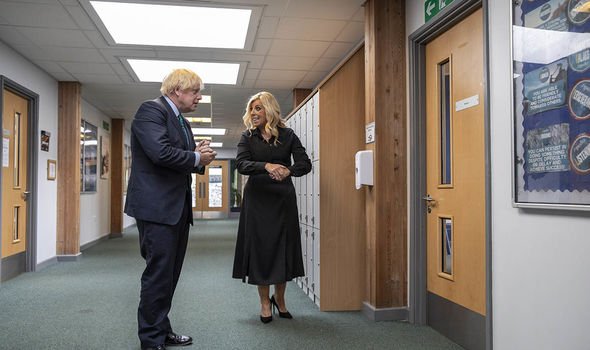 He said: “I think the chief medical officer, just as he did last Sunday about the risk of school return or low risks, should put out a letter about the mask policy.

“What exactly it is and why it is and the science behind it, but in a way that ordinary folk can understand it.”

Pupils over the age of 11 in Wales will be recommended to wear face coverings in school communal areas where social distancing cannot be maintained, the Welsh Government announced yesterday.