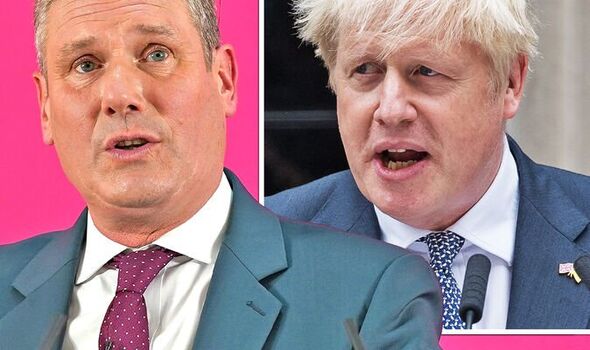 The Opposition party are set to table a motion for a vote to take place tomorrow.

Sir Keir vowed to take action if the Conservative party did not force Mr Johnson to stand down as Prime Minister yesterday.

Labour said it was untenable for the incumbent of No10 to remain in his position while the Tories held a leadership contest.

Sir Keir said last Friday: “If they don’t get rid of him then Labour will step up and bring a vote of no confidence.

“They cannot inflict him on the country for the next few months.”

A number of Tory MPs were also uneasy about Mr Johnson remaining as Prime Minister and has publicly called on him to step aside and a caretaker appointed.

Last night the Conservative party’s 1922 committee, which determines the rules of leadership elections, considered whether to require the incumbent to quit while the contest took place.

However, they ultimately decided to let him continue serving as Prime Minister until September 5 when a new leader for the party will be appointed.

Sir Keir is understood to have concluded to plough ahead with tabling the confidence motion last night once it became clear the Tories would not prematurely oust Mr Johnson.

The no-confidence motion means MPs from all the parties represented in parliament can vote on whether the Government should continue in office.

If the Government loses the vote, it could trigger a general election.

It is unlikely Tory MPs will back Labour in the vote.

However, a Labour source said: “It will put the squeeze on backbench Tories to either vote for him, and be hypocrites, or back Labour, admitting we were right.

“Do all those Tory leadership candidates really want to be answering that question next week? They know he needs to go.”