SNP Westminster leader Ian Blackford called on the Government to implement immediate cost of living measures suggesting Tories should not be “hiding behind the contest” excuse. In light of the remarks, Sky News host Anna Jones slammed Mr Blackford as she questioned whether it would be “a waste of time” to put in new cost of living policies that “are only going to be revered” by the new Tory leader in “just over a week time”. Following the remarks, Mr Blackford shut down the comments from the host and said SNP should be the ones sitting in the Parliament. 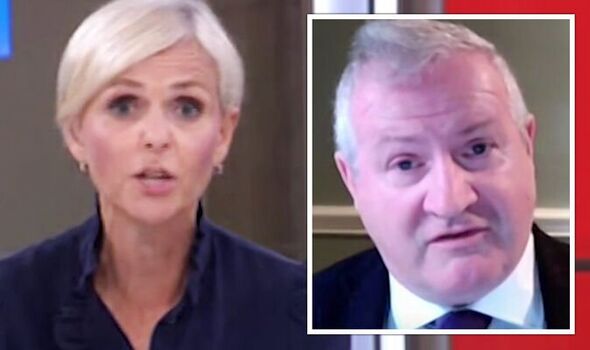 Ms Jones told Mr Blackford: “The Government should say it is equally important to have a proper process of scrutinising the next Prime Minister and choosing properly who that leader should be and if they were to put policy in now it is only going to be reversed by that person that walks through the doors of Number 10 in just over a week time that would be a waste of time.

“Don’t you have sympathy with that argument?”

“The Government needs to act and we should be in Parliament.

“I am grateful we are having these discussions with you this morning but Parliament should be sitting to discuss what is the national emergency.”

Following the remarks, Mr Blackford slammed the comments from the Sky News presenter and said: “No, not at all because it is not a presidential-style government.

“We have this collective responsibility in the Cabinet.

“We should be sitting, we shouldn’t be discussing this.

“Our constituents are angry and yesterday people were fearful.”

He added: “Government is on vacation and there is no excuse knowing the importance of the announcement made yesterday.

“We should be sitting in Parliament and we should have made sure that the selection contest was way earlier.

“We knew this was going to be a difficult summer, we’re going to be back for two-three weeks and goodness knows what’s going to happen because the focus is going to be on the cabinet.

“And then of course we go into a conference recess for another week, we should be back in Parliament, doing our job, protecting citizens and making sure that people are not facing the anxious choices that they are going to [make] over the course of the next few weeks.”