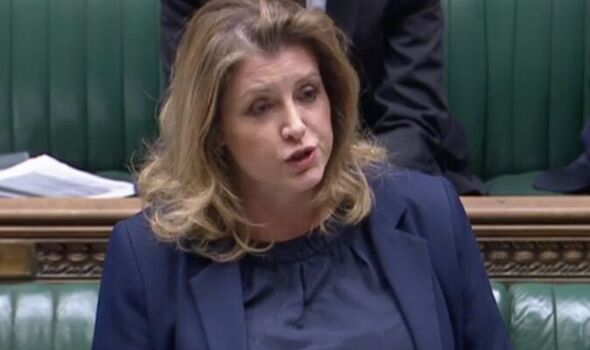 During international trade questions in the House of Commons Ms Mordaunt revealed that 27 partnerships with Commonwealth countries will be worth $2 trillion by the end of the decade in 2030.

It came as Tory Cornwall Souuth East MPs Sheryll Murray urged the Government to use the Platinum Jubilee celebrations to build on relationships with former parts of the British empire.

Ms Mordaunt told MPs: “Pre pandemic, the combined GDP of the Commonwealth was 9 trillion US dollars and nearly 80 percent of that was due to four nations.

Us, India and Canada with which we are now negotiating a free trade deal (FTA), and Australia where we have already secured a from scratch FTA.

“With 27 economic partnerships we intend to boost our intra Commonwealth trade to 2 trillion US dollars by 2030.”

In further exchanges, Ms Murray asked: “In this year of the Platinum Jubilee what better time could there be to cement our bonds with Commonwealth countries.

“Does my Right Honourable friend agree with me that this would be an extra year to redouble our efforts with these nations which have such a strong history with our own?”

Ms Mordaunt repled: “Yes we have the Jubilee we also have the Commonwealth Games [in Birmingham] and obviously Chogm [in Rwanda] approaching and it is right that we celebrate and enhance our Commonwealth family.

“I think we should be putting all our weight behind maximising that.”