The variant can dodge some of the immune system’s defenses, but is still vulnerable to vaccines. 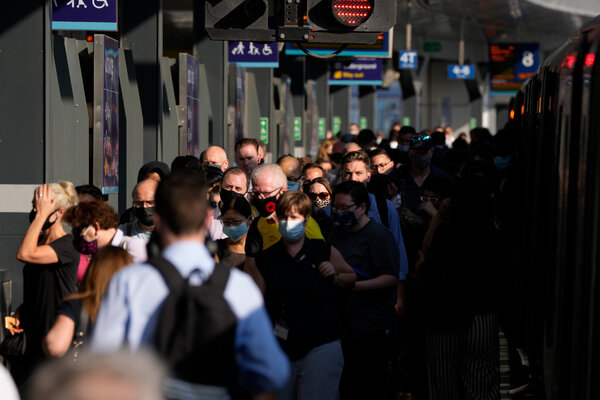 England lifted nearly all of its pandemic restrictions on Monday, which some Britons have hailed as “freedom day.” The British government, however, made a notable exception: People traveling to England from France must continue to quarantine upon their arrival, even if they are fully vaccinated.

The rule, announced on Friday, was spurred by concerns about the presence of the Beta variant of the coronavirus in France and is intended as a precautionary measure, officials said.

“While vaccines are helping us turn the tables against this virus, we need to continue to proceed cautiously,” Dr. Jenny Harries, the chief executive of the U.K. Health Security Agency, said in a statement on Friday. “That means maintaining our defenses against new variants and protecting our hard-won progress through the exceptional vaccination rollout.”

Here are answers to some common questions about the Beta variant.

What is the Beta variant?

The Beta variant, formerly known as B.1.351, was first detected in South Africa last year. It contains several mutations, in a protein called spike, that help the virus bind more tightly to human cells.

It also contains the E484K mutation, sometimes known as the “Eek” mutation, which appears to help the virus partially evade antibodies. This mutation has emerged independently in multiple variants, including Gamma, which surfaced in Brazil, and in some samples of Alpha, which was first identified in Britain.

The World Health Organization and the Centers for Disease Control and Prevention have both designated Beta as a “variant of concern.”

Why are people worried about it?

Scientists and health officials became concerned about Beta because it spread quickly through South Africa and research indicated that some vaccines were less powerful against it.

Beta's ability to bind tightly to human cells may also make it more transmissible; the C.D.C. notes that it appears to be roughly 50 percent more infectious than the original strain of the virus. It does not appear to be as contagious as Delta, however.

Where is it common?

Beta has now been reported in 123 countries, but it remains far less prevalent than Delta.

Initially, Beta spread widely through South Africa, where it once made up more than 95 percent of virus samples sequenced in the country.

It is no longer so dominant. In the last four weeks, Beta has accounted for just 5.6 percent of virus samples sequenced in South Africa, according to GISAID, a repository of viral genomes. (This decline is most likely because of the arrival of the highly contagious Delta variant, which now accounts for 77.6 percent of sequences.)

Over the last four weeks, the variant has also represented 3.7 percent of virus samples sequenced in France, according to GISAID. It is especially common on Réunion, a French island in the Indian Ocean where Beta accounts for 31.2 percent of sequences.

Beta is not common in the United States, where it represents just 0.1 percent of infections, according to C.D.C. estimates. It has been detected in Britain, but accounts for a negligible share of infections there.

Do the vaccines work against Beta?

The vaccines seem to be less powerful against Beta than against other versions of the virus. But studies suggest that two doses of several widely used vaccines should still offer strong protection.

Studies in Qatar, where the Beta variant once accounted for half of all infections, have found that two doses of the Pfizer vaccine are 72 to 75 percent effective at preventing infection with Beta, a lower degree of protection than the shots provide against other variants. But both the Pfizer and Moderna vaccines provided strong protection against the worst outcomes; a full course of either vaccine was more than 95 percent effective at preventing severe disease and death.

In an additional bit of good news, he added, there is also “no sign” that the protection these vaccines provide against Beta has waned in the first several months after the shots.

In a clinical trial in South Africa, conducted when Beta was dominant, the Johnson & Johnson vaccine had an efficacy rate of 64 percent overall, but 82 percent efficacy at preventing severe disease.