With some health care workers still refusing to be immunized, medical centers around the country are requiring shots as cases climb once again. 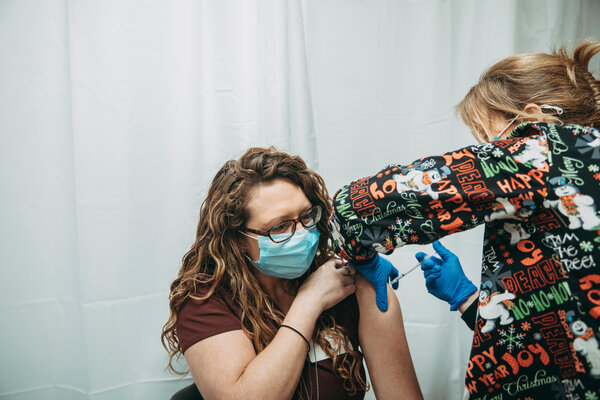 More and more hospitals and major health systems are requiring employees to get the Covid-19 vaccine, citing rising caseloads fueled by the Delta variant and stubbornly low vaccination rates in their communities and even within their work force.

Many hospitals say their efforts to immunize their employees have stalled, in much the same way the nation’s overall vaccination rates are stuck under 60 percent, behind many European countries and Canada. While more than 96 percent of doctors say they are fully vaccinated, according to the American Medical Association, health care workers, particularly in rural areas, have proven more resistant even though thousands of workers have died from the virus and countless more became sick.

One recent estimate indicated that one in four hospital workers were not vaccinated by the end of May, with some facilities reporting that fewer than half of their employees had gotten the shots.

Some hospitals, ranging from academic medical centers like NewYork-Presbyterian and Yale New Haven to large chains like Trinity Health, are going ahead with a mandate because they recognize that the only way to stop the virus is to vaccinate as many people as possible, as quickly as possible. A large Arizona-based chain, Banner Health, announced Tuesday that it would impose a mandate, and New York City said it would require all health care workers at city-run hospitals or clinics to be vaccinated or undergo weekly testing.

Watching cases rise prompted Trinity Health, a Catholic system with hospitals in 22 states, to become one of the first major groups to decide earlier this month that it would mandate inoculations. “We were convinced that the vaccine can save lives,” said Dr. Daniel Roth, Trinity’s chief clinical officer. “These are preventable deaths.”

At UF Health Jacksonville, in Florida, the number of Covid patients being treated has surged to levels not seen since January, and only half of its health care workers are vaccinated, said Chad Neilsen, the director of infection prevention. Seventy-five employees are out sick with the virus, the vast majority of whom are unvaccinated, while more are waiting for test results. “We are absolutely struggling for staffing right now,” he said.

“It’s like déjà vu,” said Mr. Neilsen, who described growing frustration with colleagues refusing to get the shots. “We have a reason to believe this could be over if people got vaccinated.”

Some employees want more data, while others say the process has been too rushed. Many of the same conspiracy theories and misinformation — that the vaccines will make women infertile or contain microchips — hold sway among staff members. “Our health care workers are a reflection of the general population,” he said.

Hospital leaders and others plan to meet with state officials in the coming weeks about the possibility of imposing a mandate, he said.