Residents and workers at long-term-care facilities are high-priority candidates for the Covid-19 vaccine. But many are still waiting.

Ruth Ann Platt of Gainesville, Ga., received her second dose of the Moderna Covid-19 vaccine after spending seven months in her room. Now, she said, “I would love to find someone who plays a good game of pinochle.”Credit…Nicole Craine for The New York Times

Ruth Ann Platt, watching the news on television about effective vaccines for the coronavirus, couldn’t wait for them to reach her nursing home in Gainesville, Ga. “I thought it was a great thing from the get-go,” she said.

When Ms. Platt, 88, moved into New Horizons Lanier Park last year after surgery for a fractured femur, the facility had already instituted harsh restrictions to contain Covid-19 outbreaks. “I’ve lived in this room for seven months,” she said.

She has yet to share a meal with another resident, attend a concert or take an art class. The hair salon has remained closed, she said, so “pretty soon I’ll be Rapunzel.” She is tiring of video chats as a substitute for visits with her children, grandchildren and eight great-grandchildren.

Happily, she received her second dose of the Moderna vaccine last month. New Horizons, part of the nonprofit Northeast Georgia Health System, opted out of a federal partnership that relies on CVS and Walgreens to serve long-term-care facilities. Using its own pharmacy and nurses, it began vaccinating residents quickly, starting Dec. 29.

Now, Ms. Platt said, “I would love to find someone who plays a good game of pinochle.”

The report card for vaccination in long-term-care facilities, whose residents supposedly stood at the front of the line, shows a mixed performance.

Nationally, almost 3.4 million long-term-care residents and staff members have received at least one shot, the Centers for Disease Control and Prevention reported on Thursday; close to 800,000 had gotten two. 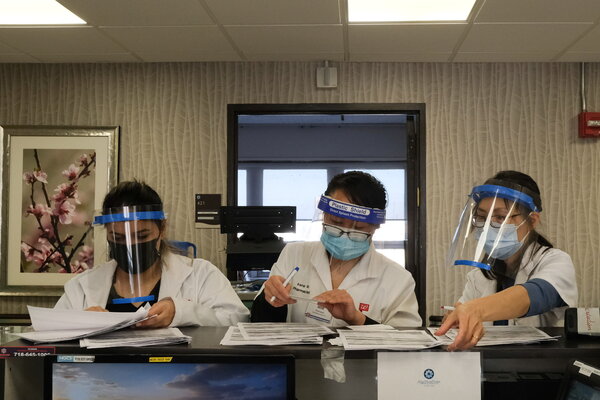 By mid-January, Medicare data showed that cases in long-term-care facilities had dropped by almost 46 percent compared with four weeks earlier, reflecting the decline in cases across the country but probably also the impact of vaccination.

But experts and advocates, noting that an estimated five million people live or work in long-term care, have expressed intense frustration at the slow initial rollout. “There’s been nothing warp speed about long-term care,” said David Grabowski, a health policy researcher at Harvard Medical School.

They also worry about the even more sluggish rate at assisted-living facilities and about workers who are suspicious of vaccination.

Last fall, the Trump administration contracted with the two big pharmacy chains, which agreed to hold three clinics at each facility: first dose, second dose and one to catch any stragglers missed earlier.

The pace of vaccination has picked up substantially. Walgreens increased the number of doses it was administering, from 165,000 in December to 1.3 million last month. It has completed the first doses at all 5,529 of the nursing homes it contracted with and expects to deliver the second doses by Feb. 25 and to complete third visits by mid- to late March.

Similarly, CVS, which has the larger program, has delivered first doses to all of the 7,822 nursing homes it is serving and about 77 percent of the second doses.

Company executives emphasized that while the Centers for Disease Control and Prevention prioritized long-term care for vaccination, individual states determined when programs began.

“We were actually planning for a national rollout on the same date,” said Chris Cox, senior vice president for pharmacy business at CVS. “We were ready to go.” But while nearly all states activated nursing home clinics on Dec. 21 or 28, most didn’t launch assisted living clinics until January, often weeks later.

The virus didn’t wait. Infections in long-term care reached a peak in December, according to a Kaiser Family Foundation analysis; so did deaths, in many states. Although long-term-care residents and staff members account for just 5 percent of the nation’s Covid-19 cases, they represent 37 percent of the deaths.

With a swifter response, “we could have had more nursing home residents vaccinated more effectively four to six weeks earlier,” said Dr. Michael Wasserman, a geriatrician and past president of the California Association of Long Term Care Medicine. “That’s a lot of deaths that could have been prevented.”

Future business students may scrutinize this plan for years. “This was never going to be easy, with 30,000-plus facilities and millions of residents and staff,” Dr. Grabowski said. “States and the federal government were happy to push this over to the private sector.”

Early on, facility administrators grappled with cumbersome consent forms, a problem that has since been resolved. CVS and Walgreens executives also report having to contact some facilities multiple times simply to schedule clinics.

Administrators, for their part, questioned the three-visit plan. How would these clinics reach staff members who worked night and weekend shifts? Or newly admitted residents, those returning from hospitals and those who were discharged after only one dose? The C.D.C. is reportedly working on a transition plan.

Moreover, although the chains post updated numbers daily, “we don’t have the level of information we’d like, even now,” said Tricia Neuman, executive director of the Program on Medicare Policy at Kaiser Family Foundation. The aggregate numbers don’t show which facilities the companies visited or the proportions of residents and staff members they vaccinated.

Residents have responded enthusiastically. The C.D.C. has estimated that during the program’s first month, in nursing homes with clinics, a median 77.8 percent of residents received their first doses.

“People who live in nursing homes would do just about anything to reconnect with the outside world and the people they love,” said Dr. Kathleen Unroe, a geriatrician at the Indiana University School of Medicine who also practices at Northwest Manor, a nursing home in Indianapolis.

One of her patients initially had doubts. “I didn’t want to be a guinea pig,” said Norma Ware, 86. “I’m not crazy about shots, anyway.” But after conversations with her family and “a very friendly nurse,” she received both doses and became a believer.

The bigger problem: a reluctant staff. The C.D.C. reported that at nursing homes with clinics, only a median 37.5 percent of staff members were vaccinated in the first month.

Other health care workers have also shown hesitance. But in nursing homes, particularly, many workers are women of color, familiar with longstanding inequities in health care and mistrustful of the medical establishment.

What You Need to Know About the Vaccine Rollout