A contagious variant of the coronavirus spreading through Britain has left that nation grappling with new lockdowns, curtailed air travel and a surge in infections. Now the same variant has appeared in Colorado and California, threatening to complicate what had seemed a hopeful, if halting, path to recovery from the pandemic in the United States.

Scientists do not know how widely the new mutant may have spread in the United States. But the answer to that question will color virtually every aspect of the nation’s pandemic response: hospital treatment, community lockdowns, school closures and more.

“The overall picture is pretty grim,” said Bill Hanage, an epidemiologist at the Harvard T.H. Chan School of Public Health.

The arrival of the variant also makes it all the more imperative that Americans receive vaccinations in great numbers, and more quickly, scientists said. A pathogen that spreads easily is more difficult to contain, and a greater percentage of the population must be inoculated to turn back the pandemic.

Yet even as the variant surfaced in the United States, officials with the Trump administration acknowledged on Wednesday that the vaccine rollout was going too slowly. Just 2.1 million people had received their first dose as of Monday morning, far short of the 20 million goal.

“We agree that that number is lower than what we hoped for,” said Moncef Slaoui, scientific adviser to Operation Warp Speed, the federal effort to accelerate vaccine development and distribution.

The federal government has enrolled 40,000 pharmacy locations in that program designed to accelerate vaccine distribution, Mr. Slaoui and other officials said.

The new variant, called B.1.1.7, is not thought to be more deadly than previous variants, nor does it seem to cause more severe illness. Masks, physical distancing and hand hygiene are still the best ways to contain its spread. Current vaccines are likely to be effective against the variant and any others that may emerge in the short term.

But given the mutant’s apparent contagiousness, scientists fear that its toehold in the United States augurs another difficult chapter in the pandemic. Gov. Gavin Newsom of California announced on Wednesday that a case of the new variant had been discovered in the state.

Officials in San Diego County later identified the patient as a 30-year-man who had not traveled outside the United States, suggesting the virus was transmitted by someone else in the community — a sign that the variant is already spreading. A household contact of the man has developed symptoms, the officials said, and is being tested for the variant.

Officials in Colorado confirmed one patient and identified a second suspected case, both men in the National Guard assigned to a nursing home in Simla, Colo., about 80 miles southeast of Denver. The confirmed patient also had not traveled.

“There’s no reason to think that that community is particularly special in any way,” Dr. Hanage said. “It’s completely reasonable to think it’s in a lot of other places, but we just haven’t looked for it yet.”

Officials at the Centers for Disease Control and Prevention said on Wednesday that they were working with state laboratories in California, Delaware and Maryland to analyze patient samples for infection with the new variant. Agency scientists also plan to analyze up to 3,500 viral genomes each week to detect the new mutant and other variants as they emerge.

The virus’s debut in the United States underscores the need for urgent steps to tamp down transmission, experts said. If the variant is spreading in this country, it will bring not just an increase in the number of cases, but also of hospitalizations and deaths. 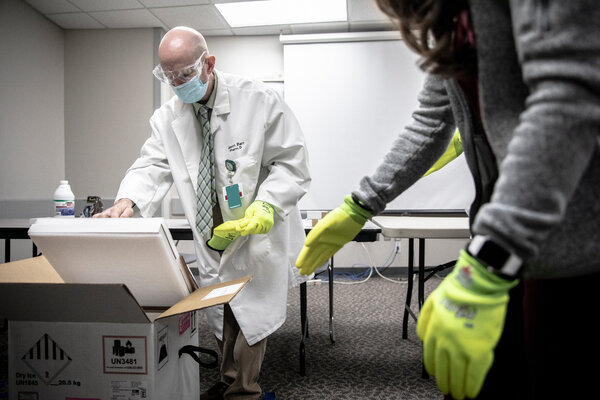 That’s because a variant that infects more people will reach more who are vulnerable or frail, leading to more illness and fatalities even if the virus itself is not more deadly.

The number of people hospitalized for Covid-19 daily has been rising relentlessly since October, totaling nearly 125,000 on Wednesday. Those numbers are expected to swell as a result of family gatherings over the holidays.

“In places like the U.S. and the U.K., where the health care system is already at its breaking point, a huge surge of new cases on top of the exponential spread we’re already seeing is going to be really, really bad,” said Angela Rasmussen, a virologist affiliated with Georgetown University in Washington.

“We’re still learning how these variants might respond to drugs and other Covid-19 treatments, including monoclonal antibodies and convalescent plasma,” Dr. Henry Walke, the C.D.C.’s incident manager for Covid response, said at the news briefing.

The arrival of the variant also ramps up the urgency to get Americans vaccinated because it raises the threshold for so-called herd immunity — the percentage of people who must be inoculated to contain the threat. That threshold may be 90 percent now, versus the 70 percent experts previously estimated.

At least two million Americans must be vaccinated each week to prevent the health care system from buckling even under the current surge, experts estimate, let alone an increase brought on by the new variant.

The mutant virus seems to spread in the same ways that the coronavirus always has, suggesting that well-known precautions — shutting down nonessential businesses and instituting mask mandates and physical distancing — will hold the virus at bay.

“It’s not like this variant suddenly has new capabilities, or that it can suddenly cross over large distances outdoors,” Dr. Rasmussen said.

But the ease with which the new variant spreads implies that even more stringent restrictions may be needed, scientists said. “This variant was not stopped by the stronger interventions that were put in place in the U.K. in November,” Dr. Hanage said. “And that means that we need more.”

That is likely to prove difficult at a time when many Americans are already defying restrictions.

On Wednesday, about a quarter of the shoppers going into the Simla Food Store in Colorado left their faces uncovered, only half a block from the nursing home where the mutant virus is believed to have surfaced.

“They chew us out because they don’t think all this is real,” said Cené Kurtchi, 71, who runs a cafe in town and requires patrons to wear masks. “I think part of it is politics, part of it is denial. People don’t want to admit even a little place like Simla is at risk.”

British authorities first detected the mutant virus in September. They reported earlier this month that the variant quickly became the predominant type, accounting for more than 60 percent of new cases in London and surrounding areas.

“I would expect a similar trajectory” in the United States, said Trevor Bedford, an evolutionary biologist at the Fred Hutchinson Cancer Research Center in Seattle. The variant probably accounts for fewer than 1 percent of cases now, he estimated, but might constitute the majority of cases by March.

The variant has 23 mutations, compared with the original virus discovered in Wuhan, China. Seventeen mutations appeared since the virus diverged from its most recent ancestor, said Muge Cevik, an infectious disease expert at the University of St. Andrews in Scotland and a scientific adviser to the British government.

The speed with which the virus acquired so many alterations worries scientists, who had expected the coronavirus to evolve far more slowly.

Current vaccine candidates should continue to protect people from illness, several experts said. But the appearance of the new variant, which contains at least one mutation that weakens the body’s immune protection, makes it likely that vaccines may need regular adjustment, much as they do to remain effective against the influenza virus.

Scientists are still unsure how much more easily the mutant spreads. Initial estimates were around 70 percent greater transmissibility, but the figure has since been revised to 56 percent and may dip even lower, Dr. Cevik said.

But with every new person it infects, the coronavirus also has more chances to mutate, and therefore more chances to happen upon mutations that give it an advantage — by making it more transmissible, for example, or less susceptible to the immune system.

“If you have enough of that going on, huge amounts of virus replication throughout the world, then you are going to get many different variants,” said Dr. Dan Barouch, a virologist at Beth Israel Deaconess Medical Center in Boston.

“If a virus essentially is better adapted to the human host, then it will quite rapidly overtake the global population.”

Dr. Cevik offered one nugget of optimism. Early reports from Britain hinted that the new variant spreads more readily among young children. But those suggestions were based on trends in older teenagers, who respond to the virus much as adults do, and can be explained by clusters in high schools, Dr. Cevik said.

“It was really early speculation and caused a lot of distress,” she said. “There is no evidence to suggest this new variant was more common in certain age groups.”

Related posts:
Latest Posts
AmEx sees consumer travel recovery after lower spending hits profit
S&P 500 scales new high on upbeat corporate earnings
Recent Commercial Real Estate Transactions
Regeneron's antibody cocktail effective in preventing COVID-19 infection: study
Mike Lindell, MyPillow C.E.O. and a Trump conspiracy advocate, is barred from Twitter.
Recent Posts
This website uses cookies to improve your user experience and to provide you with advertisements that are relevant to your interests. By continuing to browse the site you are agreeing to our use of cookies.Ok