When President-elect Joseph R. Biden Jr. takes office in January, he will inherit a pandemic that has convulsed the country. His transition team last week announced a 13-member team of scientists and doctors who will advise on control of the coronavirus.

One of them is Dr. Céline Gounder, an infectious disease specialist at Bellevue Hospital Center and assistant professor at the New York University Grossman School of Medicine. In a wide-ranging conversation with The New York Times, she discussed plans to prioritize racial inequities, to keep schools open as long as possible, and to restore the Centers for Disease Control and Prevention as the premiere public health agency in the world.

The incoming administration is contemplating state mask mandates, free testing for everyone and invocation of the Defense Production Act to ramp up supplies of protective gear for health workers. Indeed, that will be “one of the first executive orders” of the Biden administration, she said.

Below are edited excerpts from our conversation.

Tell us about Mr. Biden’s Covid advisers. Who is doing what?

The coronavirus task force is the team the vice president leads within the current administration. I’m a part of the Biden-Harris advisory board. Then there’s the internal transition team, which is much bigger. The transition team has been developing a Covid blueprint, the nuts and bolts of the operations, and this is something they’ve been working on for months.

The purpose of the advisory board is really to have a group of people who think big, creatively and in interdisciplinary ways — to be a second set of eyes on the blueprint they’ve come up with, and also to function as a liaison with state and local health departments.

How often will you meet with Mr. Biden and the Vice President-elect Kamala Harris? 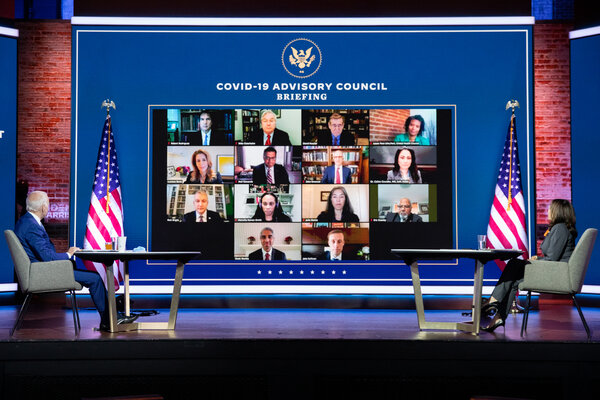 We’re going to have, at a minimum, a weekly meeting as a group. But in addition to that, we may be asked to brief members of the transition team and the president-elect and vice president-elect. I’ve already been on two of those briefings.

They’re asking very insightful questions, very thoughtful questions, which demonstrate that they are sensitive to who has really been hit hard, who has suffered. In terms of awareness of the technologies, they understand more than I ever thought a politician would understand. Like asking what would be the appropriate timing and target populations for monoclonal antibodies. For somebody who doesn’t follow these things, that is a really good question.

What’s the plan to help communities that have been hit hardest?

Race disparities are definitely going to be a through line for all the plans — for example, with respect to testing, making sure that you are locating testing facilities in communities of color. They have not been adequately served, and the lines to wait to get tested, the turnaround times, have not been equitable.

Another area that is really of interest is Indigenous people. They are often misclassified in terms of their race and ethnicity, and that makes it very difficult to do analyses to figure out what are the trends in those communities and to target interventions accordingly. Being really attentive to detailed data surveillance, and using that to inform how we address these disparities, is going to be very, very central.

What’s the thinking on school reopenings?

If you have widespread community transmission, there may come a tipping point where you do need to go back to virtual schooling. But I think the priority is to try to keep schools open as much as possible, and to provide the resources for that to happen.

From an epidemiologic perspective, we know that the highest-risk settings are restaurants, bars, gyms, nail salons and also indoor gatherings — social gatherings and private settings.

I would consider school an essential service. Those other things are not essential services. The smarter we are about being very responsive to trends in transmission — to closing indoor restaurants sooner — the longer you’re likely to be able to keep schools open.

We know that the risk of transmission in schools is not zero, but they’re not amplifying transmission the way some of these other places are.

We need to be supporting those businesses, whether it’s the restaurant owners and the people working in those restaurants, because it is not fair that they are bearing a very heavy brunt of the economic fallout from this.

Mr. Biden has said he would invoke the Defense Production Act to get companies to manufacture protective gear.

From the beginning we have been — and I’ve seen it firsthand — in a rationing mode. And now things are getting worse again, so that is a very high priority. I think that’s going to be one of the very first executive actions that Mr. Biden would be taking.

What role do you see the C.D.C. playing in this pandemic and in the future?

The approach is going to be much more along the lines of giving control back to the C.D.C. There’s recognition that the C.D.C. is the premiere public health agency in the world. And while their role has been diminished during this current crisis, they play a very important role in all this.

The latest on how the pandemic is reshaping education.