Two journalists responsible for some of The New York Times’s most high-profile work of the last three years have left the paper after their past behavior was criticized inside and outside the organization.

In two memos on Friday afternoon, Dean Baquet, the paper’s executive editor, and Joe Kahn, the managing editor, informed the staff of the departures of Donald G. McNeil Jr., a science correspondent who reported on the coronavirus pandemic, and Andy Mills, an audio journalist who helped create “The Daily” and was a producer and co-host of “Caliphate,” a 2018 podcast that was found to have serious flaws after an internal investigation.

Mr. McNeil, a veteran of The Times who has reported from 60 countries, was an expert guide on a Times-sponsored student trip to Peru in 2019. At least six students or their parents complained about comments he had made, The Daily Beast reported last week. The Times confirmed he used a “racist slur” on the trip.

In their memo, Mr. Baquet and Mr. Kahn wrote that Mr. McNeil “has done much good reporting over four decades” but added “that this is the right next step.”

The statement was a turnabout from last week, when Mr. Baquet sent a note to the staff saying he would give Mr. McNeil “another chance.”

“I authorized an investigation and concluded his remarks were offensive and that he showed extremely poor judgment,” Mr. Baquet wrote, “but that it did not appear to me that his intentions were hateful or malicious.”

Days after that note, a group of Times staff members sent a letter to the publisher, A.G. Sulzberger, that was critical of the paper’s stance on Mr. McNeil. “Despite The Times’s seeming commitment to diversity and inclusion,” said the letter, which was viewed by a Times reporter, “we have given a prominent platform — a critical beat covering a pandemic disproportionately affecting people of color — to someone who chose to use language that is offensive and unacceptable by any newsroom’s standards.”

Mr. Sulzberger, Mr. Baquet and Meredith Kopit Levien, the chief executive of The New York Times Company, replied to the group in a letter on Wednesday, saying: “We welcome this input. We appreciate the spirit in which it was offered and we largely agree with the message.”

In a statement to Times staff on Friday, Mr. McNeil wrote that he had used the slur in a discussion with a student about the suspension of a classmate who had used the term.

“I should not have done that,” he wrote. “Originally, I thought the context in which I used this ugly word could be defended. I now realize that it cannot. It is deeply offensive and hurtful.”

Mr. McNeil concluded, “For offending my colleagues — and for anything I’ve done to hurt The Times, which is an institution I love and whose mission I believe in and try to serve — I am sorry. I let you all down.”

The departure of Mr. Mills, the audio journalist, was announced nearly two months after The Times published an editors’ note on the mistakes in “Caliphate.” The note said the series, about the Islamic State, had put too much credence in the false or exaggerated account of one of its main subjects.

In an interview with Michael Barbaro, the host of the Times podcast “The Daily,” Mr. Baquet attributed the show’s flaws to “an institutional failing.” The editors’ note and interview followed a monthslong internal investigation into the “Caliphate” reporting. 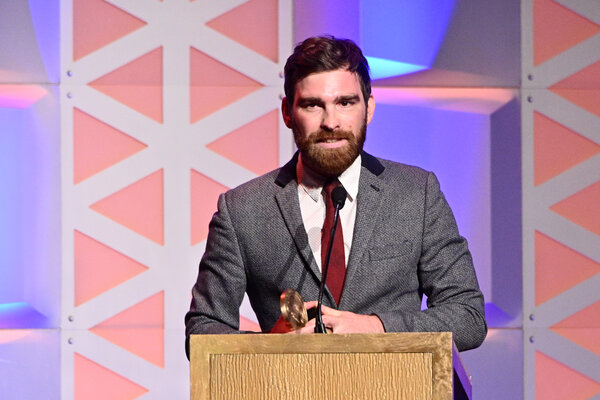 After the correction, people who worked with Mr. Mills in his previous job, at the WNYC show “Radiolab,” posted complaints on Twitter about his behavior toward women in the “Radiolab” workplace and in social settings.

In February 2018, two months before “Caliphate” made its debut, an article in New York Magazine’s The Cut on sexual harassment in New York public radio reported that Mr. Mills had been the subject of complaints during his time at “Radiolab.”

Women interviewed for the article said that he had asked them for dates, given unsolicited back rubs and poured beer on the head of a woman he worked with, and that a woman in the office had been hired over a man because of her gender. WNYC’s human resources department investigated Mr. Mills’s behavior, The Cut reported, and gave him a warning while allowing him to keep his job. In an interview for The Cut, Mr. Mills admitted to much of the behavior described in WNYC’s human resources report.

In an online post on Friday, Mr. Mills said that his departure from The Times did not stem from the problems with “Caliphate,” and that leaders at the paper “did not blame us” for its flaws.

After the publication of the editors’ note, “another story emerged online: that my lack of punishment came down to entitlement and male privilege,” he wrote. “That accusation gave some the opportunity to resurface my past personal conduct.”

He wrote that he had told The Times about his past mistakes when he was hired and had received good reviews for his work at the paper. He also said he received a promotion in December. But in the weeks after the mistakes of “Caliphate” were made public, he wrote, the “allegations on Twitter quickly escalated to the point where my actual shortcomings and past mistakes were replaced with gross exaggerations and baseless claims.”

In the end, “I feel it is in the best interest of both myself and my team that I leave the company at this time,” he wrote. “I do this with no joy and a heavy heart.”