When the pandemic shut down motorsports, sim racing filled the gap. Can it hold on to fans and sponsors when sports get back to normal?

It takes more than gasoline to make a racecar run.

It requires money. And money requires sponsors. And sponsors require spectators who they hope will become customers. Which became a problem for motorsports when Covid-19 shut down tracks worldwide early last year. The cash drought put teams, tracks and race series in danger of extinction.

The industry turned to an emerging phenomenon — simulated racing. In these highly realistic video games, cars obey the laws of physics and race on reproductions of real-life tracks that are accurate down to the last pavement seam.

In an experiment, NBC and Fox replaced the canceled races with sim races. No one knew if digital cars would draw viewers and pay off for sponsors. Traditionally, racecars served as high-speed billboards leading consumers to clamor for the engine oil proved superior by the winning car. Could a sim car sell engine oil, having neither an engine nor oil?

Ten months into the experiment, sim races seem to be paying off, as television and web audiences helped to salvage the 2020 season. And now sim racing gives teams a new source of revenue, gives sponsors a more accountable form of marketing and has interested a young audience that motorsports have struggled to capture. Soon sim racing will face the real test: Can it retain fans and sponsors when real cars are back on real tracks and real spectators are in the stands?

Racing video games aren’t new. You could play Indy 500 and Street Racer on Atari in 1977. By the ’90s, more sophisticated Formula One games — albeit with blocky graphics — flourished. Graphic refinement vaulted ahead in successive generations of game consoles from Xbox, PlayStation and Nintendo. Now, at a casual glance, you might not even notice the races are simulated.

Desktop computers also run highly complex networked games, like iRacing, which was the chosen platform of a number of race organizations, including NASCAR, IMSA, IndyCar and the W Series. Formula One chose its own commercial game by Codemasters.

Many pro racers privately used the games to train. At a minimum, the tracks’ fidelity lets drivers memorize the layout. Some teams use special simulator software to fine-tune the setup of their actual cars before a race. 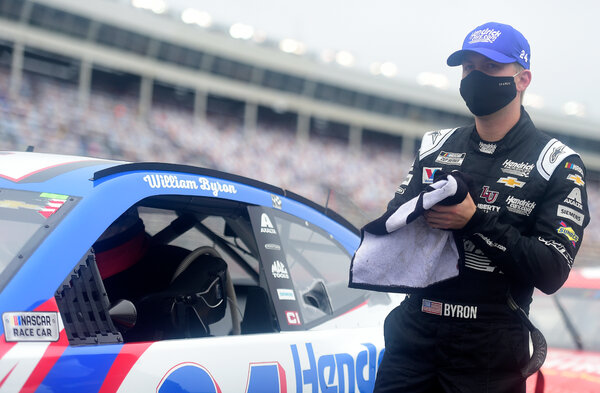 Pro drivers have sneaked unannounced into online competitions for years. For fans, it’s like joining a pickup basketball game and finding LeBron James on the court.