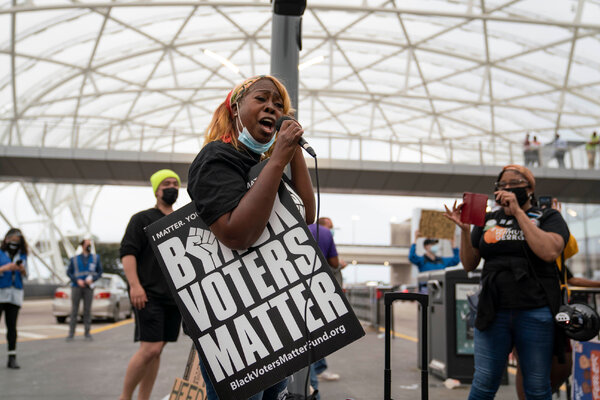 Now, a threat of boycotts

Companies were quick to speak out during the racial justice protests last year, putting out statements of solidarity and posting black squares on Instagram. But after Georgia Republicans passed broad voting restrictions, Atlanta’s corporate giants have been much more muted — and activists are now talking boycotts, The Times’s David Gelles writes.

Delta, which has publicly defended gay rights and said it stood with Black people after the police killings of George Floyd and others. But on the voting legislation, the airline has only issued a statement about a need for broader voter participation. It told employees that it had “engaged extensively” with lawmakers in creating the legislation, and that the measure had “improved considerably” during the process, though it noted that “concerns remain.”

Coca-Cola, which pledged last summer to “invest our resources to advance social justice causes.” When it came to the recent bill, Coke said that it was aligned with local chambers of commerce, which also spoke mainly of increasing voter participation and avoided sharp criticism. (Late yesterday, Coke said it was “disappointed” in the new law, but added, “We don’t see this as the final chapter.”)

“It’s not as though corporations are unwilling to speak powerfully about social justice issues,” Sherrilyn Ifill, the president of the NAACP Legal Defense, told David. Companies spoke out forcefully against bills on gender and bathroom access, even threatening to pull out of states like Indiana and, yes, Georgia.

What changed? Companies may be shying away from political fights, after spending four years speaking out against the Trump administration. And the Georgia laws were spearheaded by mainstream Republicans, making executives less eager to cross lawmakers they may need on other issues.

Ms. Ifill raised a provocative third potential reason. “Why is it that corporations that could speak so powerfully and unequivocally in opposition to discrimination against the L.G.B.T.Q. community and immigrants are not speaking as clearly about the disenfranchisement of Black people?” she said. “This is a race issue.”

For activists, the next step is calling for boycotts on companies with big Georgia presences, including Coke, Delta, Home Depot and UPS. If “Coca-Cola wants Black and brown people to drink their product, then they must speak up when our rights, our lives and our very democracy as we know it is under attack,” Bishop Reginald Jackson of the African Methodist Episcopal Church told The Atlanta Journal-Constitution.

The Suez Canal is clear. Now what? The 224,000-ton Ever Given was freed from the vital shipping passage days after being stuck, hindering global trade. After the celebrations will come two big questions: What happened, and how can the disruptions be sorted out?

The Pfizer and Moderna vaccines show effectiveness in the real world. A new study found that a two-dose regimen prevented 90 percent of Covid-19 infections by two weeks after the second shot. But President Biden and the head of the C.D.C., Dr. Rochelle Walensky, urged Americans to maintain virus safety measures in the face of “impending doom” from a potential fourth wave of cases.

The White House pushes for tax increases to pay for its infrastructure and jobs plan. As it rolls out its multitrillion-dollar spending initiative, the Biden administration is likely to call for about $3 trillion in new taxes, The Washington Post reports.

President Tayyip Reccip Erdogan of Turkey fired another top central bank official. The removal of Murat Cetinkaya, a deputy governor, was announced with no explanation. It came 10 days after Mr. Erdogan fired the bank’s chief, setting off a sell-off in Turkey’s currency.

The Supreme Court wonders what to do in an investor fraud lawsuit against Goldman Sachs. Justices noted that both sides agree that general statements about professional integrity could be the basis for a lawsuit, and that their positions had moved closer over the course of litigation.

The bank mutiny that led to the Archegos fire sale

As Wall Street reckoned with the fallout from the huge stock sales tied to Archegos Capital Management, one thing has become clear: Cooperation is not the finance industry’s strong suit.

Archegos’ main lenders met on Thursday to discuss an orderly wind-down of the firm’s trades, according to The Wall Street Journal. The idea was to limit the damage from several banks dumping huge blocks of stock in ViacomCBS and other companies, potentially tanking prices and hurting their own balance sheets.

You can guess what happened next. Credit Suisse and Morgan Stanley sold small amounts of stock after that meeting. But Goldman Sachs opened the floodgates the next day, quickly followed by Morgan Stanley. By market close, the two had sold nearly $20 billion worth of Archegos assets.

That left Goldman and Morgan Stanley with relatively little damage to their businesses, while banks that didn’t move as quickly — notably Credit Suisse and Nomura — warned investors that they could suffer huge hits. As one banker involved told the FT, “The reality is in a fire sale, if you’re not first out the door you’re going to get burned.”

What a SPAC believer thinks of SPAC mania

Kevin Hartz, the founder of Eventbrite, believes in the value of SPACs: In February, his first SPAC (named “One”) acquired the industrial 3-D printing company Markforged in a $2.1 billion deal. His second blank-check fund — named “Two,” of course — raised $200 million yesterday. Still, he told DealBook that he believes some SPACs pose risks to retail investors.

Below are edited excerpts from their conversation.

On why S.E.C. scrutiny is needed:

Because people are getting hurt. “For some millennial family to invest in a SPAC, or invest in a SPAC merger, and then see that crater is why we need the S.E.C. to be more involved here,” he said.

What could happen next:

Mr. Hartz pointed to the dot-com bubble as a warning: “We still kind of point to 1999, 2000 as an indicator of what SPACs will need to go through, unfortunately, and that is kind of extreme euphoria, followed by the reality of most losing money for investors.”

On whom to blame if the SPAC boom busts:

Some banks. “There’s a lot of low-quality banks that are just looking for the fees,” he said. Perhaps more troubling, he added, are weaker companies looking for SPAC deals. There is “a set of companies floating around that are not good companies that are looking to get SPACed and get their money out,” Mr. Hartz said.

On who gets hurt when SPACs go wrong:

Retail investors: “In a natural market, low-quality companies should naturally run out of cash,” Mr. Hartz said. “In this case, they get a big balance sheet there in the public market, have a liquid currency and can front-run retail investors.”

On how to fix SPACs:

“Lower the promote,” Mr. Hartz said, referring to the free stake that SPAC sponsors get, a setup that allows heady returns even if a target company’s stock plunges. Critics say that structure draws sponsors looking for a quick buck.

Make sponsors hold their stakes for longer. “Then you’re not just leaving investors holding the bag,” he said. “You’re going to be part of that, too.”

Urge more caution around financial projections. SPACs help younger businesses get access to otherwise limited public capital, he noted. But some companies are putting out unrealistic numbers: “That’s where it gets dangerous, because these companies will, say, project $2 billion of revenue in 2026 — and may not even ever produce one dollar of revenue.”

A case against transparency?

Demand for more visibility into corporations and governments has grown in recent years. Yet when it comes to the Supreme Court, some are resisting efforts to allow more sunlight into the institution, as demonstrated in the debate over a bipartisan bill that aims to televise the court’s proceedings.

No Supreme Court hearing has ever been filmed, though Congress has been trying to get cameras in federal courts since 1937. Most state courts allow cameras, and some federal circuit courts permit video with limits. But Chief Justice John Roberts and the five other veterans on the bench have said they fear that the presence of cameras would transform oral arguments into showy performances. (The court’s three most recent appointees have said they would consider it.)

Seeing arguments in “monumental cases” shouldn’t be a privilege of the few, said Senator Dick Durbin, the Democratic chairman of the Judiciary Committee, who is sponsoring the Sunshine in the Courtroom Act. Adding cameras “opens our democracy and gives millions of Americans a window into the room where decisions are made that have lasting effects for generations,” he told DealBook.

Then again, the court has adapted during the pandemic, allowing live audio feeds of arguments. Justices may clamp down on the public’s access to the court when the pandemic lifts, but the tech precedent may make that more difficult.

On the first day of the Biden presidency, Jen Psaki, the White House press secretary, said that the Treasury Department was “taking steps to resume efforts” to put the abolitionist Harriet Tubman on the $20 bill. (“It’s important that our money reflects the history and diversity of our country,” Ms. Psaki said.) But it will probably be years before we see the Underground Railroad conductor gracing U.S. currency.

The deadline for printing a new version of the $20 bill: 2030. It was set by an anti-counterfeiting committee in 2013, two years before Tubman won a campaign to replace President Andrew Jackson on the bill. “The primary reason currency is redesigned is for security against counterfeiting,” Lydia Washington, a representative for the Bureau of Engraving and Printing, told DealBook. “The redesign timeline is driven by security feature development.”

The Obama administration said it would unveil a design “concept” by 2020, to coincide with the centennial of the 19th Amendment, which gave women the right to vote. Extensive redesign work was reportedly done, but in 2019 President Trump’s Treasury secretary, Steven Mnuchin, said the project would be delayed until at least 2026. (Insiders said they had always doubted that the 2020 deadline could be met).

It turns out that the complex design and testing process for currency can’t be hurried. “No final images have been selected,” Ms. Washington said. (The Treasury Department did not respond to a request for comment).

The food service Deliveroo lowered the high end of valuation expectations for its forthcoming I.P.O., to £7.85 billion ($10.8 billion). (Reuters)

A British government watchdog is reportedly poised to investigate ties between former Prime Minister David Cameron and the founder of the failed lender Greensill Capital. (FT)

Newly created Twitter accounts purporting to be Amazon employees emerged last month to defend the company amid a unionization drive at one of its Alabama warehouses. (Insider)

Best of the rest

Goldman Sachs said its interns would work out of its offices this summer. (Bloomberg)

If the minimum wage had grown at the same rate as Wall Street bonuses since 1985, workers would be paid $44 an hour today. (Insider)

Take a peek at the potential offices of the future: hot desks, Zoom rooms and more. (NYT)

We’d like your feedback! Please email thoughts and suggestions to [email protected]