Sharon Osbourne, a television host who faced criticism for defending contentious remarks by the British journalist Piers Morgan about Meghan, the Duchess of Sussex, has decided to leave “The Talk,” the U.S. daytime talk show where she worked for more than a decade, CBS said on Friday.

Ms. Osbourne is married to the musician Ozzy Osbourne and began her television career in “The Osbournes,” the Emmy Award-winning reality show about their family. She faced criticism this month for publicly defending Mr. Morgan after he questioned an account that Meghan gave to Oprah Winfrey about life in Britain’s royal family.

In the interview, Meghan told Ms. Winfrey that members of the royal household had discouraged her from seeking treatment after she confided in them that she had thoughts of suicide.

Mr. Morgan later said on “Good Morning Britain,” a show that he co-hosted, that he did not believe Meghan’s account. When a colleague chided him for “trashing” Meghan, he stormed off the set and left the show the next day.

That week, Ms. Osbourne, 68, said on Twitter that she stood by Mr. Morgan, a former tabloid editor and CNN host who is a friend of hers.

“People forget that you’re paid for your opinion and that you’re just speaking your truth,” she wrote.

During a subsequent episode of “The Talk” that aired on March 10, the co-host Sheryl Underwood asked Ms. Osbourne about her defense of Mr. Morgan.

“What would you say to people who say that, while you’re standing by your friend, it appears that you give validation or safe haven to something that he has uttered that is racist, even if you don’t agree?” Ms. Underwood asked.

Ms. Osbourne said she felt as if she were “about to be put in the electric chair because I have a friend who many people think is a racist.”

Ms. Osbourne later posted a statement on Twitter in which she apologized to “anyone of color that I offended and/or to anyone that feels confused or let down by what I said.” She said she had “panicked, felt blindsided, got defensive & allowed my fear & horror of being accused of being racist” to take over.

“Please hear me when I say I do not condone racism, misogyny or bullying,” she added. “I should have been more specific about that in my tweet” about Mr. Morgan. 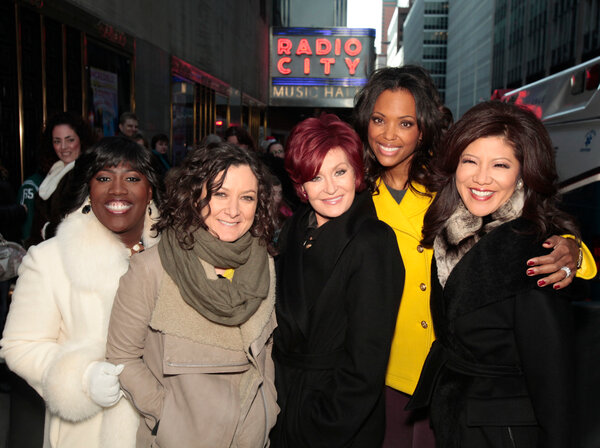 On Friday, CBS said in a statement that “Sharon Osbourne has decided to leave ‘The Talk.’” It added that her “behavior toward her co-hosts during the March 10 episode did not align with our values for a respectful workplace.”

A spokesman for Ms. Osbourne, Howard Bragman, said in an email that he had no comment on her departure from the show.

“The Talk” has been on a hiatus since mid-March. CBS said on Friday that the show would resume airing original episodes on April 12. It also said it had found no evidence that executives at the network had “orchestrated the discussion or blindsided any of the hosts.”

But the network said it was accountable for what happened during the March 10 broadcast because Ms. Osbourne and her co-hosts “were not properly prepared by the staff for a complex and sensitive discussion involving race.”