Alison Hop, the vice president of commerce for the office apparel start-up Ministry of Supply, woke up on the morning of March 13, 2020, ready to help host a store reopening party that night in Washington’s Georgetown neighborhood.

Three hundred mini cupcakes from Georgetown Cupcake had been ordered for the occasion, which marked the end of a pricey remodel. A store expansion was part of the aggressive growth plan approved just days before by the board of the Boston-based company, which started selling comfortable office clothing in 2012.

Within hours, however, all of that had been upended. The growing seriousness of the pandemic forced Ms. Hop and a colleague to cancel the party and scramble to find a way back to Boston.

And the cupcakes: Well, they became breakfast, lunch and dinner for the two.

“It was kind of symbolic and really a sad moment,” Ms. Hop said.

Ministry of Supply is one of millions of small businesses that were blindsided by the pandemic, though it was hit especially hard as a company that sold work clothing at a time when almost everyone stopped going to the office. What it has faced in the past year mirrors the existential questions that retailers nationwide have been dealing with: How do you plan during a pandemic for a business that typically orders products six months in advance? What do you do when your merchandise becomes virtually irrelevant overnight and your stores become ghost towns? And how long can you survive in these conditions?

“We’ve been close to tears more times than I can count over the past 11 months,” said Aman Advani, Ministry of Supply’s chief executive and a co-founder. “There’s a class of people killing it right now that makes Pelotons, but there’s a lot of people in our shoes.”

Ministry of Supply was founded by a group of graduates from the Massachusetts Institute of Technology who wanted to make work clothing as comfortable and low maintenance as workout gear, seeking to bring technological innovation to $125 dress shirts and $495 blazers. It has made clothes with NASA-engineered materials and sells a machine-washable suit that Gihan Amarasiriwardena, the brand’s president and another co-founder, wore to run a half-marathon. (The gimmick set a Guinness World Record.)

While the brand is niche, it built a steady following largely among men in white-collar professions, reaching $14 million in sales in 2019 after two years of 40 percent growth, according to figures it provided to The New York Times. It was also opening stores, a popular strategy among direct-to-consumer brands like Warby Parker and Away. The Georgetown location was its sixth store. Stitch Fix, the clothing subscription company, also distributed its products.

Ministry of Supply’s leaders believed that 2020 would be a breakout year, especially after the brand posted record sales on a Monday that February, typically its worst-performing day in its slowest month. Its board agreed it was time to “put the pedal down” after years of careful growth, said Luke Reese, its chairman and the founder of Winona Capital, a private-equity firm. On March 3 of last year, in what would prove to be a brutally ill-timed decision, the board approved an aggressive plan to accelerate spending on dress shirts, suits and dresses, as well as stores, anticipating that the brand’s sales would skyrocket by about 60 percent to $22 million in 2020.

Within weeks, the world changed, though the extent of the shift would not become clear for months. Mr. Advani recalled a sign posted in the brand’s stores in mid-March that said it would reopen on April 1. “It turned out that April of 2021 would have been ambitious,” he said.

At the time, the company was not alone in believing that it simply needed to ride out a monthslong storm before normalcy returned. It put retail store staff to work on remote projects like sending gifts and handwritten notes to its best customers, and tapped the Paycheck Protection Program to pay those employees and its landlords. It also started producing masks, which would ultimately account for 13 percent of sales last year and give the company much-needed cash flow.

By the end of the summer, the end was nowhere in sight and the company’s revenue was stagnant. “Every time I would call an investor, they’d say, ‘Please tell me Ministry didn’t go out of business,’” Mr. Reese said. He had faith in the executives but, he said, “if you weren’t concerned, you weren’t paying attention.”

By August, the start-up decided to “stop betting on the comeback happening,” as Mr. Amarasiriwardena put it, and overhauled the business around new ideas: the notion that remote or hybrid work would continue for years, and office dress codes would permanently loosen. The company put a focus on “sharp” clothing that could be worn in many different situations. It would continue to promote its science-backed approach to clothing and unique fabrics.

A mad scramble ensued. Fabric that was slated for blazers was repurposed to joggers. The company edited items that were already in production, inserting elastic waistbands where there were once stitched waists and tapering hems on suit pants to give them “sneaker cuts,” while pausing orders of suits, blazers and dress shirts. The modified suit pants took a scant 30 to 45 days to turn around, compared to the company’s typical product timeline of four to six months.

Ministry of Supply rephotographed all 200 items on its website and rewrote the descriptions, with an eye to “get rid of every pair of high heels, every brown dress shoe, every tightly tucked-in shirt, every mention of office or work-friendly,” Mr. Advani said. It renamed about 25 percent of its wares to make them more appealing to remote workers — dropping the “dress” from its “Apollo Dress Shirt,” for example.

It found a production company in New York that specialized in “Covid-friendly photo shoots,” and it styled its products to look more casual, often pairing them with sneakers, Ms. Hop said. 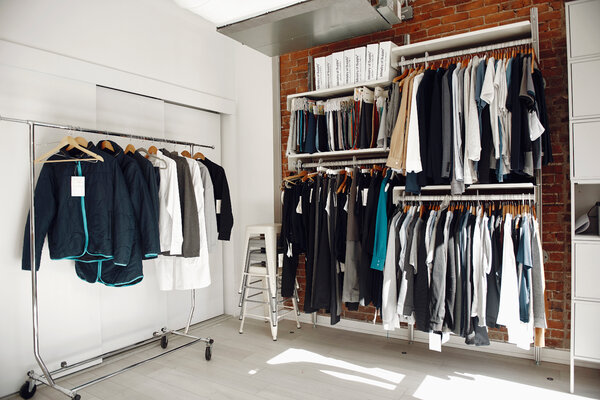 The revamped site launched on Oct. 13, just ahead of the holiday shopping season.

Ministry of Supply is a tiny cog in the big business of apparel retail. The switch to remote work for many people has led to higher sales of casual clothing like leggings and new items like “coatigans,” but its implications stretch well beyond the office.

The steep drop in apparel sales during the pandemic has devastated mall chains, including department stores like Macy’s, and precipitated a slew of bankruptcies. It has prompted store closures and led to job losses from corporate offices to factories. The fallout will reshape the retail landscape for years to come.

Ministry of Supply’s bet on “work leisure” clothing reflects recent industry predictions for “hybrid clothing lines” that are both comfortable and professional, particularly as vaccines prompt people to begin working outside their homes, said Maria Rugolo, a fashion apparel analyst at NPD.

The company’s gambit has helped improve sales and give it a brighter outlook for 2021, though its $12 million in sales last year were far below expectations and it was not profitable. Still, its fate could have been worse.

“I’m most impressed that they’re still around,” said Sucharita Kodali, a retail analyst at Forrester Research. “That’s an accomplishment in an era where literally, the demand for your product has evaporated and well, what do you do with what’s left?”

Ministry of Supply has had to make painful trade-offs. It closed five stores over the summer and its Boston flagship in December, though it hopes to reopen that location this summer. That cut its employee count to 16 from 46 early last year. The company, which has raised $14 million in funding since its founding, has been seeking more money from investors.

“There’s a stress of closing your stores and having to lay off 30 people one by one, each with a phone call,” Mr. Advani said. “There’s the stress of watching what you thought was a sufficient bank account to get you through the next several years turn to one that dries up at a pace that is blistering.”

Ministry of Supply also started selling some products on Amazon in January, which Ms. Kodali said could be a sign of “desperate times.” Digitally native brands typically want to control their customer data and shopping experience. Mr. Advani said the company was proceeding cautiously on Amazon to make up for the loss of stores, adding, “We don’t love the idea of being on Amazon’s marketplace; we also don’t hate it that much if that’s where our customer is.”

Mr. Advani and Mr. Amarasiriwardena have joined many Americans in obsessively tracking the national vaccination rollout, with hopes of increasing sales between Memorial Day and Labor Day.

“We think that ramp will start off with breaking the barrier socially — where you see a lot more people getting on planes, traveling, dinners, perhaps attending meetings together — before offices are opened formally,” Mr. Advani said.

“We don’t know when the market will reopen or when people will leave home again; we also don’t know what that will look like when they do,” Mr. Advani added. But, he said he was convinced the company’s newly adjusted apparel will be tailored to a post-pandemic world.