As far as the law is concerned, there is no reason that Amedeo Rossi can’t reopen his martini bar in downtown Des Moines, or resume shows at his concert venue two doors down. Yet Mr. Rossi’s businesses remain dark, and one has closed for good.

There are no restrictions keeping Denver Foote from carrying on with her work at the salon where she styles hair. But Ms. Foote is picking up only two shifts a week, and is often sent home early because there are so few customers.

No lockdown stood in the way of the city’s Oktoberfest, but the celebration was canceled. “We could have done it, absolutely,” said Mindy Toyne, whose company has produced the event for 17 years. “We just couldn’t fathom a way that we could produce a festival that was safe.”

President Trump and many supporters blame restrictions on business activity, often imposed by Democratic governors and mayors, for prolonging the economic crisis initially caused by the virus. But the experience of states like Iowa shows the economy is far from back to normal even in Republican-led states that have imposed few business restrictions.

A growing body of research has concluded that the steep drop in economic activity last spring was primarily a result of individual decisions by consumers and businesses rather than legal mandates. People stopped going to restaurants even before governors ordered them shut down. Airports emptied out even though there were never significant restrictions on domestic air travel.

States like Iowa that reopened quickly did have an initial pop in employment and sales. But more cautious states have at least partly closed that gap, and have seen faster economic rebounds in recent months by many measures. 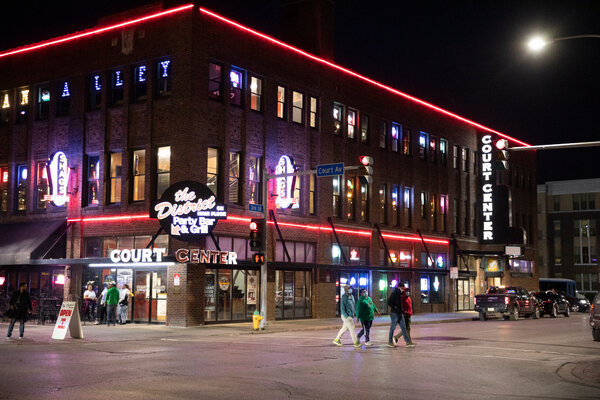 Economists say it is hard to estimate exactly how much economic activity is still being restrained by capacity limits, social-distancing rules and similar policies, many of which have been lifted or loosened even in places governed by Democrats. In most states, restaurants, retail stores and even bars are allowed to operate.

Perhaps the most widespread government action that has hindered economic growth is the decision by many school districts to adopt virtual learning at the start of the school year, which appears to have driven many parents, particularly women, out of the labor force to care for young children who would otherwise be in class.

But as the pandemic flares again in much of the country, most economists agree this much is clear: The main thing holding back the economy is not formal restrictions. It is people’s continued fear of the virus itself.

“You can’t just open the economy and expect everything to go back to pre-Covid levels,” said Michael Luca, a Harvard Business School economist who has studied the impact of restrictions during the pandemic. “If a market is not safe, people won’t participate in it.”

Iowa was one of only a handful of states that never imposed a full stay-at-home order. Restaurants, movie theaters, hair salons and bars were allowed to reopen starting in May, earlier than in most states. Gov. Kim Reynolds has emphasized the need to make the economy a priority, and has blocked cities and towns from requiring masks or imposing many other restrictions.

Even so, Iowa has regained just over half of the 186,000 jobs it lost between February and April, and progress — as in the country as a whole — is slowing. Many businesses worry they won’t be able to make it through the winter without more help from Congress. Others have already failed. Now, coronavirus cases are rising there.

Vaudeville Mews, the small performance hall that Mr. Rossi opened in Des Moines in 2002, was a labor of love even in the best of times. The venue attracted a fan base with its willingness to book independent acts, but it often lost money. Mr. Rossi had been saving up in hopes of buying a new space, but the pandemic ended that dream.

Legally, music venues in Iowa were allowed to reopen in June, but with social-distancing requirements that significantly reduced their capacity. Even if those rules were lifted, Mr. Rossi said, he couldn’t see a path toward reopening safely and profitably anytime soon. This month, he announced that Vaudeville Mews would be closing permanently.

“We couldn’t pay our rent, and it was piling up, and we were constantly still getting drained by internet bill, insurance bill, utility bill,” he said. “Who wants to go into huge debt to float a business that we don’t see any end in sight?”

Mr. Rossi’s nearby bar, the Lift, is officially still in business, but aside from a brief experiment with deliveries, it hasn’t served a drink since March. He has considered welcoming a small number of customers on a reservation-only basis, but so far hasn’t figured out how to reopen in a way that would both be safe and not cost him even more than staying closed.

“We felt it would be worse for us to reopen,” he said.

At Court Avenue Restaurant & Brewing Company, around the corner from Vaudeville Mews and the Lift, the lack of nightlife is taking a toll on business. So is the lack of the normal lunchtime crowd, with many office employees still working from home. Court Avenue reopened in May, but has regained just 30 to 40 percent of its pre-pandemic sales, according to the owner, Scott Carlson.

“Even if the governor said, ‘Hey, we’re taking away all restrictions and all mandates and all recommendations,’ our numbers wouldn’t change, not very dramatically,” he said.

Iowa has outperformed many other states economically during the pandemic, at least by some measures. The unemployment rate capped out at 11 percent in April — below the 14.7 percent hit by the country as a whole — and it has fallen quickly, to 4.7 percent in September.

But economists attribute Iowa’s success primarily to its favorable mix of industries. The state relies more heavily than most on agriculture and manufacturing, which were comparatively insulated from the virus.

Vulnerable industries like tourism, hospitality and retail sales are struggling in Iowa as they are everywhere else. Data compiled by researchers at Harvard and Brown Universities from private sources shows that consumer spending has rebounded more slowly in Iowa than in neighboring states.

“Retailers are still having a tough go of it in Iowa,” said Ernie Goss, a Creighton University economist who studies Iowa and the Midwest. “You’re talking about individuals who regardless of regulations are not going back in a restaurant right now.”

Mike Draper owns a chain of T-shirt shops with three stores in Iowa and others in Omaha, Chicago and Kansas City, Mo. Customer traffic is down 30 to 50 percent in all of them, he said, with no consistent patterns based on the rules local governments have imposed.

“It has almost nothing to do with regulations,” Mr. Draper said. “It’s really driven by people’s mentality more than regulations.”

There is little doubt that restrictions are restraining some economic activity, particularly in parts of the country that have strictly limited restaurant capacity and indoor gatherings. Local business owners say that restaurants are noticeably busier in Davenport, Iowa, than across the Mississippi River in Moline, Ill., where rules on mask-wearing and social distancing are stricter and more consistently enforced, although business is not back to normal on either side of the river.

But greater activity can also come with a cost, to both public health and the economy. When college campuses in Iowa reopened in August, students packed into bars and nightclubs — and coronavirus cases quickly began to rise. Governor Reynolds shut down bars in several college towns for more than a month.

For some workers, Iowa’s situation is the worst of both worlds: They are back at work, putting them at risk of contracting the virus, but don’t have enough customers to make a living.

Ms. Foote, 24, had worked at the beauty salon for just a few weeks when it shut down because of the pandemic. The job was the fulfillment of a longstanding dream — after years of juggling school and low-wage jobs, she was finally working full time and on track to get benefits.

Even so, when the salon reopened in the spring, she was scared to return to work. And once she did go back, there was little work for her.

“I just kind of sit around and don’t do anything,” she said. “People are scared to go into the salon and sit for an hour.”

Ms. Foote said she was taking home just $200 for each two-week pay period, meaning she again needs to supplement her income with part-time jobs. But she isn’t sure she should be rooting for business to pick up.

“I don’t see how me going to the salon more often and exposing myself is going to make things better,” she said. “I don’t think that’s safe, personally.”