(Reuters) – Amazon’s moves to reduce strain on its grocery businesses by putting new online shoppers on wait lists and switching more Whole Foods resources to filling orders, is unmasking limitations at the company that was expected to upend the supermarket industry. 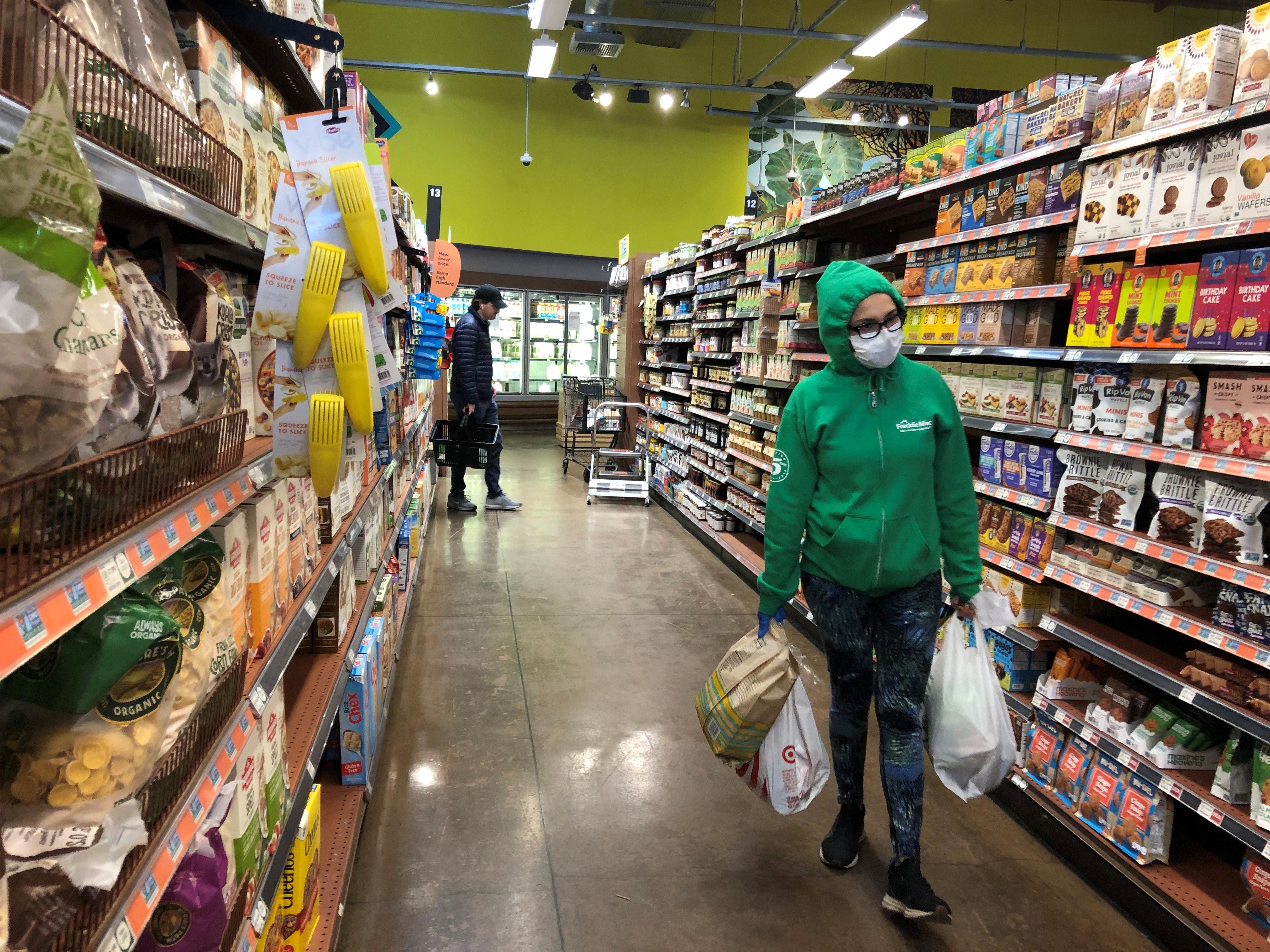 The coronavirus pandemic should be Amazon’s moment to shine. Some 90% of U.S. shoppers are under stay-at-home orders and Amazon.com Inc offers grocery delivery through its 487 U.S. Whole Foods stores.

Instead, Whole Foods has been overwhelmed. Amazon Prime subscribers, who pay $119 a year for free delivery, are having difficulty finding Whole Foods delivery windows, according to interviews with a dozen customers and numerous posts on social media. And when their orders do arrive, many desired products are unavailable, they say.

“I’m really surprised that they weren’t able to scale for this. I was expecting them to perform better. It seems like more than anything Amazon is a supply-chain company,” said Ellen Sullivan, 37, a Chicago-based office manager.

Sullivan was a regular Amazon food delivery user before COVID-19 spread widely in the United States. Her last successful order was March 12, and even then, 10 of the 27 items were sold out and had to be replaced.

Amazon told Reuters the setbacks are due to the spike in demand and social distancing constraints in its facilities and stores.

Amazon has said it would hire an additional 75,000 people for jobs ranging from warehouse staff to delivery drivers and switched a California Amazon grocery store and a Manhattan Whole Foods to online-only as demand for orders surges.

Whole Foods said its distribution network is strong and that it is working with suppliers to overcome increased demand and supply chain constraints without compromising quality standards that “further limit the number of products we can source”.

The world’s biggest online retailer sent a shock through the stodgy U.S. supermarket business in 2017, when it bought Whole Foods for $13.7 billion. Some experts predicted that Amazon would hasten the move to online grocery shopping and doom traditional operators like Walmart Inc and Kroger Co.

But now Amazon is buckling under unprecedented COVID-19 supply-and-demand disruptions that sent the entire grocery industry scrambling to adapt. After expanding and speeding up Whole Foods delivery, the company is retrenching.

On Sunday Amazon told Reuters it would put new grocery delivery customers on a wait list and curtail shopping hours at some Whole Foods stores to focus on orders from existing online customers.

The company – which also delivers food from its own warehouses through Amazon Fresh – last month suspended its Prime Pantry delivery service for non-perishable groceries.

“They were separating themselves from the pack and that’s not happening anymore. This doesn’t happen to Amazon … they don’t screw up like this,” said Bill Bishop, co-founder of supermarket consultancy Brick Meets Click. Amazon inherited – and failed to address – many of the problems that are now plaguing its grocery business, a half dozen experts told Reuters.

In particular, they said the e-commerce giant with $55 billion on its balance sheet did not fortify Whole Foods’ foundation, which relies on outdated technology, outside suppliers and real estate unsuited for the unprecedented surge in demand.

As a result, the chain’s systems “creak very badly under the strain,” Bishop said.

Walmart and Kroger are also fighting to keep in-demand products like flour, toilet paper and cleaning supplies on shelves, but their regular technology investments and tight control over supply chains have been a competitive advantage over Amazon and Whole Foods, experts said.

Those companies – the top two U.S. grocery sellers – operate fleets of trucks and own dozens of large warehouses, while Amazon is more apt to outsource.

UNFI told Reuters it has “greatly increased” routes and hired over 1,000 employees to support clients.

Whole Foods has 10 small regional warehouses for perishables like fruit, vegetables and meats. UNFI has a network of 59 distribution centers, which average about 500,000 square feet.

Walmart and Kroger, which have significantly more stores, have bigger distribution centers designed to swiftly move pallets of goods.

While a Walmart distribution center can deliver two full truckloads of goods to a store from a single driver, Whole Foods has difficulty digesting even one truckload, Strategic Resource Group managing director Burt Flickinger said. 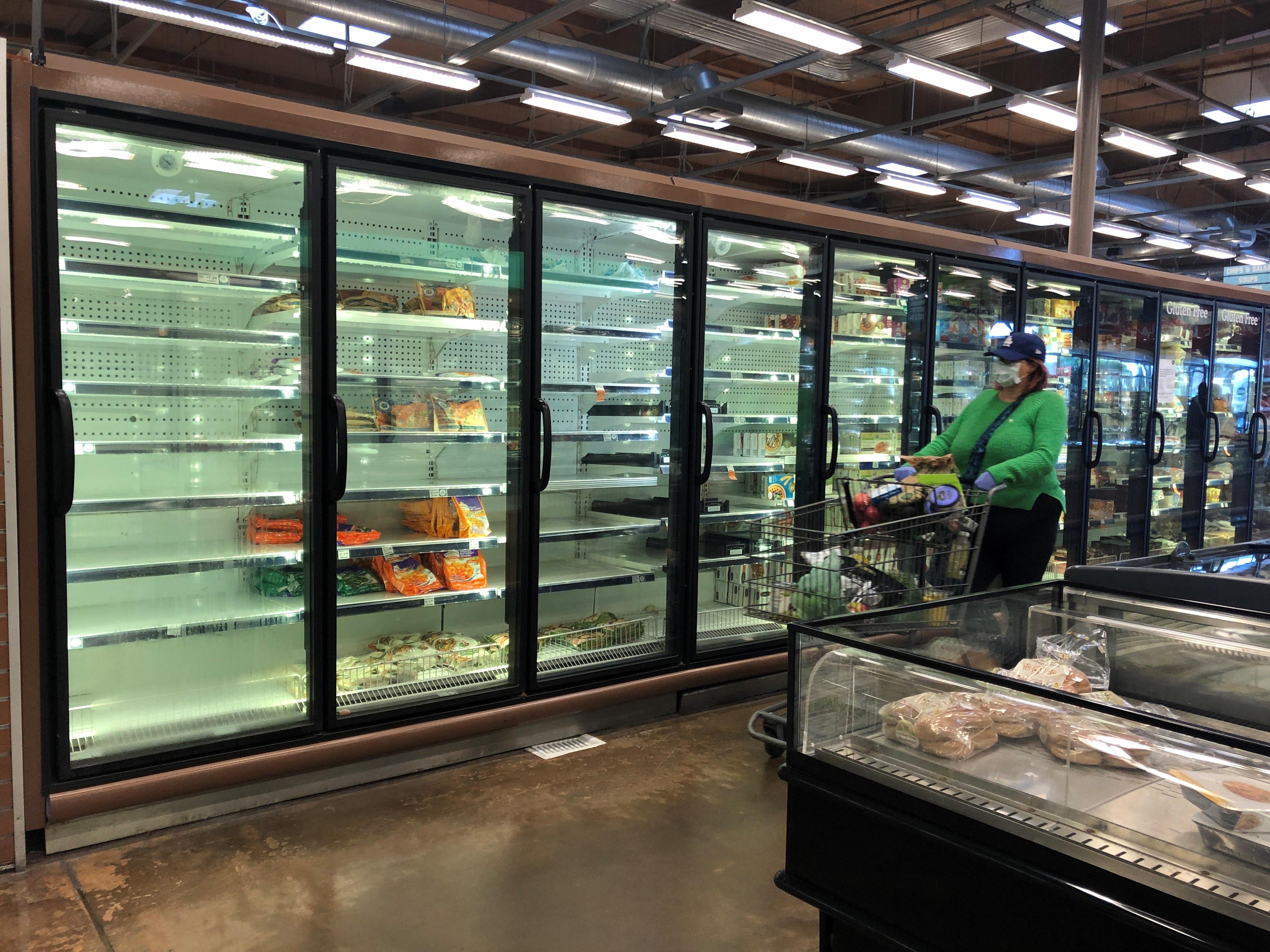 Whole Foods’ “center store was never the big money generator for them,” supermarket analyst David Livingston said, referring to the area where dry groceries are sold.

Indeed, many stores have wine bars, hot food stations and cafes that made them popular gathering places but are of little use right now.