While February is typically a quiet time for the Oxfordshire retail village, staff the BBC spoke to said visitor numbers were much lower than usual.

Cut-price handbags and coats draw thousands of Chinese tourists to the retail outlet each year.

But the number of those diagnosed with coronavirus in China has spiked, and this has taken its toll on popular tourist destinations.

Eager shoppers, many of them from Asia and the Middle East, wear face masks and apply hand sanitiser on the Thursday morning train.

Mixed in with commuters, some snack on pastries and carry Oxford Street-branded tote bags.

But fashion buyer Xia Yae says she has noticed a “lot less people” travelling to the retail village in the last two weeks.

Purchasing designer items for South Korean clients from brands including Gucci, Yves Saint Laurent and Burberry, Xia says that Bicester retailers are having a “tough time”. 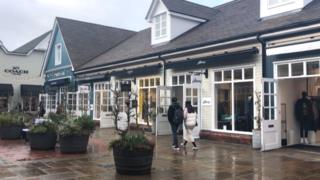 “Usually, fashion buyers would be restricted on how many discounted items they can buy. But now, they’re allowed to buy as many as they want – the retailers clearly need to make more money,” she adds.

More than seven million people visited Bicester Village in 2019, according to its owner Value Retail. It was established in 1995 by American Scott Malkin, and reported sales of £259m in 2018.

The Hwang family are visiting Bicester as part of their week-long holiday to London.

The daughter says the family “aren’t worried” about the coronavirus outbreak.

They are looking forward to searching through discounted items in Burberry. Being able to claim back the 20% VAT available to non-EU visitors is also a perk.

Wearing traditional red uniforms resembling those of bellboys, Bicester Village “hosts” greet them as they arrive and help other tourists buy tickets for travel.

Announcements in Mandarin and Arabic are made over the tannoy as the train pulls in. Tourists make their way through a neon walkway and past an empty car park to the 160 shops on-site.

Few shoppers walk along the artificial streets between pastel-coloured storefronts.

A shop assistant at one store says they are “concerned” about how reliant Bicester Village is on tourism.

More than 72% of Chinese visitors to the UK go shopping during their trips, according to research by VisitBritain.

Staff say Chinese tourists are the biggest group for the luxury shop.

They add that the last two weeks have been “quiet”, estimating the branch has seen a drop of about 85% in the number of Chinese customers entering the store.

They say: “It’s been a double whammy. Storm Ciara also meant a lot of the trains and coaches from London were cancelled. It’s really scary.”

Another sales adviser at the high fashion label Balenciaga says the last week has been “very quiet” in the shop.

Many of the people the BBC spoke to requested not to be named as they do not have permission to speak to the press.

He says he uses hand sanitiser every five minutes. Stations are placed at the back of the store for staff, away from customers.

In several stores, retail assistants outnumber customers. They huddle for chats near the doors of Givenchy, Diesel and Karl Lagerfeld.

Four staff members in Burberry wear surgical masks, and tell the BBC they’ve been “advised not to speak to journalists”.

The complex is privately owned and restricts filming. The BBC was asked not to speak to “guests” by security at the site.

Dominic Hare, chief executive of the nearby Blenheim Palace, is hoping that any shortfall in visitor numbers will eventually be recouped.

He said: “We need to ensure that these are visits deferred, not deleted.”

Mr Hare said that in the meantime they were “working hard to attract people from short-haul markets, as well as the UK.

“We’re optimistic we can make it up from the local audience – and that’s important because the jobs in the wider economy depend on us, and we depend on them too.”

For now, Bicester Village shoppers seem happy enough as they wander down the makeshift streets. One tells the BBC through Google Translate that there are fewer people to fight for bargains.

Its owner Value Retail has not yet responded to the BBC’s request for comment.