WASHINGTON — President-elect Joseph R. Biden Jr. on Thursday proposed a $1.9 trillion rescue package to combat the economic downturn and the Covid-19 crisis, outlining the type of sweeping aid that Democrats have demanded for months and signaling the shift in the federal government’s pandemic response as Mr. Biden prepares to take office.

The package includes more than $400 billion to combat the pandemic directly, including money to accelerate vaccine deployment and to safely reopen most schools within 100 days. Another $350 billion would help state and local governments bridge budget shortfalls, while the plan would also include $1,400 direct payments to individuals, more generous unemployment benefits, federally mandated paid leave for workers and large subsidies for child care costs.

“During this pandemic, millions of Americans, through no fault of their own, have lost the dignity and respect that comes with a job and a paycheck,” Mr. Biden said in a speech to the nation. “There is real pain overwhelming the real economy.”

He acknowledged the high price tag but said the nation could not afford to do anything less. “The very health of our nation is at stake,” Mr. Biden said, adding that it “does not come cheaply, but failure to do so will cost us dearly.”

Mr. Biden took swift action to shape the agenda at a time of national crisis and a day after President Trump’s impeachment in the House. While it reflects the political shift in Washington as Democrats take control of Congress, support for Mr. Biden’s program will immediately run into challenges, starting with the possibility that a Senate trial of Mr. Trump might delay its passage.

It is also unclear how easily Mr. Biden can secure enough votes for a plan of such ambition and expense, especially in the Senate. Democratic victories in two Georgia special elections last week gave Mr. Biden’s party control of the Senate — but only with a 50-50 margin after Vice President-elect Kamala Harris’s tiebreaking vote. Mr. Biden will have to compensate for any defecting moderate Democrats with Republican votes at a time of scarce bipartisanship.

Mr. Biden said that lawmakers would need to come together for the good of the country, and that “unity is not some pie in the sky dream — it’s a practical step to getting the things we have to get done as a country, get done together.”

His speech on Thursday came at an incredibly challenging moment, as virus cases continue to climb, millions of workers remain sidelined and America’s partisan divisions are threatening to tear it apart. A week after a mob stormed the Capitol to disrupt Congress’s certification of Mr. Biden’s win, Washington has come to resemble an armed camp, with steel barricades being erected across the city and armed law enforcement policing the streets.

More than 20,000 National Guardsmen are expected to flood Washington before Mr. Biden’s swearing-in on Jan. 20.

The economic rebound from the pandemic recession has also reeled into reverse amid a winter surge of the virus and new waves of restrictions on economic activity in cities and states.

The Labor Department reported on Thursday that 1.15 million Americans filed new unemployment claims in the first full week of the new year, a 25 percent increase from the previous week. Another 284,000 claims were filed for Pandemic Unemployment Assistance, an emergency federal program for workers like freelancers who do not normally qualify for jobless benefits. The nation shed 140,000 jobs in December, the department reported last week.

Mr. Biden’s aides say the urgency of the moment drove the president-elect to propose a significantly larger economic jolt than what the Obama administration pushed through upon taking office amid a recession in 2009. The Biden proposal is more than 50 percent larger than the Obama-Biden stimulus, after adjusting for inflation, and it comes on top of several trillions of dollars of economic aid that Congress approved last year under Mr. Trump.

The package reflected the scope of the challenge facing the economy and the nation’s health system. In a briefing on Thursday, one Biden official noted that the existing national planning and infrastructure for mass vaccinations and testing was far less developed than the incoming White House team had anticipated.

Mr. Biden detailed his so-called American Rescue Plan in an evening speech in Delaware, effectively kicking off his presidency and placing him in the brightest spotlight since his nomination acceptance speech last summer at the Democratic National Convention. 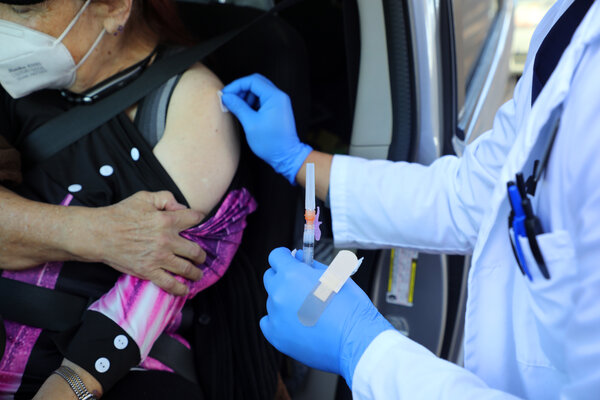 The president-elect struck an urgent, but optimistic tone, saying the United States could overcome its current challenges.

“Out of all the peril of this moment, I want you to know I see the promise,” Mr. Biden said. “I’m as optimistic as I’ve ever been.”

The plan was lauded by progressive groups as well as by the nation’s leading business lobby, the U.S. Chamber of Commerce, which was often at odds with the Obama administration over spending and regulations. “We applaud the president-elect’s focus on vaccinations and on economic sectors and families that continue to suffer as the pandemic rages on,” the chamber said in a statement.

Republicans were largely silent on the plan, which includes the type of state and local aid that became a sticking point in last year’s stimulus negotiations. Congress was able to agree on a $900 billion package in December only after such aid was excluded. But Mr. Biden outlined his rationale for including such funding, saying it was vital to avoiding cutbacks and layoffs that would set back the fight against the virus and further damage the economy.

“Millions of people putting their lives at risk are the very people now at risk of losing their jobs: police officers, firefighters, all first responders, nurses, educators,” Mr. Biden said.

Mr. Biden’s “rescue” proposal, which would be financed entirely through increased federal borrowing, flows from the idea that the virus and the recovery are intertwined and that the economy cannot rebound without mass vaccine deployment.

“What the economy needs is a successful rollout of the vaccines, and reduction in the risks of social and economic activity,” said Aaron Sojourner, a labor economist at the University of Minnesota’s Carlson School of Management who served in the White House Council of Economic Advisers under the Obama and Trump administrations. “That will go a long way toward promoting recovery. It won’t go all the way, but it will go a long way.”

Mr. Biden, who has promised to get “100 million Covid vaccine shots into the arms of the American people” by his 100th day in office, said last week that he intended to release nearly all available coronavirus vaccine vials once he takes office, rather than holding some back as the Trump administration had been doing.

The $20 billion “national vaccine program” he announced on Thursday envisions community vaccination centers around the country. In recent speeches, he has said he would like to see mass vaccination sites in high school gymnasiums, sports stadiums and the like, perhaps staffed by the National Guard or employees of the Federal Emergency Management Agency.

Mr. Biden also called for a “public health jobs program” that would address his goals of bolstering the economy and the Covid-19 response while also rebuilding the nation’s fragile public health infrastructure. The proposal would fund 100,000 public health workers to engage in vaccine outreach and contact tracing.

At the same time, Mr. Biden is keen on addressing the racial disparities that have been so painfully exposed by the coronavirus pandemic, which has disproportionately claimed the lives and jobs of people of color. He pledged to increase funding for community health centers and to fund efforts to mitigate the pandemic in prisons and jails, where Black people and Latinos are overrepresented.

In his remarks, Mr. Biden lamented a “growing hunger crisis,” particularly among minority communities, saying: “More than one in five Black and Latino households in America report that they do not have enough food to eat. It’s wrong. It’s tragic. It’s unacceptable.”

He proposed a wide range of efforts to help those who have suffered the most in the economic pullback. His plan would provide emergency paid leave to 106 million Americans, regardless of the size of their employer, a proposal that many congressional Republicans worked to pare back in a stimulus bill passed last spring. And it would extend tax credits to many families to offset up to $8,000 in annual child care costs.

It provides billions of dollars in rental aid and would give grants to millions of the hardest-hit small businesses. It also temporarily increases the size of two tax credits in a manner that would effectively provide more cash from the government to low-income workers and families. And it would extend expanded unemployment benefits through the end of September, with an extra $400 weekly supplement.

Mr. Biden also called on Congress to raise the federal minimum wage to $15 an hour, a priority he outlined during his campaign.

Mr. Biden plans to unveil another, larger set of spending proposals in February, and he began laying the groundwork to finance those efforts by raising taxes on corporations and the rich. He drew a sharp contrast between the suffering of low-wage workers and those struggling without a paycheck with the wealthiest Americans, saying there is a “growing divide between those few people at the very top who are doing quite well in this economy — and the rest of America.”

“Just since this pandemic began, the wealth of the top 1 percent has grown by roughly $1.5 trillion since the end of last year — four times the amount for the entire bottom 50 percent,” he said.

The second package is expected to be centered on job creation and infrastructure, including hundreds of billions of dollars of spending on clean-energy projects like electric vehicle charging stations, along with health care and education spending.

Mr. Biden has said he will work to build Republican support for his plans, and he will need 10 Republican votes in the Senate to overcome a filibuster. But top Democrats in the House and Senate are preparing to pivot quickly to a parliamentary process known as budget reconciliation in the event they can get only a simple majority in the Senate. Republicans used the procedure to bypass a filibuster and approve Mr. Trump’s signature tax cuts in 2017.

Republicans’ refusal to consider a stimulus package in excess of $1 trillion held down the size of the last congressional relief bill, passed in December. Mr. Biden’s aides said Thursday that they were confident that the nearly $2 trillion package he had proposed would find wide support among Democrats at a time when interest rates remain low and many economists are urging lawmakers to deficit spend in order to promote economic growth.