Jeff Daniels agreed to play James Comey in Showtime’s “The Comey Rule” on the promise that the four-hour mini-series would be released ahead of the election. The documentary filmmaker Alex Gibney worked at a breakneck pace to complete his feature-length film “Totally Under Control,” an indictment of the Trump administration’s handling of the coronavirus, so it could debut before Nov. 3.

And Aaron Sorkin began courting streaming companies at the end of May when it became clear that the global pandemic would impede Paramount Pictures’ ability to release his film about protests at the 1968 Democratic convention in theaters this year.

For Mr. Sorkin, the decision to forgo a traditional theatrical release — “The Trial of the Chicago 7” is available on Netflix starting Friday — was all about being part of the conversation when the conversation was happening.

“There is going to be exhaustion a year from now,” he said in a recent interview. “Now is when you want to release it.”

Hollywood rarely shies away from politics. This election cycle, however, a plethora of movies, documentaries and TV mini-series are hitting the marketplace with immediate relevance. That stands in contrast to the usual industry practice of waiting for events to pass into history before depicting them onscreen. Think Oliver Stone’s “JFK” or Spike Lee’s “Malcolm X.”

(Mr. Sorkin’s “Chicago 7” falls into that category, too, though the nationwide protests this summer give it urgency, as does Mr. Sorkin’s meant-for-the-moment dialogue like having Abbie Hoffman, one of the Chicago 7 activists, say when he testifies during the trial, “I think the institutions of our democracy are wonderful things which right now are populated by some terrible people.”) 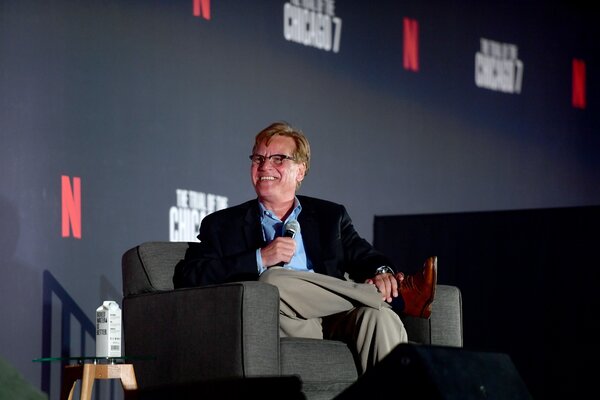 “I can’t think of any writer-director who ever had the opportunity I had, to write about the collapse of a building while it was still collapsing,” said Billy Ray, who began working on “The Comey Rule” in 2018 when Mr. Comey, the former F.B.I. director, released his memoir, “A Higher Loyalty.” The mini-series, which features Brendan Gleeson as President Trump, generated mostly positive reviews, and the first episode was seen by 2.5 million people across various platforms and the second by 2.1 million.

Whether these projects can influence the election is another matter. And with less than three weeks until Election Day, the window to reach undecided voters is quickly closing anyway.

“The percentage of voters who are swayable in the states that matter are 2 to 5 percent,” said Tanya Somanader, the chief content officer for Crooked Media, left-leaning political content company, and a strategist in the Obama administration. “And that number is collapsing by the day because people are voting early.”

That won’t stop Hollywood from trying. Last month, Amazon Studios released the documentary “All In: The Fight for Democracy,” which both tracks Stacey Abrams’s run for governor in Georgia in 2018 and its contested result and examines the history of voter suppression in the United States. The film was accompanied by a 22-city bus tour and an extensive voter-registration drive.

“We are hoping to inspire people to fight for what is theirs,” said Liz Garbus, who directed the film with Lisa Cortés. “That means voting.”

On Wednesday, HBO will debut “537 Votes,” a documentary about the disputed 2000 presidential election. The director Adam McKay (“Vice”) is the executive producer. On the same day, the magazine The Atlantic will unveil its first documentary, “White Noise,” about the rise of far-right nationalism.

Showtime will air Alexandra Pelosi’s “American Selfie: One Nation Shoots Itself,” an examination of the country’s hyperpartisan landscape over the past 12 months, next Friday, too. “Us Kids,” a documentary centered on the teenagers turned activists from Marjory Stoneman Douglas High School and the March for Our Lives movement, will become available via Alamo Drafthouse Virtual Cinema on Oct. 30.

Mr. Gibney began his “Totally Under Control” project in May after the coronavirus ripped through New York, killing one of his friends and putting another one on a ventilator. He and his co-directors, Ophelia Harutyunyan and Suzanne Hillinger, trace the administration’s delayed response, its failure to secure proper protective equipment and the subsequent politicization of science regarding the pandemic.

The documentary features, among others, Dr. Rick Bright, the whistle-blower from the Department of Health and Human Services; Kathleen Sebelius, the department’s secretary under President Barack Obama; and Max Kennedy Jr., a grandson of Robert F. Kennedy who sent an anonymous complaint in April to Congress detailing the “dangerous incompetence” of the Trump coronavirus task force, for which he was a volunteer.

“I hope it makes a huge difference,” Mr. Gibney said of his film, which became available on demand on Tuesday and will stream on Hulu next week.

“It’s a crime film, and the crimes we discovered were fraud and negligence,” he added. “If you are looking at it from the perspective of ‘Did this administration do all it could to protect American citizens?’ — that’s an important piece of information to have when you are going to the voting booth.”

Hollywood’s liberal leanings have long been known, and that hasn’t changed this year. Last month on Instagram, Dwayne Johnson announced his support for Joseph R. Biden Jr., the Democratic presidential nominee. Mr. Johnson was soon followed by Taylor Swift. Last week, a group of naked actors including Sarah Silverman, Mark Ruffalo and Tiffany Haddish demonstrated in a viral video the proper way to send in a mail-in ballot.

Their efforts are not usually welcomed by those on the right. “Hollywood can be very off-putting to the other side, who are very much about staying in your lane,” Ms. Somanader of Crooked Media said. “It’s not that they actually reject entertainment, but rather they feel they are being rebuked by the people who entertain them.”

That’s not stopping Mr. Sorkin, who argues that actors have as much of a right to their political opinion as dentists do. The day before “The Trial of Chicago 7” became available on Netflix, HBO Max aired the “The West Wing Special,” a restaging of an “ode to voting” episode of the NBC show Mr. Sorkin created in 1999, to promote voting via Michelle Obama’s When We All Vote initiative.

With “The West Wing” often categorized as a “liberal fantasy,” Mr. Sorkin is bracing for a withering response from conservatives. He even wrote his defense into the introductory remarks that the actor Bradley Whitford read at the start of the special:

“We understand that most people don’t appreciate the benefit of unsolicited advice from actors, and if HBO Max was going to point a camera at the 10 smartest people in America, we would gladly clear the stage for them,” Mr. Whitford said. “But the camera is pointed at us, and we think that the risk of appearing obnoxious is too small a reason not to do something if we can get even one person to the polls.”