More than 60 years ago, Volvo introduced the world to the three-point seatbelt, a safety feature so standard now that it’s almost an afterthought. Over the ensuing years, Volvo, the Swedish maker of bland, boxy sedans, gained a reputation for safety above all else.

To be in a Volvo meant riding in a warm, protective cocoon, staid but reliable for you and your family. Cool and exciting, it wasn’t.

“Both Volvo and Polestar are Scandinavian, and we share values,” said Thomas Ingenlath, Polestar’s chief executive. “But we’re sportier, with a performance element. Volvo would never aim for the driver experience as the focus. They would say, ‘No, we shouldn’t do that.’”

The all-electric Polestar 2 is available from the company’s first four dealerships in Los Angeles, New York and San Francisco. An additional seven shops are expected by mid-2021, which should put 85 percent of buyers who have reserved a Polestar 2 within 150 miles of one. 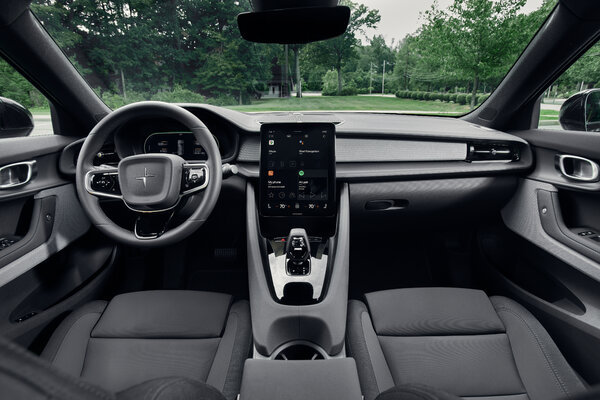 The new model joins the $155,000 limited-run Polestar 1 hybrid as the group’s first volume vehicle. The Polestar 3, an electric S.U.V. based on the platform used for Volvo’s XC90, is under development with no announced sale date. The company also recently announced that it would develop and produce an additional sedan, the Precept. Its interior will be constructed from such materials as recycled PET bottles, reclaimed fishing nets and recycled cork vinyl.

Polestar, which along with its parent is owned by the Chinese manufacturer Geely, joins a host of other brands from Europe and Japan that aim luxury vehicles at those who find the companies’ main offerings boring.

But Polestar claims — unlike Volkswagen’s Audi, Nissan’s Infiniti and Toyota’s Lexus brands — that it is working to be more adventurous. “We’ll have elements of joy and surprise unthinkable in the German context,” Mr. Ingenlath said.

Polestar shuns the traditional cues that buyers see as defining a luxury vehicle. No glossy wood-grain interiors, nor lots of chrome or infinite color variations. Instead, much of the interior, including the seats and steering wheel, is clad in a fiber made solely from vegan materials and inspired by the look and feel of wet suits. When wood is used, it’s reclaimed material. The vehicle can be ordered in one of only five colors.

“We’ll have no cheesy chrome letters on our car,” Mr. Ingenlath said. There are decals on the doors instead.

The company is steering buyers away from leather seating — though it is available as a $4,000 option — because it wants customers to be aware of how that leather was created, how the animal lived and died. “You should not expect leather to be standard,” Mr. Ingenlath said.

Design cues peg the vehicle in the Volvo cinematic universe. Both marques share the T-shaped “Thor’s Hammer” headlights. The Polestar’s taillamp strip looks like a horizontal derivative of the Volvo XC40. And the overall exterior shape echoes its parent company’s sedans.

To sell its vehicles, Polestar is taking a page from Tesla and Apple, forgoing dealer showrooms in favor of what it calls Spaces — environments free of sales staff that allow customers to inspect the vehicles without someone breathing down their neck. To increase the perception that a Polestar is a work of art and not just a commodity, parts such as wheels and electric motors are even displayed in museum-like cases.

Polestar’s software, like Tesla’s, can be upgraded over the air to add new features. Unlike Tesla, Polestar won’t feature “fart mode.” “We’ll embrace elements that add fun to your life, but in our own way,” Mr. Ingenlath said.

Future tech could include video streaming when the vehicle is stopped; eye tracking to detect health or wakefulness, with solutions to stay alert; and interior climate preconditioning based on a knowledge of the driver’s habits and driving schedule.

While other manufacturers are playing up a similar future, the Polestar 2 is the first vehicle to exclusively employ the Google Android Automotive System as the brains behind its infotainment, system operations and navigation. Using the center-mounted touch screen, drivers can call up familiar Google tasks and download over 200 Android apps, including ones for AM and SiriusXM radio stations.

The Google smartphone app prompts the vehicle to recognize the driver so it can automatically adjust the seat position and show that person’s preferred touch-screen apps on the display.

With a few days behind the wheel, I found the Polestar’s driving characteristics to really shine. As with most pure-electric vehicles, acceleration is breathtaking — 0 to 62 miles per hour in 4.7 seconds, faster than a 2020 BMW 840i Gran Coupe M-Sport. Seating is supportive, and the vehicle can easily take tight turns at much higher than posted speeds, with no tire squeal or loss of traction.

The Polestar’s rapid acceleration came in handy while driving down a winding almost-empty lane in the Malibou Lake area in the Santa Monica mountains. Coming upon a driver traveling at half the speed limit, I was able to overtake her on a curve that had little forward visibility, something I never would have tried even in my own internal-combustion “sports sedan.”

The cabin is spacious, and the trunk big enough to fit a large swivel office chair once the rear seats were folded down.

The Launch Edition starts at $61,200, including delivery; a potential $7,500 federal tax credit would reduce the cost to $53,700. For this and all E.V.s, a Level 2 home charging station is a must; with it, charging to 80 percent of its Environmental Protection Agency-rated 275-mile range will take about eight hours.

As with every electric vehicle I’ve tested, that range is optimistic. After I drove 55 miles in a mix of city and freeway traffic, my range had dropped by 70 miles.

Those who opt for the $5,000 performance package get Öhlins dual flow valve dampers, Brembo front brakes, 20-inch wheels and what some may find to be gaudy gold seatbelts.

A glass roof traveling the length of the interior is standard in the Launch Edition. There’s no sun shade, as the glass filters out 99.5 percent of ultraviolet light, according to the company. Still, I found having the bright sun always shining on my head to be an annoyance, and with Southern California typically devoid of clouds, that feature would be a deal-breaker for me.

On the other hand, what may be a deal-clincher for some is the vehicle’s understated yet attractive design, one that garnered much attention over a weekend’s driving. My test vehicle was noticed multiple times, including by several people who flagged me down to discuss the car. I received more attention in the Polestar in two days than I did after a week’s worth of driving an Aston Martin DB9 and a Lamborghini Huracán.

Perhaps that’s because in Los Angeles, even high school students drive Range Rovers and Maseratis. But with just a few thousand available this year, the Polestar looks as if it will stand out for some time to come.