ENDICOTT, N.Y. — The sidewalks along Washington Avenue in Endicott, N.Y., are empty enough that bicycles cruise their length with smooth sailing. But 40 years ago, when an IBM plant hummed with thousands of employees, the cyclists might have picked a different route.

“During lunch hour, you couldn’t see down the street because there were so many people,” said Mary Morley, the owner of Angeline’s Flowers, one of the few storefronts without a “for rent” sign. “It used to be quite the place.”

Wistfully recalling times gone by has been a pastime in the Southern Tier and Hudson Valley areas of New York State since IBM began slashing operations and shuttering factories in the 1980s. Indeed, the entire region was once sort of an extended company town for the tech giant, which started there and spurred much of its housing and retail growth. When Big Blue left, economic pain ensued.

But the large campuses that remain hold keys to an economic rebound, in places like East Fishkill, Ulster and Endicott, say business leaders working to reinvent them.

Lined with warehouses, well served by utilities and near major highways, the campuses are ideally suited for tenants involved in large-scale production and shipping, a segment of the industrial market that has grown during the pandemic, they say.

And the pandemic-related relocation of New Yorkers to points north has put a possible new work force within reach, adding momentum to redevelopment efforts.

“Corporations shouldn’t be let off the hook so easily for just fading away. Taxpayers paid for all their roads,” said Lynne Ward, an executive vice president at National Resources, a developer based in Connecticut that buys empty industrial parks across the country. “But some great infrastructure has been left behind.”

In East Fishkill, the Dutchess County town where IBM once had more than 600 acres along Interstate 84, the good bones seem particularly attractive to food-related businesses. Since National Resources bought a 300-acre plot in 2017 and renamed it iPark 84, space has been leased to companies that make cookies, cocktail syrups and crepes.

Joining them this fall in a 3,000-square-foot berth will be Ronnybrook Farm Dairy, a milk provider based nearby. (IBM is also an iPark tenant, and Global Foundries, the semiconductor manufacturer that purchased most of IBM’s chipmaking assets in 2014, owns a 160-acre piece.)

To create a buzzy scene, National Resources is constructing a barnlike wing off one of its manufacturing buildings so all the food items produced there can be offered to the public in a grocery setting, Ms. Ward said.

The complex, which cost $300 million to purchase and redevelop, is 90 percent leased, she said. Housing and hotels are also being considered for the site, she added. 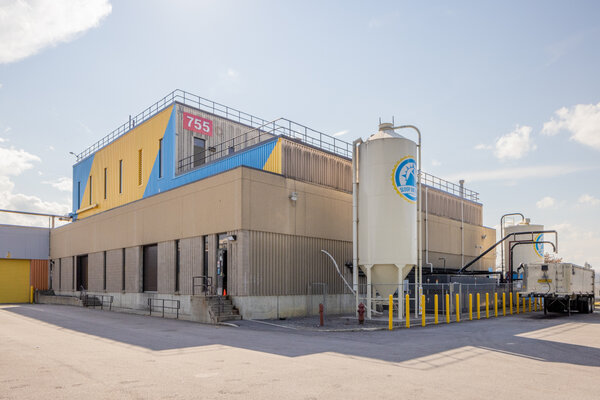 “A revitalization is happening here, and it’s necessary,” said Adam Watson, a co-founder of Sloop Brewing, which moved to iPark in part for its thick floors, tall ceilings and easy wastewater disposal. There’s also a bar, whose transparent surface is embedded with circuit boards discovered in a renovation.

“So many of our customers wind up telling us stories about how they worked in this building or that building,” Mr. Watson said.

Other sections have also been busy. A 15-acre warehouse for Amazon is being developed on a 124-acre parcel on the eastern side of East Fishkill by a team that includes the industrial-focused Bluewater Property Group. The deal, which came with property tax breaks, will create 500 full-time jobs, according to town officials, who rezoned the entire property in 2014 to lure new users. But the campus, which once made chips for the Sony PlayStation 3, employed 22,000 IBM workers in its heyday, National Resources said. Bluewater had no comment, and an IBM spokesman declined to provide historical employment numbers.

Installing non-IBM tenants, of course, is no guarantee of success. Amazon’s facility will stand on a site owned a decade ago by the Linuo Group, a Chinese solar-panel manufacturer. Similarly, an adjacent 33-acre parcel is supposed to give way to the Sports KingDome, an athletic facility, but little construction has happened since the project was announced in 2015.

Across the Hudson River in the town of Ulster, redevelopment has also been tricky, though a fresh marketing push is raising hopes. In the late 1990s, a project called TechCity promised to transform a large chunk of IBM’s 258-acre campus.

But conflicts erupted between the developer and officials over unpaid taxes, and a required cleanup of ground pollution went uncompleted, prompting delays. Today, signs at TechCity, which sprawls beneath a rusted water tower, attest to a once-robust tenant list, though only a handful of companies remain. But this week, Ulster County filed to foreclose on the property over that $12 million unpaid tax bill.

While the process plays out, attention is being focused on a different piece of TechCity, an 80-acre, two-building parcel that officials seized in 2019 over a similar tax issue. This spring, the county received about two dozen proposals to redevelop or lease the site, including from a bakery, a nonprofit arts group and a local farm. Officials will announce their picks within weeks; many winners are expected, they said, because having a single occupant for all that space proved too risky.

The 7,100 employees who worked at IBM, which closed that location in 1995, were the driving force behind the area’s ranch-style houses and strip malls, said Ward Mintz, a local historian. Now, efforts to reintroduce residents to the somewhat desolate area are gaining traction with concerts in the vast lots where IBM-ers once parked their cars, en route to making typewriters and air-defense systems.

“We have been trying to bring back some life and energy to a sad place,” said Pat Ryan, the Ulster County executive, who nevertheless praised IBM, which employed his grandfather for 36 years despite his never earning a high school degree.

Other former IBM properties in Ulster are getting a makeover, too.

This summer RBW, a 14-year-old lighting design company in Brooklyn, bought a 1980s office building for its new home. The pandemic inspired the move, said Alex Williams, an RBW co-founder who moved to his weekend house in the area after the coronavirus slammed New York. Many workers at RBW, which employed 55 prepandemic, are expected to relocate as well, though he has also been hiring locally.

A renovation will rip out wall-to-wall carpets imprinted with the shapes of chairs, Mr. Williams said, and add a tree-lined 1,200-square-foot courtyard as part of a $7 million project.

“Twenty years ago, it might have been trendy to revitalize a factory,” he said. “But I think it’s very interesting to have a blank canvas that’s a ‘Dilbert’ kind of space.”

A diverse mix is also a priority at Endicott, which sits along the Susquehanna River and was home to IBM’s first plant in 1906; it manufactured punch cards, data storage devices that were sort of prototype computers. Huron Real Estate Associates, which bought the 139-acre campus for $65 million in 2002, has lured about 20 tenants, including BAE Systems, a European defense contractor.

Arriving this summer will be iM3NY, a start-up that makes lithium-ion batteries.

The company, whose product powers electric cars, has 12 full-time employees but expects 2,000 within six years, said Paul Stratton, a senior vice president. His company is taking two buildings at IBM, including a soaring 300,000-square-foot space once used for circuit board shipping.

“There is great potential for transformation here,” Huron’s president, Christopher Pelto, said of the complex, which has a 65 percent occupancy rate.

If Mr. Pelto realizes his goal to someday have 5,000 workers on the Endicott site, up from 4,000 today, he would still fall far short of IBM’s early-1980s peak, when 15,000 employees toiled there and at a site in nearby Glendale.

But some residents say a more pressing issue is to preserve some of the dilapidated structures, regular reminders of the village’s glory days, according Marlene Yacos, who worked for IBM for 35 years before being laid off in 2004; her father worked there for 44 years himself.

“They just sit there,” said Ms. Yacos, the executive director of the Endicott History and Heritage Center. “And they have been our legacy for more than 100 years.”