Protests often erupt over proposals to demolish or even alter historic buildings. Threats to landscaping usually get far less attention.

But that’s changing in a Seattle suburb, where a developer plans to build on the corporate campus that George H. Weyerhaeuser created for his family’s timberland and wood products company beginning in the late 1960s.

The site, which the City of Federal Way annexed in 1994, has been lauded over the years for the pioneering way it intertwines building and landscape. Today, it is caught up in controversy over plans to build massive warehouses that opponents say would disrupt the balance with nature but that the property’s new owner says are necessary to pay for restoration of the headquarters building and maintenance of the grounds.

In the decades after World War II, companies left crowded cities to erect jewel-box buildings on pristine swaths of lawn all over suburbia. But Mr. Weyerhaeuser, his company’s president and chief executive, wanted its headquarters to blend in with nature rather than stand out.

The campus, designed by the architect Edward Charles Bassett and the landscape architect Peter Walker, featured a low-slung building in a meadow between wooded hillsides. Ivy-covered terraces on the front of the building cascaded down to a lake, and walking paths wound through trees. Members of the public were allowed onto the campus, which became a popular spot for kite-flying, dog-walking and birding. 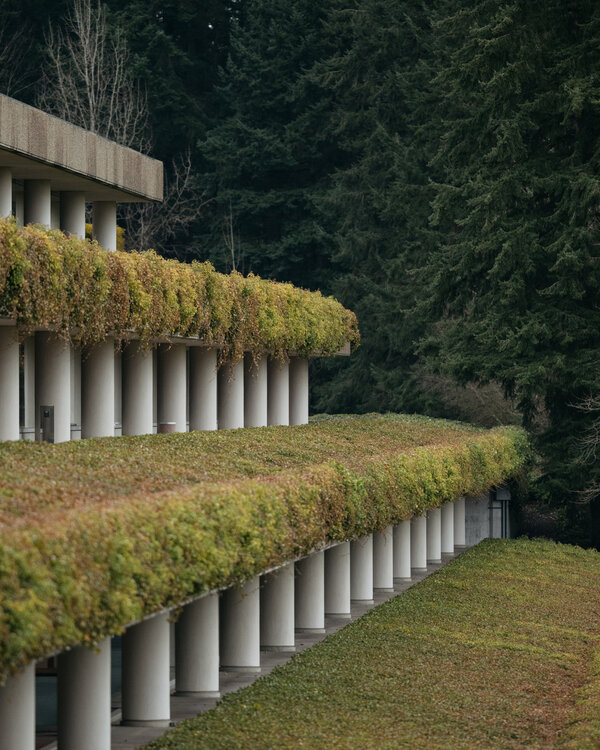 It is a time of change at postwar suburban corporate headquarters like the Weyerhaeuser campus. Before the pandemic, many properties were already being sold and in some cases reinvented for new uses, often because original owners pulled up stakes and headed back to cities — places believed to be more appealing to young, talented workers they hoped to attract. The cost of maintaining large campuses was another factor. Still, the vast majority of office space in the United States remains in suburbia.

The pandemic has not hit the office market in the suburbs as hard as it has in urban areas, said Ian Anderson, senior director of research and analysis at CBRE, a real estate services firm. But the success of remote work has called into question the need for large central offices where employees assemble every day.

Amid the upheaval, preservationists, historians and others are sounding the alarm about threats to landmark corporate campuses. And the cases raise questions about how to sensitively manage change on these sites and who is responsible for preserving them.

“How are we going to treat these as heritage sites of American design?” asked Louise A. Mozingo, chair and professor of landscape architecture and environmental planning at the University of California, Berkeley, and author of a history of suburban corporate landscapes.

The tumult has not affected all such sites. The 1956 General Motors Technical Center outside Detroit — with buildings by Eero Saarinen and landscaping by Thomas Church — remains in original hands. Ditto the 1964 campus of John Deere in Moline, Ill.

Elsewhere, sites have languished as the companies that created them went out of business or merged with others.

Bell Labs — a 1962 research facility also by designed by Saarinen on an oval campus in Holmdel, N.J. — was shuttered and headed for demolition. But former employees and others rallied to save the two-million-square-foot building. Now it is a mixed-use project that functions as the town center.

But the conversion of Bell Labs, overseen by Somerset Development, involved the sacrifice of more than 200 acres of the campus. Somerset sold the land to the homebuilder Toll Brothers, which erected townhouses and villas.

“In preservation, we gravitate to the buildings,” said Liz Waytkus, executive director of Docomomo US, which focuses on modern design. “The landscapes are harder to advocate for, even though the public has more of a connection to them.”

That was clear when PepsiCo closed the sculpture garden on its campus in Purchase, N.Y. The garden, which has artworks by Alexander Calder and Alberto Giacometti, had drawn more than 100,000 visitors annually, but it was closed in 2012 for a renovation of the 1967 buildings. After the renovation, PepsiCo did not immediately reopen the garden, citing security concerns, which prompted an outcry. The company eventually let the public back in, but on a limited basis.

The Weyerhaeuser campus, which opened in 1971, was one of the first large-scale suburban corporate headquarters on the West Coast. Over time, the company added features to the site: a rhododendron garden and a bonsai museum on the south end, a technical center on the north.

In 2016, the company moved to Seattle and sold the 425 acres for about $70 million to Industrial Realty Group, a Los Angeles-based firm that specializes in adaptive reuse projects.

Industrial Realty wants to make good on its investment. It sold off some land, renamed the campus Woodbridge Corporate Park and has been marketing the five-story headquarters building — an early example of an open-plan workplace and thus as innovative on the inside as it was on the outside — to prospective office tenants.

But Industrial Realty quickly drew opposition with a plan to build a fish plant in a wooded parcel near the headquarters. Local residents packed meetings, and eventually the deal fizzled.

Industrial Realty has secured approval for a 226,000-square-foot warehouse on the site, however. And now the company is proposing to erect another warehouse next to it and three more buildings near the technical center — plans that “would turn a historic, iconic property into an industrial zone,” said Lori Sechrist, president of the nonprofit group Save Weyerhaeuser Campus.

The advocacy group went to court to try to stop the first development, citing concerns about environmental harm, traffic and damage to the historic site. Financial contributors to Save Weyerhaeuser include Mr. Weyerhaeuser, who is no longer involved in the company.

But Dana A. Ostenson, an executive vice president at Industrial Realty, countered that the development plans were responsible. “We are interested in preserving the campus and above all creating a campus which will allow the support of the headquarters building,” he said. The new buildings, Mr. Ostenson added, would have buffers of trees.

Industrial Realty’s warehouses, which would bring jobs and tax revenue, have supporters, too, including the local chamber of commerce.

State and national organizations have joined Save Weyerhaeuser in asking Industrial Realty to minimize its footprint. The Cultural Landscape Foundation, an education and advocacy group, started a letter-writing campaign that has brought impassioned pleas. The Washington Trust for Historic Preservation has nominated the campus for the national trust’s annual list of endangered places.

Some of the buildings are proposed for wetland areas, prompting a review by the Army Corps of Engineers. And because the campus is eligible for listing on the National Register of Historic Places, preservation officials are participating in the review to help find ways to avoid or minimize “adverse effects.”

Also monitoring the process is the Puyallup Tribe, on whose ancestral lands the campus sits and whose reservation is nearby. The Puyallup have concerns about “environmental and cultural resource impacts,” said Michael Thompson, a spokesman for the tribe.

Industrial Realty is moving forward and has plans to erect the buildings on spec, Mr. Ostenson said. The company is talking to biotech and other companies about leasing, but he did not rule out having the buildings become distribution hubs.

Regardless of the ultimate uses, opponents believe that the new development would simply take too big a bite out of the storied site.

Mr. Walker, the landscape architect, designed other prominent commissions such as the 9/11 Memorial in New York. Now 88, he is among those who have urged Industrial Realty to build within the framework of an early master plan for development created for Weyerhaeuser, calling the campus “an endangered species.”