Vines crept up the house. It looked like it was about to cave in. The Colonial in Roscoe, N.Y., a hamlet of the Catskills, was decrepit — which made it all the more appealing to Bryan Sansivero, 36, and a friend, who had arrived before dawn. They entered the musty, empty dwelling, which was not really a dwelling because no one dwells there, and sat in the dark for about half an hour until sunrise.

Soon, the living room was aglow and its contents revealed: antique furnishings, a fireplace with a knickknack-lined mantel, and, most shockingly, a tiger skin rug (the creature’s mouth agape) and a hunting rifle. “We were like, this house is insane. How is this just sitting here and completely abandoned like this?” Mr. Sansivero said.

Despite the dilapidated condition, including peeling walls and an unpleasant kitchen, the house was in pretty good shape. He snapped photos and later shared them in a Facebook group dedicated to old houses, where his posts stir emotions ranging from nostalgia to sadness to skepticism that the house was actually found in that condition (Mr. Sansivero said that the houses’ belongings have typically been staged by previous visitors but that he only makes minor adjustments). 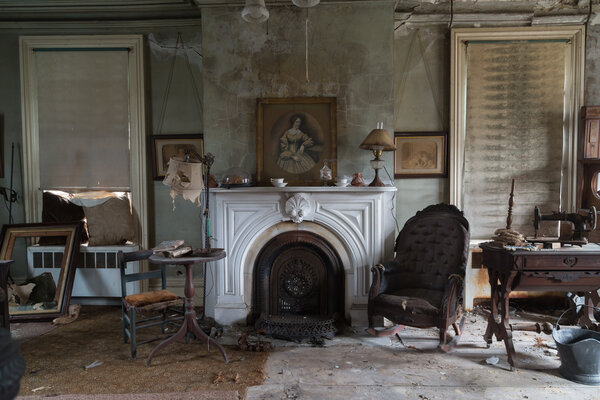 Mr. Sansivero is a professional portrait photographer by trade, but taking pictures of abandoned houses has been a passion of his since college, when he majored in filmmaking and shot a documentary short film about an abandoned hospital on Long Island. His eyes were opened to the mysterious world of such properties.

His attention shifted to houses when he visited family in Pennsylvania and took stock of how many abandoned ones there were in the rural areas. “I became fascinated,” Mr. Sansivero said. “Just going to time-capsule homes where it’s like the family just disappeared.”

He’s been to hundreds of abandoned houses, but only a few make it onto his Instagram feed. “It has to have a moody kind of light,” Mr. Sansivero said. “It has to be colorful, which I think draws in the viewer. It’s eye-catching.” And, he said, “I tend to really like unusual items that are left behind.”

Online, people are attracted to a broad range of abandoned houses. Sometimes it’s a country house standing forlornly in a field, or a mansion in Ontario where the focal point is the architectural details, or a house in Nantes, France with an Old World vibe. In the Facebook group “I Love Old Houses and Gardens,” posts dedicated to abandoned houses can draw thousands of reactions. People have long loved creepy things and even sad things, and these houses hit those notes and more.

“Sometimes when one looks at an abandoned home you get the feeling there was love in that house, that’s the feeling I get when I look at this one …” one commenter wrote about a house in Kansas. It’s not unusual to see someone point out a vintage item similar to one they grew up with or belonged to an older family member.

While exploring vacant homes is a hobby, it isn’t without risk. “Under any circumstance, if they’re on the property or in an abandoned structure or house or building, they are trespassing,” said Peter Graubard, a real estate attorney in Manhattan, said of visitors. While a house might sit empty for years on end it’s usually still owned by someone — even if that “someone” is in a different state or is a government entity.

That said, the legal risk associated with taking a look is small, Mr. Graubard said. “If it’s abandoned, then probably no one is really monitoring it. And by the time someone discovers that maybe you were on their property to take a picture, I doubt the police or authorities are going to be much interested in going after someone who just snapped a picture on social media.”

There are other risks associated with exploring these homes, though, like rickety floor boards and encountering hostile critters.

Hannah Lombard, 33, a caregiver, enjoys exploring abandoned houses in southeastern Wisconsin during her off hours. “I’ve always enjoyed anything vintage, retro, anything with character,” she said. Ms. Lombard bought a camera four years ago and started posting pictures on Instagram. She uses OnX, a hunting app that identifies property boundaries and landowner names, to try to locate the owners of vacant houses, or sometimes she’ll simply knock on the door of a neighbor. “If I can’t find out who owns the place, I don’t go in. I stay on the road and take pictures,” she said. She usually finds that the houses are vacant because someone in a different state inherited the property and doesn’t want it or can’t afford to take care of it.

“I think it’s my love of history and antiques that make it so interesting to walk through these places,” Ms. Lombard said. “You don’t see it everyday.” Some houses she’s seen are hundreds of years old. Many are empty, but she has come across items left behind such as ration cards, photo albums, and a letter dated to 1864 written in German. “We have tried to decipher it, but we cannot,” she said. Why, she and other looky-loos wonder, do possessions get left behind?

For some, abandoned houses are muses. Kyler Dannels is an architectural designer in Atlanta. As a child he would explore abandoned buildings there; many have since been turned into luxury apartments. These days, Mr. Dannels, 35, seeks out older houses throughout the United States. He appreciates their craftsmanship, which tend to have architectural details not found in newer homes. “You don’t have to go back very far where you’re dealing with rough-sawn lumber that was milled locally, and stone that was quarried from the house site you were building from,” Mr. Dannels said. “Just all of those kinds of details where the hand of whoever was involved in putting it together is much more visible and obvious.”

This exploration has influenced his work, which often involves production art and set building for movies and window displays. Sometimes this requires faux finishing and aging to make the pieces look lived in and coherent. Old houses have taught him what an antique surface really looks like. “It all has a structure and a sort of patina, tells a story,” Mr. Dannels said. If he’s making a contemporary cabin look like it was built 100 years ago, for example, he wants viewers to know that nothing is random, but rather the result of environmental factors, like, say, water running down a wall, causing discoloration.

Caught up in the hazy Instagram filters and romantic captions it might be easy to forget that abandoned houses often hold the remains of devastating personal stories. Some owners walk away from their houses without waiting for a tax foreclosure system or government entity to take the property, simply because they can’t afford to stay, said Margaret Dewar, a professor emerita of urban and regional planning at the University of Michigan. Much of her work focuses on neighborhoods in Detroit where, in September 2020, it was reported by Next City that there were 102,330 vacant housing units.

If there are scores of vacant houses in an area, it’s typically because of economic depression. In Detroit, this was spurred by a combination of blockbusting (real estate agents who use scare tactics to convince white homeowners to sell their houses then resell the houses at inflated prices to Black buyers) and the subprime mortgage crisis which resulted in the city losing 25 percent of its population from 2000 to 2010, Dr. Dewar said.

In rural areas the reason is typically a loss of industry such as a factory closure. When Dr. Dewar and her husband drive around the small Michigan town he grew up in, they’ll take stock of the places that were once homes of his childhood friends. “Now they’re fields with their equipment storage yards and things largely for agriculture,” she said. Sometimes those properties can be reused, and sometimes their highest and best use is to demolish the house to make way for a cornfield.

The preservation of rural houses is what drives Kelly Gomez, another photographer, to document them for an online project called The Forgotten South. Ms Gomez, who is 37, lives in Durham, N.C. but started documenting abandoned homes throughout the American South in 2010 when she lived in Gainesville, Fla.

Ms. Gomez heard about an abandoned property that was only 10 minutes from her own home and went to check it out. By the end of the day she had explored 18 abandoned historic sites all within a few hours of Gainesville. They felt like puzzle pieces to her and she tried to learn about what the sites once were and why they were left behind, using a map with pins to mark her finds. “I’ve seen every backwoods town you can imagine between Florida and North Carolina,” Ms. Gomez said. “I spent a lot of time exploring Georgia. So I love wandering and finding out history,”

The houses she captures range from estates like a 5,000-square-foot mansion in Madison, Ga. designed in the style of the American Aesthetic Movement in 1883 to crumbling cabins in Suwannee County, Fla. “I don’t think many people care about the history of North America and care that all these communities are disappearing,” Ms. Gomez said. Yes, she gets a thrill from seeking out these houses, but it’s also important to her that these houses’ histories are documented “so that there’s some story that people lived and existed here, maybe what they did or what they traded or what they made or what life was like for them in that region.”

As much as it might seem like these abandoned houses are left to become playgrounds for photographers, some of them do get another chance at life. In Oakland, Calif. where Redfin reports that the median home price is $950,000, there are houses sitting empty and plenty of people without housing. This prompted Dominique Walker to found Moms 4 Housing, a nonprofit which helps homeless and marginally housed mothers. The group was lauded for taking over a vacant property in West Oakland which it eventually purchased through a land trust. Similar organizations exist elsewhere n the country, like Well House in Grand Rapids, Mich. which revives vacant homes for the homeless.

Even in rural towns there are efforts to preserve decaying houses. In the town of Danville, Va., for instance, a push was made by the neighborhood organization Friends of the Old West End to prevent the demolition of the once-thriving historic district. The town had experienced economic depression after major industries shut down, with Victorian and Edwardian-style mansions left in limbo.

Friends of the Old West End partnered with the city to sell the houses at affordable prices — which mean $1 for a fixer-upper house built in 1907, or $250,000 for a move-in ready Queen Anne. “We’ve been very successful in bringing new people into those houses, with the purpose of rehabbing,” said Paul Liepe, 71, the executive director of the organization. “And in fact, those folks are signing agreements with the city that they will not only rehab, but reside in the houses for five years,” said. The goal is to prevent people from flipping their properties and instead focus on building a community.

Still, many abandoned houses will crumble or succumb to the vines. For now, they continue to capture the attention of photographers like Mr. Sansivero and Ms. Gomez who hope to preserve the time capsules, if only on Instagram’s grid. “My favorite feeling is a sense of awe or appreciation that I get for a second to stand in this place. It’s almost like a museum that doesn’t have an admission ticket and the velvet rope,” Ms. Gomez said. “I can touch the walls and I can smell the smells and imagine what it might’ve been like to stand in that house, that I think just gives a really intimate view into someone’s life. Rather than just reading a history book.”