The chef Marcus Samuelsson would not have made it through the pandemic without the help of his community.

He says the support from his family, his Harlem neighborhood and his fellow restaurant workers made getting up every day have meaning. In the process, he fell even more in love with New York City.

“Why did it have to be Covid to create this sense of community?” Mr. Samuelsson said. “But that is something I choose to see positively out of a very, very, very difficult year.”

Mr. Samuelsson, 50, lives with his wife, Maya Haile Samuelsson, a fashion model, and their 4-year-old son, Zion, in Harlem, not far from his Red Rooster restaurant. When New York City went into lockdown in March 2020 and some residents decamped to second homes, the family stayed in their brownstone.

There was enough change to deal with already. As the founder of the Marcus Samuelsson Group, with 36 restaurants from London to Bermuda, Mr. Samuelsson was weighing options on how to proceed with his teams. For Ms. Haile Samuelsson, 39, all fashion work halted. Zion could no longer go to preschool or even the nearby playground.

After the initial shock, the couple began to acknowledge their privilege. For Mr. Samuelsson, that was realizing that he had health care when so many others living around him in Harlem did not. Ms. Haile Samuelsson wondered: How can I think about fashion when other people are fighting for hospital beds? The couple heard ambulances rush by all night.

Mr. Samuelsson saw the neighborhood fall into despair at a rapid pace. That was the motivation, he said, to turn Red Rooster into a community kitchen for Central Harlem. “It gave me purpose to get up in the morning, put on a mask and gloves, walk to Red Rooster, and feed 800 people a day,” he said. “I was back to being a chef again, something I’ve been doing since I was 17 years old.”

The couple said that they wouldn’t have made it through without leaning on multiple communities. As immigrants, they arrived in the United States from simple means and felt comfortable falling back to that way of life. (Both Mr. Samuelsson and Ms. Haile Samuelsson were born in Ethiopia; he was raised in Sweden and she in Holland.) They don’t need a lot, just each other, or their “tribe,” Mr. Samuelsson said.

“It shows how strong we can be as human beings when we are pushed into something that we did not plan,” Ms. Haile Samuelsson said. “It made us closer, and to care for one another and to look to our neighbors and our neighborhood.”

Throughout the pandemic, Mr. Samuelsson relied on the newly formed Independent Restaurant Coalition, a collection of chefs and restaurateurs and lobbying group, for support. Some of his Red Rooster locations, like Miami, have reopened; others, such as his restaurant in London, will remain closed.

The chef calls his 250-person team at Red Rooster his tribe. He said he felt like a failure if he couldn’t “have their back.” Partnering with World Central Kitchen, a nonprofit organization dedicated to providing meals in the wake of disasters, to turn the restaurant into a community kitchen helped the team maintain their sanity. Since March 15, 2020, the kitchen has served more than 230,000 meals.

“Those conversations I had with our new regulars, the people in line, they became our neighbors knowing they could get food from Red Rooster,” Mr. Samuelsson said. “That gave me strength, and Maya strength, and therefore we could be better parents.” 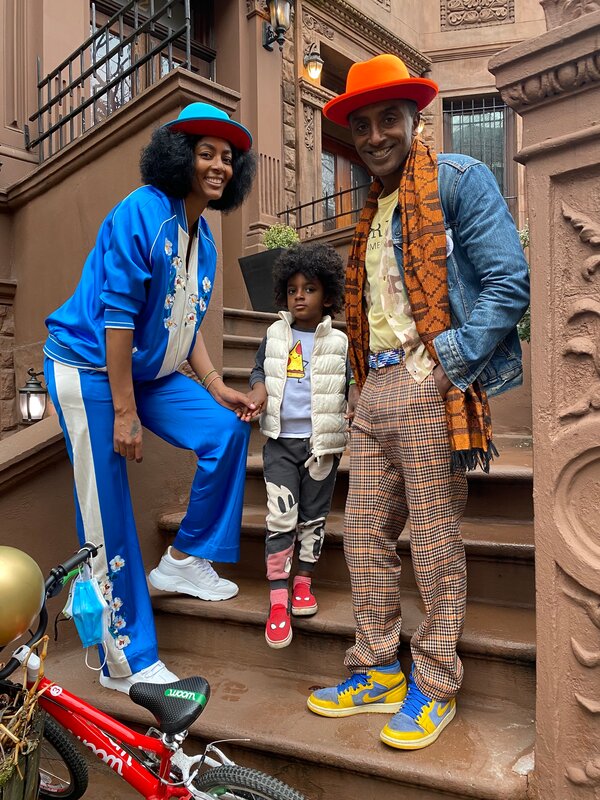 Having a sense of purpose helped Mr. Samuelsson to design a new routine for himself and his family. Gone were the long hours in a hot kitchen and travels on the road — he could be home to make dinner with Ms. Haile Samuelsson and Zion. Some of their favorite memories from the past year include Zion’s spontaneous laughter in the kitchen and his mastery at pizza toppings. Mr. Samuelsson also finished a new cookbook he co-wrote, “The Rise: Black Cooks and the Soul of American Food,” which published in October 2020.

With more time at home, Mr. Samuelsson had the opportunity to be a more involved parent. In the past year, he’s helped Zion learn to swim and ride a bicycle, two activities he isn’t sure he would have done with his previously hectic schedule. He also includes Zion in his work projects, like Zoom cooking classes and his recently started the podcast “The Moment,” which he co-hosts with the Swedish musician Jason Diakité, known by his stage name Timbuktu.

As a family, the Samuelssons participated in the Black Lives Matter protests last summer to engage Zion in the dialogue and show him that they were working toward a solution to the “biggest pandemic of racism,” Mr. Samuelsson said.

The family also regularly restocks a community fridge. Each house that participated paid about $160 to help with maintenance, and they refill it with food for anyone who needs sustenance.

[Sign up for Love Letter and always get the latest in Modern Love, weddings, and relationships in the news by email.]

Like many people, the couple yearned for social interaction and new activities to engage their son’s attention after months cooped up in the house. Luckily, the couple lives on a block that Mayor DeBlasio closed off to traffic as part of his “100 miles of streets” plan to allow more pedestrian access outside. This meant that Mr. Samuelsson’s neighbors could allow the 12 children to run around, ride bicycles down the street, and color with chalk on the pavement. Mr. Samuelsson jokingly calls it “day care” as the parents conspired to come up with “classes” to entertain the younger set. Mr. Samuelsson, of course, did a cooking demo but other parents taught art, yoga and exercise, jazz music, and even skateboarding.

In the evenings, the block’s residents would take turns offering a meal to the children and parents as a way to lend a hand. For Ms. Haile Samuelsson, it was a delightful way to get to know her neighbors, from the Jamaican woman who served jerk chicken to the family from Australia who made lasagna. She cooked an Ethiopian dish when it was her family’s night. She said she enjoyed the opportunity to talk to other women, a sort of modified girl’s night as they sat socially distanced.

“As humans, we have to talk about our emotions,” Mr. Samuelsson said. “Being able to talk to your neighbor about how you feel if you had a rough day is the reason for community. I am fortunate to be a part of my communities, be it chef, Ethiopian or Harlem. This is what 2020 gave us.”