Dara Silverman knew Erik Leibovitz for all of 15 minutes after connecting on J-Swipe in July 2015, when he asked a question that caught her off guard.

“Can you do me a favor?” said Mr. Leibovitz, 30, the vice president for global partnerships and business development at Monumental Sports & Entertainment in Washington.

Ms. Silverman, also 30 and a vice president for cybersecurity operations at J.P. Morgan Chase in Washington, braced herself.

“I thought, ‘What the heck is wrong with this guy, is he going to ask me to pick up his mail?’” she recalled. “I had no idea what he had on his mind.”

So Mr. Leibovitz, who graduated from Bates College with a degree in rhetoric, took an educated risk and asked the kind of question that could have made him yesterday’s news.

“I know you must get a lot of guys trying to take you out on dates,” he said. “Do me a favor and don’t go on any other dates until you let me take you out — give me a chance.”

Ms. Silverman said that she had fewer social options than Mr. Leibovitz could have ever possibly imagined.

“I had just finished graduate school at Florida State University, I received a master’s in public health from the University of Georgia, and moved to Washington,” Ms. Silverman said.

So she rolled with his request. 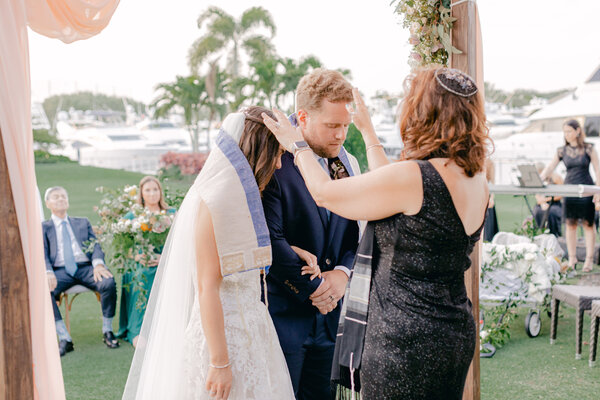 A week later, Mr. Leibovitz was hoping to make a dinner reservation at a French restaurant in Washington, Le Diplomate, which happened to be his favorite.

Unfortunately it was Bastille Day, and the restaurant had been booked. But Mr. Leibovitz would not be denied, and leaned once more on his expertise in rhetoric, and talked his way into a table for two. Ms. Silverman said they “sat there and talked for hours about life, love, work and family.”

Before the check came, Mr. Leibovitz knew he had found the woman, and soul mate, he had been looking for his entire life.

“There was absolutely no doubt that she was the one, no doubt,” he said. “She’s so smart and super-bubbly and had the greatest personality, it was easy to open up to her, and that’s why every time we spoke, it was usually for hours.”

They were married by Cantor Lisa Segal on April 24 at the Club at Admiral’s Cove in Jupiter, Fla.

They had originally intended to be married Nov. 7, 2020 in South Florida with 250 guests. But the coronavirus changed those plans.

“Looking back, I’m glad I did Erik that favor,” said the bride, laughing. “As it turned out, he was doing me a huge favor as well.”