Luis Felber and Lena Dunham are in love. The pair has made no secret of this fact on their Instagram accounts in recent months. And now they are married.

Asked when he knew he wanted to marry Ms. Dunham, Mr. Felber responded on Monday via email: “There were lots of moments, there are lots of moments and there will be lots of moments. I’m not living in a Disney film where you’re certain about who you want to spend the rest of your life with in one moment. Time is fluid and when you know, you know. I love my wife, who is also my best friend.”

So who is Luis Felber?

Born in Winchester, England, to a Peruvian mother and a British father, Mr. Felber spent his earliest years in Peru and Chile before moving back to Britain at age 7. At 17, he skipped university and began pursuing a career in music, playing guitar with several different bands.

Recently, Mr. Felber, 35, has been recording and performing under the name Attawalpa (his middle name, after the 16th-century Incan ruler Atahualpa). On Oct. 13, he’ll release a new single, “Peter Gabriel’s Dream.”

Below is an interview, edited for clarity, conducted with Mr. Felber over Zoom in early September.

So how did you and Lena meet?

It was a blind date. A mutual friend of ours basically set us up. The first time we hung out, we didn’t stop talking for, like, eight hours.

Where did you go?

Just around central London because everything was shut down. 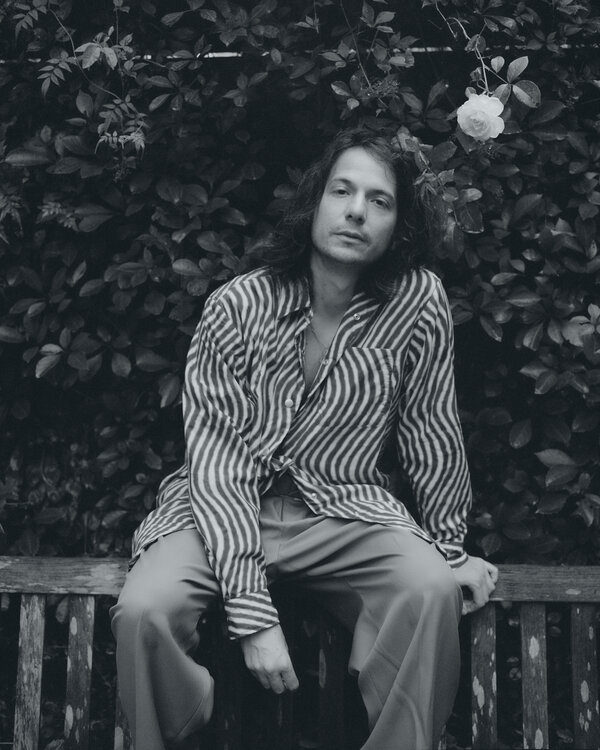 So you’re walking along the streets, along the Thames?

Yeah and I think it was sort of incredible, you know, I walked into that. I’d been on quite a few dates in the past year. As someone who’s quite open, I find you hold a lot back on your first three dates. Or first 10 dates. I was just a bit fed up with that, so I just walked into the situation very myself, shall I say. And Lena liked that. And she’s the same.

Is it fair to say that your relationship seemed to get really intense really quickly? Or is that just our impression via Instagram?

I think when you know, you know. I’ve only been alive for 35 years in this lifetime, and I think it’s another archaic thing for guys to hide their feelings. I’m way more into the flow of getting to know the person. And I think Lena’s the same, and I think — I’m going to sound cheesy — but when you find your soul mate, you just know.

She’s very open about you on Instagram. How does that make you feel?

It’s very moving. I’m still getting used to being shown that sort of love by someone else. I’ve never shut her down, or anyone down for that. It’s beautiful that she expresses herself and I love being on the other end of it.

It’s great, we’ve been living together for about four months now. We both work a lot, and every morning is a blessing. And every evening, to be able to go to bed with your best friend and chat — we find it hard to go to sleep at a decent hour. It’s rarely eight hours.

What kind of dates do you go on now?

Oh my. She comes to my gigs. Neither of us really drink, but we go for long walks on the Heath, we see friends, we watch movies, we just watched the whole of “BoJack Horseman.” I could be sitting at a bus stop with her for 10 hours and it would be the best day ever.

They love her. My mum’s very shy, and she kind of builds barriers. It’s a protection thing, I think from leaving a country when you’re very young, not knowing the language. I think maybe it’s a barrier she’s had from childhood. I can kind of relate to that. But with Lena she was just, like, best friends. She was very open about her emotions and they just love each other. My dad as well.

That’s the thing: Both me and Lena’s parents are still together, and I think that’s a great example.

I think we’ve got the same references. We were born in the same year, under a month apart, I think we have the same sense of humor. I don’t know if we’re similar. Lena would be able to answer that more.

Do you have any of your mother’s work in your home?

We’ve got a few paintings of hers. They make me feel really calm.

Lena directed the video for your song “Tucked In Tight,” a love song about your phone. What was it like working with her?

It’s the best — I love being directed by her. It’s like our relationship, it just sort of flows. We don’t have any arguments. She’s obviously very good at what she does.

Had you heard of Lena before you started dating or had you seen her work?

No. Mum was a fan of “Girls.” I remember when I was touring in my 20s, my mum and my sister were watching that show. But I never watched it.

Have you seen it now?

I haven’t. But I’ve watched her current stuff. I watched “Industry” when we first started dating, and I scored her next film, “Sharp Stick,” which is out next year. It’s a really beautiful film.

When you’re an artist, you’re living in the present, into the future. You’re looking for the next thing. Looking back is a thing we shouldn’t really do too much, to be able to move forward with ease.

But I will watch “Girls” one day, to answer your question. I can see what an impact it’s had on people. I was at lunch with some old school friends and my friend’s sister was really excited about Lena. I asked, “What did ‘Girls’ make you feel?” She said, “I feel like it gave me a voice,” and that’s amazing. What a beautiful thing to hear about your partner.

How would you describe your musical style to someone who hasn’t heard it before?

You’ve worked as a musician for much of your adult life. How did the rock ’n’ roll lifestyle suit you?

I basically toured a lot in my 20s, playing guitar for different bands. When you’re on tour, you are basically given whatever you want. Alcohol and weed were my main methods of numbing. In the U.K., alcohol is considered a normal thing to do on the weekends. But if your job entails playing every night, you are given alcohol every night. It’s almost like part of your job.

I wouldn’t say I’m sober, but I haven’t had a drink since November. I just drink when I feel like it. I call it “conscious drinking.” I never did A.A., but I started therapy in 2017. Therapists would be like, you need to stop drinking so you can hear your thoughts, and I’d be like, no. That went on for about six months. And then I did a session of five-element acupuncture, and I stopped drinking for about a year.

It’s kind of romanticized, isn’t it — musicians and alcohol.

For me, the most punk rock thing is to be conscious. Since I’ve been conscious, I’ve managed to put out loads of music and be more open to who I am.