About five years ago, Rozae Nichols, a designer in Los Angeles, decided to get out of the fashion business, in which she had worked since the 1980s. A longtime animal rights activist and vegan, she turned her attention to a new project: Flora Animalia, an urban garden where she hosts educational food workshops and crafting seminars. Out back, an assortment of flowers and vegetables flourish.

Last year, while pruning and planting in old Levi’s and a T-shirt, Ms. Nichols had the urge for a good gardening apron. “I went to look for one, and they are all too limp,” she said. “Too soft, wimpy, lightweight. Nothing sturdy.” So she set off to make her own. Hers is made from recycled denim and features thoughtfully placed pockets and a metal ring for easy access to gardening tools.

After that, when she had a hankering for a cotton dress, something “airy and peasanty feeling that was easy to throw on,” she whipped one up. Just a few years prior, the constant churn and pressure of the garment trade had worn her down; now she was feeling inspired again.

“To design within these boundaries, within this box, was appealing,” Ms. Nichols said on a recent afternoon. “I thought: ‘I’ll plan out some really durable utility clothes. What are the bare essentials?’”

In August, she released her first collection of elegant gardening clothes, also under the name Flora Animalia. The boxy, workwear-style denim jackets and vests, tapered carpenter jeans and skirtlike aprons aren’t only functional but recall the minimalist élan of Phoebe Philo-era Céline. Home Depot by way of Margaret Howell.

Ms. Nichols isn’t alone in her desire to dream up chic schmattas in which to till your brier patch. Vogue reported in January that Fiskars, the 400-year-old Finnish gardening tool brand, would be introducing gender-neutral apparel for “urban exploring.” Over the summer, Cactus Store, a popular hole in the wall in the Echo Park neighborhood of Los Angeles that specializes in succulents, released a “gardening gi” in collaboration with the jiu-jitsu lifestyle brand Shoyoroll; it has since sold out two limited-edition runs.

Last year, Dior presented a gardening-inspired collection, and among the floral embroideries and raffia sun hats were handsome work trousers, chore coats and coverall shorts in workaday gray cotton. Perfect for weeding, no?

“Because there is nothing as simple, or as complex, as nature,” Silvia Venturini Fendi wrote in an email.

“The fact is there are no cool gardening clothes, and it’s such a growing trend,” said Marika Orkamo, the vice president for marketing at Fiskars. The company, founded in 1649, has considerable experience in creating tools for gardening and other crafts. Its signature orange-handled scissors, Ms. Orkamo was quick to point out, are used by artisans at luxury houses like Chanel and Hermès. Clothing seemed a natural extension. 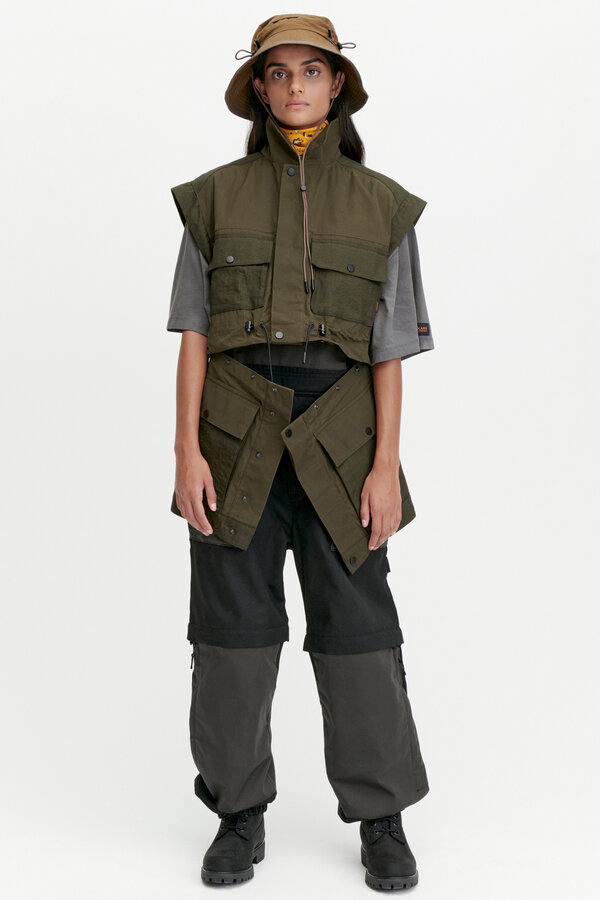 Fiskars teamed up with the textile designer Maria Korkeila on an 11-piece collection, which includes overalls, a tool belt, a coat and an apron, ranging in price from $60 to $350. It was unveiled at the Pitti Uomo men’s wear trade show in Florence, an indication of the company’s fashion ambitions.

“It was really important that you would want to wear the clothing outside the garden as well,” Ms. Orkamo said.

FASHION AND GARDENING are as intertwined as bougainvillea climbing a trellis. Yves Saint Laurent, Oscar de la Renta and Dries Van Noten are a few designers known for their green thumbs, and countless more have designed collections influenced by nature’s fecund bounty. The socialite Mona von Bismarck had Cristóbal Balenciaga design her couture gardening togs, and Katharine Hepburn famously came straight from her garden to present at the 1974 Oscars where it has been said that her outfit — loose black trousers and a matching Mao jacket — had to be spray-painted backstage to hide the mud stains.

This year gardening has taken on newfound relevance. When the novel coronavirus brought the world to a standstill, some people turned to their backyards to fill their empty hours. The unhurried, tactile act of planting and caring for greenery was, for many, a meditative rejoinder to the anxiety-inducing news cycle. And as the effects of global warming become ever more apparent, there’s some solace in the humble act of getting in touch, literally, with the earth.

According to research from the NPD Group, a retail analytics firm, customers drove a 30 percent year-over-year increase in the lawn and garden category in May and June. In late July, the ever-enterprising Martha Stewart introduced “Martha Knows Best” on HGTV, where she shows off the flora on her 153-acre New York property and answers questions from celebrities and plebeians about their nascent yard projects.

“People becoming closer to plants, by any means necessary, is our goal,” said Carlos Morera, a proprietor of Cactus Store. Mr. Morera, a longtime martial arts practitioner, sometimes goes straight from the mat to the garden, and a traditional gi tricked out with pockets for his implements seemed uniquely attuned to his needs.

“We were thinking that you hang your jacket up with all your tools in it, and it stays hung up in your garage or outside,” he said. “The fabric is so intensely durable that this thing could just live outside until you’re ready to garden”

The gardening gi has been an unexpected hit. Made from sturdy cotton (to deter cactus spines), the kimono-like top and matching pants have a combined 24 pockets and reinforcements at the knees, armpits and crotch. It cost $330 — if you were able to grab one before it sold out. John Mayer, on Instagram, called it “a lovely take on the stay-at-home uniform.”

Mr. Morera likes the subversive idea of taking a uniform made specifically for one activity — a gi for martial arts — and adapting it to another. That jiu-jitsu is an intensely physical and aggressive activity while gardening is introspective only adds to the garment’s idiosyncratic spirit.

Ms. Nichols, of Flora Animalia, likes that aprons hint at domesticity and, from a practical standpoint, are easily layered over a variety of outfits. The workwear items in her collection keep it grounded. In her mind she envisioned items that one could wear in the garden and then to the local farmer’s market without any fuss.

To help bring the collection to life, she recruited her friend, the director Matt Mahurin, to create a video look book in partnership with Mercy for Animals, an organization aimed at ending factory farming. A portion of all Flora Animalia purchases go to the group. As Ms. Nichols sees it, gardening is a way to demonstrate a more empathetic, sustainable way to participate in the food system.

Though she has been a designer for decades, Ms. Nichols sees Flora Animalia as a smaller, more focused endeavor. “I’d say it’s a distillation,” she said, gesturing to a rolling rack filled with sample garments. She spoke of the collection as gardeners do their flower bed. “I think of these as perennials,” she said. “And we’ll put some fall pieces on our website when it gets cold. I don’t want it cluttered.”