He’s a first-generation American and math whiz who went from selling T-shirts in his high school cafeteria to building a cult street wear label. He’s a creative adventurer who collaborates with Puma and rising stars like Dominic Fike and Russ. He’s a designer for Lil Nas X, Young Thug and Bad Bunny and yet never learned to sew.

Colm Dillane, the force behind the brand KidSuper, is the undisputed wild card among finalists for the prestigious LVMH prize, which. celebrates designers under 40 with more than two collections under their belts.

Reached by phone at the Brooklyn building that serves as his store, studio and hive for an assortment of creative pals, Mr. Dillane, 29, talked fashion, New York energy and the naked selfies he has a habit of posting on Instagram.

Hands down, yours is the least conventional trajectory of anyone in contention for the LVMH prize. Talk about how you went from selling T-shirts at school to being shortlisted for one of the most prestigious prizes in the industry?

At Brooklyn Tech, I sold T-shirts in the cafeteria. I made up a label called Brick Oven T-shirts, or BOTS. Brooklyn Tech was, like, a super intense place but it really made me. There’s, like, 5,000 students, and if you’re not an outgoing, hungry kid, you get lost. I have many friends that crushed it and many that got crushed by it.

Obviously, you’re one of the former.

Yeah, it was a defining part of my life.

Because I always loved being a New York kid who was brought here to make it. My parents weren’t born in America. My mom is from Spain. My dad’s from Ireland. So, when you’re not from here, there’s this constant pressure to hustle. You’re here to make the most of everything.

Your goal was not necessarily to be a fashion designer. Or was it?

I went to N.Y.U. for mathematics, but when I was a sophomore, I turned my dorm room into a store. I spray painted the walls and installed racks of clothing, and I was doing really well. Then I got found out by the dean of housing, and they made me take it all down.

At the time, I said: “You shouldn’t be busting me. You should support me! This is why this is not Harvard.” At that point, I said to myself, “I’m going to find a space or some, like, storefront where I can live in the back.” I saw hundreds of spots before I found a place on Craigslist that had a bathtub, which meant I could live there. I immediately called the guy and, without even looking at it in person, said, “I’m in.”

I’ll go out on a limb and say you probably did not have a business plan.

Ha! Yeah, the place I found is in South Williamsburg. I moved there when I was a junior, in 2013. My girlfriend and I lived in the back and split the rent. We had an opening of the store, and tons of people came, but then, when we opened for business, there was no one.

Eventually people found you, and you began to put together this creative hive.

I’d obviously seen the culture of Supreme, that energy, and I always thought that having a physical location was so cool because you can use it to build a community. I’d created this KidSuper idea that anything was possible. It was, like, a superhero name. Originally, I called it “the SuperKid,” and then a friend said, “Flip it and drop the ‘the.’’’ It was a Mark Zuckerberg moment.

Eventually I began to get known a little and did an ad campaign for Converse. I posed in these shoes and made five grand. I used that money to convert the basement of our building into a recording studio. Then, when the top two floor tenants moved out, I called all my friends and said: “Move in! This will be like Andy Warhol’s Factory.” 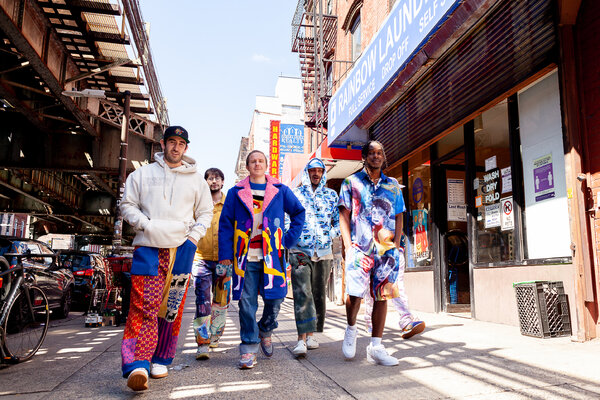 All this while you were selling KidSuper T-shirts, sweatshirts and hoodies, right?

The clothes were only part of the idea. One of my friends asked me to direct this kid’s music video, and so I did. Two years later, his debut album goes platinum. That was Russ. I did his “Cherry Hill” video that now has 10 million views.

When I was first asked to make it, I thought, “This is really cool, but how?” Videos are really expensive to make. I thought, “Maybe I could do it with a doll.” So I did it with Claymation. I took these inanimate objects and filmed them flying off into all these different worlds. For me that’s kind of the vibe of the brand.

Do you mean improvisation or treating challenges as opportunities?

That’s where the New York hustle comes in handy. I got pretty good at many things, but then you never love the guy who’s good at everything but a master of nothing, so I decided to focus more on the clothes. When I had my first show at Paris Fashion Week, I felt like we don’t really belong here, but anyway we’re going to make a splash.

That was the aptly titled “Bull in a China Shop” show.

Even the idea of being in Paris Fashion Week seemed insane. It all seemed like such an exclusive world to me. By 2018, I had done one show around the time of New York Fashion Week, a very small show with just seven looks at Soho House. Joey Badass performed, which was supercool.

Then one day at the store, a stylist came in, and we were talking about Paris Fashion Week, and her friend that was with her was, like: “Oh, you know, my boss helps people put on fashion shows. Would you like to speak to him?”

Was that Florent Belda, a publicist who worked for Prada and Helmut Lang, among many others?

Yeah, I was really just joking. But we had a meeting with Florent, and suddenly we were talking venues and were in deep and on the Paris calendar. That was in 2019.

It was crazy. The way I see it, there are not so many times in life that you’re going to get the opportunity to take these crazy steps, so I used all the money I had in the world to put on that first show.

And cast your parents in it.

I put my mom and dad in it. I wanted all my friends to walk.

From that point on, the way forward in fashion seemed a lot clearer.

What I love the most is the fact that KidSuper can put on a show at the same time as Chanel or Louis Vuitton. There aren’t many fields where you can be on the same calendar as the best in the world.

And then came the show “Everything’s Fake Until It’s Real,” which was the proverbial game changer.

Yeah, we were on the 2020 calendar, and then came lockdown. For me it was an opportunity. It’s not like we could just rent a castle in Paris or something for our third show. So, in a weird way, going virtual was an opportunity. We did a complete runway show in Claymation, with tiny figures based on heroes of mine like Pelé, 50 Cent, Stephen Hawking, Jackie Chan, Naomi Campbell, Salvador Dalí. With the video, people could suddenly see, like, “Wow, Colm can make a whole runway show with these little dolls, and it’s actually a better idea.”

I always had a clear ethos that I wanted to keep working with a larger creative community. My main goal all along has been to do the most outlandish things and flex the most creativity.

You flex more than creativity on social media … ahem.

You mean, the me-taking-my-clothes-off thing? I’ve always been a naked wild type of person. I mean, it’s not an OnlyFans situation. It’s just part of my New York grind that you can’t box me in.

This interview has been edited for length and clarity.