Jerimy L’Bene’ Craft and Courtney Marie Broussard never imagined that the coronavirus would be the least of their worries when it came to their Feb. 14, 2021 wedding. Little did they know that a winter storm was about to put a deep freeze on their Valentine’s Day wedding.

They initially planned to get married about 30 miles from Houston, with 150 guests, at Meekermark in Magnolia, Texas.

But because of the pandemic, they soon narrowed the list from 150 to 50, inviting the other 100 guests to join virtually. They wanted to avoid rescheduling because, Ms. Broussard said, “Jerimy and I wanted to honor our date of Valentine’s Day.”

Enter the winter storm that ravaged a large part of the country, particularly Texas.

Sunday morning, Ms. Broussard became inundated with concerned calls while at their hotel room at the Residence Inn Market Street in the Woodlands, Texas, which was about 35 minutes from the venue. Initially, the storm was predicted to hit well after their wedding, but was accelerating. “The forecast was now showing we would receive freezing ice during the same time our guests and vendors would be traveling to the venue,” Ms. Broussard said.

They decided they would just get married in their hotel room.

Pastor Jerry Holt of Hicks Tabernacle Missionary Baptist Church in Nashville, Tenn., had already traveled to them and was in another Woodlands hotel nearby. Pastor Holt, who works with Mr. Craft and is his mentor, said he was more than happy to still perform the ceremony. They reached out to their coordinator, Tamarah Smith of Tammy’s Table, with the news. And then a quick transformation began with the help of their wedding vendors. 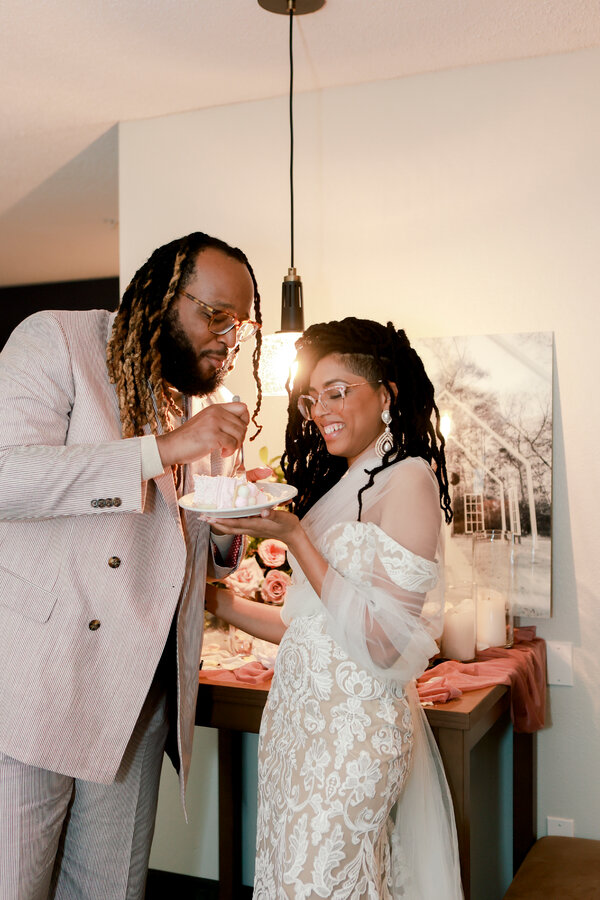 Their florist filled their hotel suite with flowers. Their caterer delivered meals to their room and donated the remaining meals to a warming center in Houston at the couple’s request. Ms. Broussard’s maid of honor arrived with a makeup artist. And their original venue sent their photographers to shoot the wedding.

Mr. Craft and Ms. Broussard ultimately married with only 10 family members, which included Ms. Broussard’s mother, son and maid of honor and Mr. Craft’s brother and his brother’s girlfriend.

Mr. Craft said they are “grateful to have literally weathered a storm to become husband and wife.”

Mr. Craft, 37, grew up in Mississippi. He is a coaching manager at Asurion, a company that provides insurance for consumer electronics, where he oversees the staff training programs.

Ms. Broussard, 34, is a native Houstonian and a graduate of Sam Houston State University. She also has a post-baccalaureate certificate from Lone Star College. She is currently working on her master’s in management information systems at Lamar University and works remotely from the couple’s home in Katy, Texas as a math intervention specialist for a virtual public school.

The couple met in 2014 at a dive bar in Houston called the Flat. “A pretty woman is sitting next to me, an obscure song comes on, and we are the only two people who seem to know it,” Mr. Craft said of Jesse Boykins III’s “Amorous.” That led them to chat, which led Ms. Broussard to follow Mr. Craft on Instagram.

Ms. Broussard was on a date that night with another man, who happened to be a childhood acquaintance of Mr. Craft, as fate would have it.

The instigator was an Instagram post. “Jerimy posted a picture of shrimp and grits. It looked so delicious that I had to ask him about the restaurant,” Ms. Broussard said. He messaged her back with the name of the restaurant. “And did her one better. I invited her to it too,” Mr. Craft said.

Their first date was Sept. 30, 2017 at the Backstreet Cafe. After that, “We would meet monthly to enjoy brunch at various local restaurants,” Mr. Craft said, referring to them as “brunch buddies.”

But in June 2018, their relationship shifted. Mr. Craft invited Ms. Broussard to join him on a trip to New Orleans to witness his best friend’s white coat ceremony honoring his medical school graduation. She said yes.

A month later, Mr. Craft knew Ms. Broussard was the one. They were at Postino Heights, an Italian restaurant in Houston. “I still remember being on the patio when the conversation turned to what she wants and what she would need from a partner,” said Mr. Craft. “My thoughts interrupted her words. All I could hear was, ‘She is talking about you.’” For Ms. Broussard, seeing Mr. Craft with his family, as well as with her son from a previous relationship, solidified her feelings for him.

Mr. Craft proposed on Dec. 21, 2019, his parents’ wedding anniversary. “I always wanted to honor that, even after my mother passed,” Mr. Craft said. They had drinks where they met; dinner where they had their first date; and a bottle of wine at the place he realized she was who he wanted to marry. At the end of the date, he proposed in a hotel room, which Mr. Craft’s brother and best friend decorated for them.