PARIS — When the designer Alber Elbaz, who died from Covid-19 last spring, left his longtime job as creative director of Lanvin in 2015, he didn’t just jump straight into another brand. Instead he took time to explore other industries, meet new people and think about what it was that would make him really happy. He had a lot of ideas.

One of them became AZ Factory, the new venture that merged fashion, technology and entertainment, which he introduced with the backing of Compagnie Financière Richemont in January, just a few months before he passed away in April.

And another, one he never realized but always dreamed of, was to create what he sometimes referred to as a traveling theater of fashion, or a circus of fashion, inspired by the French théâtre de la mode, a touring exhibition of mini-mannequins in couture meant to promote the industry in the post-World War II period. Only he didn’t want to make his version doll-size; he wanted to enlist a cohort of his designer peers to create “love, beauty and hope” (in the words of his partner of 28 years, Alex Koo) by bringing their vocation to the world for anyone, and everyone, to enjoy.

Designer peers working together in the interests of love and hope? People patted him on the back and wished him luck.

But on Tuesday night in Paris, on the final night of fashion month, only five months after the news of his death rocked the industry, it happened.

Forty-five designers from around the world were brought together at the invitation of Mr. Koo to each make a single outfit in Mr. Elbaz’s memory, inspired by their relationship with the designer or their memories of him. Together with a collection from his final design team, the work made a fashion show, held in front of his real family, flown in from Israel, and his fashion family. Not as a memorial, but as a celebration.

Rick Owens was there, talking to Jean Paul Gaultier. So was Daniel Roseberry of Schiaparelli and Maria Grazia Chiuri of Dior. Antoine Arnault and Sidney Toledano of LVMH Moët Hennessy Louis Vuitton were sitting with Philippe Fortunato of Richemont (who helped realize the night), François-Henri Pinault of Kering and Diego Della Valle of Tod’s. Demi Moore and her daughter, Scout Willis, were close by. So was Brigitte Macron, the first lady of France. 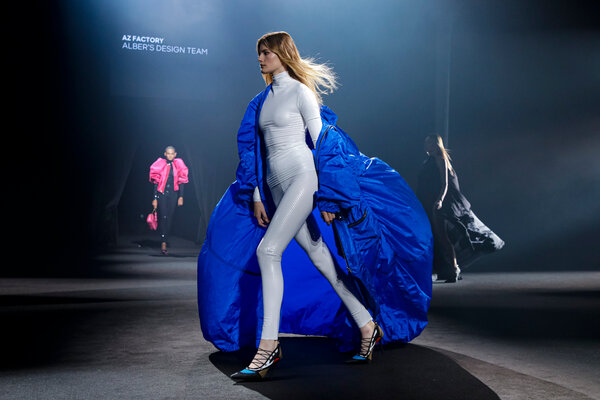 Around them waiters circulated with Champagne and multicolored éclairs, because Mr. Elbaz believed in food and hospitality (even though he fretted about his weight). The entrance to the event was papered with some of his favorite sayings. “When nothing goes right, go left” being quintessential.

If his words were on the walls, however, his image was stamped on the clothes.

Sometimes literally so, as in the case of Dries Van Noten, who made a crimson coat out of a techno material developed with Mr. Elbaz’s AZ Factory collaborators, and Olivier Rousteing of Balmain, who made a white satin mini dress with big crystal-studded sleeves: both incorporated the caricatures Mr. Elbaz used to draw of himself on notes and invitations.

But sometimes the connection was more abstract.

There was a lot of hot pink, Mr. Elbaz’s signature color, as in the ruffled silk float from Pierpaolo Piccioli of Valentino, the giant nylon taffeta-bowed bubble from Demna Gvasalia of Balenciaga and the leather bubble from Nicolas Ghesquière of Louis Vuitton. Big, boa-constrictor ruffles, like the tulle frills that Tomo Koizumi snaked around his little black dress. Funny Charlie Chaplin suits and bow ties, which were Mr. Elbaz’s uniform, interpreted by Ralph Lauren (who also made a Teddy Bear sweater, because Mr. Elbaz was famously cuddly) and deconstructed into a dress by Rosie Assoulin, the New York designer who had once been Mr. Elbaz’s intern.

And there were hearts, because Mr. Elbaz signed everything with a heart, as in the pajama suit from Guram Gvasalia of Vetements. Ms. Chiuri embroidered “I love you” in script on her ball gown.

It was a reminder that Mr. Elbaz had that often-rare thing in fashion: a personal and identifiable design signature and such a fertile body of work it would live on as creative fodder for others (rumor has it the dresses may become part of a touring exhibition, as Mr. Elbaz hoped). But also that his work was not the only impact he had.

The title of the evening was “Love Brings Love,” which was pretty much Mr. Elbaz’s motto in life. He believed that if he saw the good in other people, they would prove equal to the expectation.

For that evening, in Paris, the fashion world wiped away the stereotype of itself as a competitive, elitist industry, and proved him right. If that isn’t so much a moment as a recalibration, his dream really will have come true.