SYDNEY — Ralph Lauren is moving closer to his own Grand Slam.

WWD can reveal that on Monday afternoon, the Australian Open and Ralph Lauren Corp. are due to announce the brand as the event’s new Official Outfitter.

The deal makes Ralph Lauren the official outfitter of three of the tennis world’s four Grand Slam tournaments, following longstanding partnerships with the U.S. Open and Wimbledon, which commenced in 2005 and 2006, respectively.

Under a new global long-term partnership that will commence with the 2021 Australian Open — which will take place from Jan. 18 to 31 at Melbourne Park with at least 25 percent crowd capacity, according to Tennis Australia — Ralph Lauren will dress all on-court officials, including chair umpires, linesmen, lineswomen and ball boys and girls in a specially-designed collection of apparel and accessories.

All off-court staff and Australian Open executives will also be outfitted in the Ralph Lauren uniforms.

With the event taking place in the middle of the often scorching Australian summer — temperatures in Melbourne reached 110 degrees Fahrenheit last January — the collection was designed with the country’s climate in mind.

All on-court staff will wear long-sleeve polo shirts that have been specially designed as an activewear piece, featuring both UV protection and wicking properties. For the ball boys and girls, sun hats with neck coverage have been supplied.

First Ladies Fashion Through The Years

In line with Ralph Lauren’s sustainability goals, the fabric used in the uniform’s Polo shirt, short, skort and cap will be made from yarn derived from recycled plastic bottles. 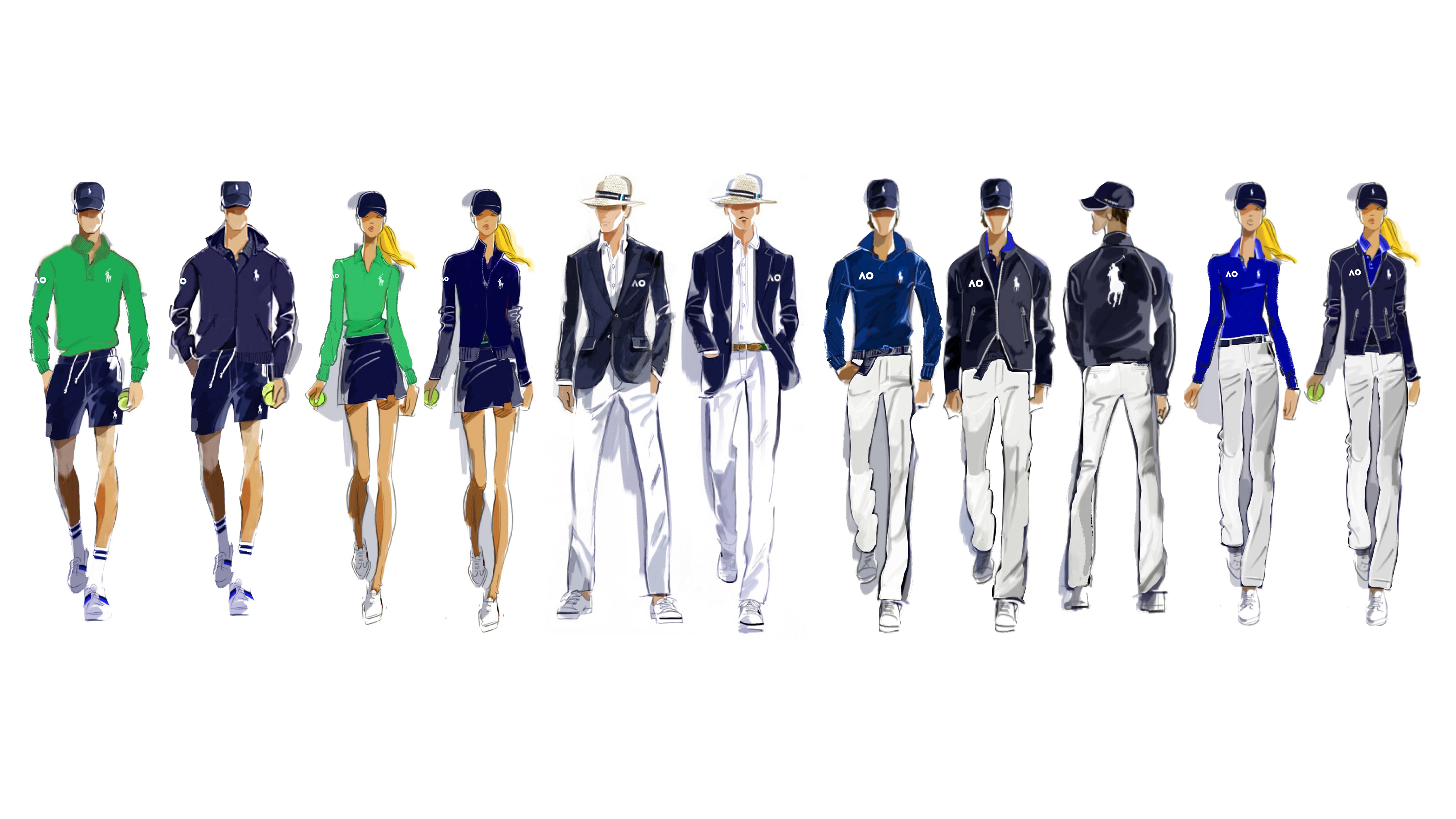 “We’re thrilled to be a partner of the tournament,” Ralph Lauren vice chairman and chief innovation and branding officer David Lauren told WWD.

“Each tournament has its own individual personality — Wimbledon is traditional and elegant and the U.S. Open draws on the electric energy of New York. The AO is often referred to as the ‘Happy Slam’ and is held in the peak of Australian summer,” he added. “For our inaugural year, we wanted to create a look that was comprised of our most iconic pieces — like the Polo Shirt for the ball kids and a classic navy blazer for the umpires — done in a bright color palette to reflect the fun and modern spirit of this Australian tournament.”

According to a company spokesperson, although there are plans for the co-branded Polo Ralph Lauren x Australian Open collection to eventually be sold in Ralph Lauren stores in Australia and internationally, as is the case with the company’s Wimbledon and U.S. Open collections, the line won’t be available in store in 2021.

Polo Ralph Lauren will operate an on-site pop-up store at Melbourne Park for the duration of the 2021 tournament offering its Create-Your-Own program for the first time in Australia, alongside a customization service for the personalization of its standard Polo shirts, pullovers and totes with names and initials.

The company has more than 360 points of distribution in Australia, with more Ralph Lauren stores in the pipeline, according to Lauren.

“As part of Ralph Lauren’s Next Great Chapter strategy, we are prioritizing targeted expansion in key markets across Southeast Asia and specifically in Australia, where we see a lot of opportunity,” he said.

Founded in 1905 as the Australasian Championships, the Australian Open will celebrate its 109th edition in 2021. The largest of the four Grand Slam tennis tournaments, the event was attended by 812,000-plus people in 2020 and aired live across more than 215 territories on more than 52 television channels this year to reach 900 million-plus homes daily.

“We are delighted to welcome Ralph Lauren to the Australian Open family and proud to partner with this prestigious global brand who have a role in some of the world’s biggest sporting events,” said Australian Open tournament director Craig Tiley.

“The Ralph Lauren style and sophistication will bring a fresh new look to the Australian Open and the uniform designs reflect the contemporary, playful and premium AO brand. Our shared commitment to excellence, innovation and creativity, along with a deep connection to history and tradition, form the base of this exciting new long-term partnership.”