Hauling sail into 2021 like “soon may the Wellerman come …” 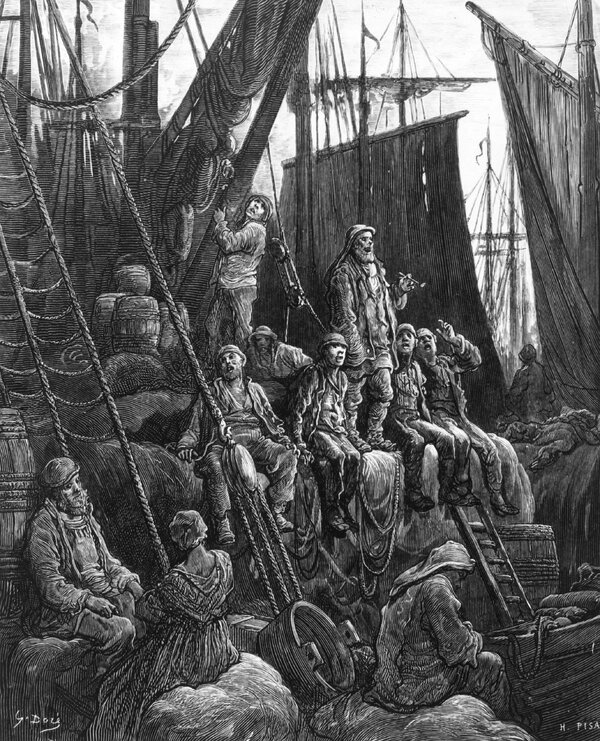 In the final week of 2020, Nathan Evans, a 26-year-old Scottish postman and aspiring musician, shared a video of himself on TikTok, singing a sea shanty called “Soon May the Wellerman Come.” He wasn’t expecting anything to happen, but the app has a way of turning dusty esoterica into viral gold.

Indeed, over the last two weeks, his old-timey video has been shared and duetted thousands of times: by professional vocalists and instrumentalists, maritime enthusiasts, electronic beatmakers, memers, a Kermit the Frog puppet, and more.

“If it wasn’t for TikTok, I would be so bored and claustrophobic,” Mr. Evans said via Zoom. “But it can give you a sense of having a group. You can collaborate with other people and make friends so easily.”

What Is a Sea Shanty?

One of the original purposes of the sea shanty was to create a sense of community and shared purpose. On merchant marine vessels in the 1700s and 1800s, a shantyman would lead sailors in song as they worked, distracting them from their toil, enlivening their tasks and establishing a rhythm.

“The different kinds of onboard work and chores would have different shanties attached to them,” said Gerry Smyth, a professor of Irish cultural history at Liverpool John Moores University and the author of “Sailor Song: The Shanties and Ballads of the High Seas.”

According to Mr. Smyth’s research, shanties evolved to match and expedite particular tasks. “If you were hauling sail, for example, the shanty was designed around the physical effort required to achieve that,” he said. “Everybody would pull at the same time,” he added, cued by the rhythm of the song.

The earliest sea shanties could be as old as seafaring itself. They tap into the story-sharing impulse of oral literature, which is even older still.

Singing is fun, and it lifted the sailors’ spirits, Mr. Smyth said. The songs also offered a common language for multinational crews.

“This communitarian aesthetic, it really does go back to a very ancient time,” Mr. Smyth said. “When we’re sitting around the campfire, we’re talking about the hunt. We achieve identity through community, through the underlying beat on the drum.” In these ancient storytelling traditions, everyone knew the tale and played a part in telling it.

Other working songs have run on the same shared storytelling impulse. This is especially apparent in the call-and-response tradition of African-American folk songs and spirituals, which drew on the democratic participation practices of sub-Saharan public life.

For sea shanties, the passage of time has led to some revision. In the Victorian and Edwardian eras, scholars collecting sea shanties cleaned up the lyrics, a great deal of which were quite “bawdy,” Mr. Smyth said. These collectors bowdlerized the songs, replacing “whores” with “fair maidens,” removing coarse language and toning down drunken nights at the pub.

In the versions that remained truest to the sailors’ lives and language, these ballads focused on what Mr. Smyth calls “the fundamental coordinates of the shanty imagination”: arriving in port and returning to the sea. Out in the vast blue, they found a romanticized life of toil and violence. Back on dry land, their yarns starred pimps, prostitutes and inebriated seamen losing their wages at the bar and in back-alley dice games.

The recently popularized “Soon May the Wellerman Come” — which the band the Longest Johns covered in 2018 — leaves out such naughty narratives in favor of a “Moby-Dick”-like whaling adventure. Its subject was real: the Weller brothers’ whaling company owned an outpost in Otago, New Zealand. The song lyrics feature sailors harpooning a whale and hoisting it to the ship for butchery.

“This well could have been a cutting-in shanty,” or a song that men sung while they slaughtered a whale, said Michael P. Dyer, the maritime curator at the New Bedford Whaling Museum in Massachusetts.

That particular task was messy; the harvesting of whale parts — oil to light lamps and use in cosmetics, baleen for whalebone corsets, tongue for food — was hard labor. The “tonguing” that is mentioned in lyrics refers to removing the tongue, the most edible part of the whale, according to Mr. Dyer.

As for the line “to bring us sugar and tea and rum,” some believe that it may refer to whaling’s part in the triangle slave trade of the Atlantic. (Accordingly, various commenters suggested that the meme had lost its charm.) Others believe the phrase refers to another ship coming to resupply the whalers on their long hunt.

“‘Wellerman’ is not really a shanty,” said David Coffin, a folk musician and music educator in Cambridge, Mass. It’s a whaling song with the beat of a shanty, he said, but its purpose is that of a ballad — to tell a story, not to help sailors keep time.

In any case, the form, Mr. Smyth said, is malleable, which could explain the thousands of riffs, duets and adaptations that have proliferated online. Some people have even begun covering popular songs — like “All Star,” by Smash Mouth — in a sea-shanty cadence.

“It’s not the beauty of the song that gets people,” Mr. Coffin said. “It’s the energy.”

“That’s one of the things I love about sea shanties,” he added. “The accessibility. You don’t have to be a trained singer to sing on it. You’re not supposed to sing pretty.”