Almost exactly a year ago, the Louis Vuitton show, held in the courtyard of the Louvre, brought the curtain down on the runway circus as it once was.

Though no one knew it at the time, it was the last mass live fashion event that would take place; by the time attendees had returned to their home countries, coronavirus-induced quarantines and lockdowns had begun, and fashion, like much of the rest of the world, seemed to go on pause.

Twelve months later and Vuitton was back in the Louvre, again bringing the season, weird and digital though it was, to an end — without an audience or even a catwalk, but with a point. Turns out that while sitting at home, the designer Nicolas Ghesquière had actually been on an odyssey — of the mind, anyway.

The result was a raucous whip-stop tour of Greek and Roman mythology (via a collaboration with Fornasetti), gladiator armor, couture curves and 1960s Jolie Madame dresses; ruffled crinolines and retrofuturism; one female historical archetype mashed up against another and spliced with the trappings of conquest. A black sack dress came with a crystal mosaic plastron, a Michelangelo-print parka lined in crumpled gold atop tutu frills. There were gladiator snow boots.

We may not be able to travel physically, but fashion can still take us all sorts of places we never thought we’d go. That’s an enormous vicarious pleasure, now more than ever.

So, at Schiaparelli, Daniel Roseberry went out on a limb, offering up an iteration of the gold breast-shaped breast — plate? shield? — that first appeared in his couture show, stitching it into jackets, adding it to knits and throwing in a gilded corset alongside, complete with belly button.

At Dior, Maria Grazia Chiuri went through the social media looking glass into the very dark world of fairy tales — the ones written to alert children that the world can be dangerous place, not the ones with happy endings — and from there to the Hall of Mirrors in Versailles. Though her hall wasn’t exactly the Hall of Louis XIV.

Instead, the artist Silvia Giambrone had blanked out the reflective surfaces with wax and peppered them with thorns. And instead of wearing ball gowns and mooning after a prince, Ms. Chiuri’s women were altogether darker in mien: schoolgirls in twisted uniforms of white shirts, leather pinafores and gray tailoring; Red Riding Hoods gone rogue in rigorous, Bar-inflected suiting and rockabilly leopard; the corrupted innocence of tulle. She called the show “Disturbing Beauty,” and it was. 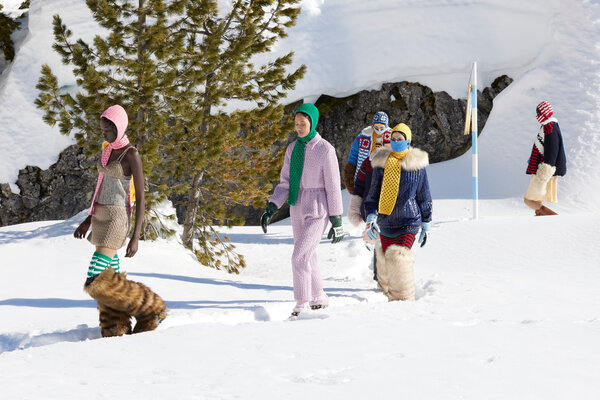 And at Miu Miu, Miuccia Prada set off for the high, high reaches of the Dolomites, deep in snow, to explore a vast wilderness — not just the one speckled by fir trees, but the one that stretches between the poles of home and away; the inside and the outside.

Her elements were wispy slithers of delicate slip dresses and camisoles; duvet-quilted pants and coats in sugar-sweet pastels; cavernous cargo pants and a plethora of striped knit beanies, scarves and tights, plus furry mittens and boots that could reach past the knees, all layered up like a baked alaska and just as impossible to resist.

On a Zoom call after the show, Mrs. Prada noted that what most people probably don’t know about her is that she loved the mountains — and sometimes, when it was warm, she used to ski in a bikini.

Just sit with that image for a moment and enjoy the art of the possible.

Speaking of skiwear, it made an appearance, too, at Virginie Viard’s Chanel show. (The outdoor rec world is having a major renaissance, and the puffer is the piece of the season.) Here it bumped up against the lacy bodysuits and sheer chiffons of the Parisienne coquet in the narrow halls and spirally staircase of Castel, the famous French nightclub.

The evening started promisingly enough, with classic bouclé bandeaus and skirts just barely veiled with a sheer overlay and paired with furry snow boots, but then veered off in startling directions: quilted logo-festooned bib overalls, lurid logo miniskirts with fuzzy faux fur-effect vests; and tinselly black skirts with transparent twin sets composed of a shirt with a trompe l’oeil tie and cardigan. For every cool little black party dress, there was a Chanel No. 5 red sweater, crystal garter belt and pair of pearl suspenders. It was a little “Desperately Seeking Susan,” the luxury version, and hard to figure out where exactly it was going.

At Balmain, by contrast, it was pretty clear: up and away.

Filmed in an empty airport, with models literally strutting the wings of an Air France jumbo jet, the tarmac and a hangar, it showcased a fleet of olive green greatcoats and shearling aviator jackets, ruched parachute silks and the intricately laced minidresses for which Olivier Rousteing is known. Also scrunchy Mylar-like silver and the neon orange and yellow of ramp personnel.

The last few months, Mr. Rousteing said on a Zoom call, had made him realize that, as much as any garment, “travel is a luxury.” (True: We always want what we can’t have.) That led to, ironically, his most grounded collection yet, freed from a lot of the overblown excess and MTV absurdity that has weighed down his work in the past. You just had to dodge the occasional shooting shoulder pads and ’80s effects.

At the end, the models walked a VR runway in the shadow of a faraway planet. “I can’t have a fashion show on the moon, but maybe, one day,” Mr. Rousteing said. (From his mouth to Elon Musk’s ear.)

In the meantime, you can dress for it. That’s the power of fashion, and its promise.