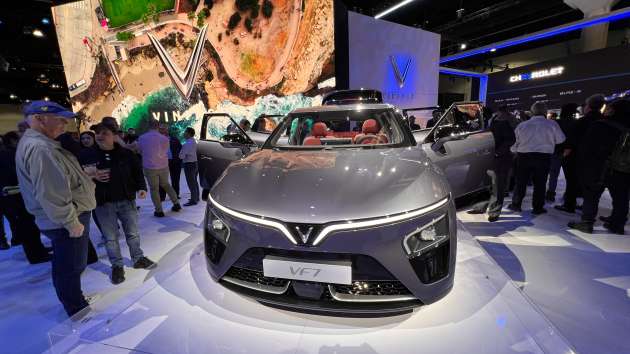 In January this year, VinFast presented three new electric vehicles at the Consumer Electronics Show (CES), namely the VF5, VF6 and VF7. All three were joined by the VF8 and VF9 that have since gone on sale in the United States, with prices starting from USD54,990 (RM241,901) with a battery subscription, or from USD64,990 (RM285,826) with no subscription.

It should be noted that at the time, the VF5, VF6 and VF7 were not introduced as production-ready models, but that has somewhat changed at the 2022 Los Angeles Auto Show. At the event, the Vietnamese carmaker unveiled the exterior and interior details of two of its upcoming electric SUVs – the VF6 and VF7 – designed by Torino Design.

The styling features cues that are synonymous with the brand, including a full-width light bar that “cradles” the VinFast logo. Unlike its larger siblings, the main headlamps are placed further down at the sides of the bumper in a surround that also accommodates air curtains and the fog lamps.

Meanwhile, the lower apron has trim pieces that divert upwards to create a visual link to the light bar. The creased bonnet, distinct side mirrors and rising belt line contribute to a dynamic exterior, as do the C-pillars with a pinched section highlighted in gloss black.

Equally as distinctive is the rear of the VF7, which replicates the front end by its ultra-slim taillight bar and upturned trim, with both framing the triangular-shaped cutouts and recessed number plate holder.

Inside, you’ll find an infotainment screen angled towards the driver, along with the air vents and a row of buttons that act as gear selectors. The driver-oriented cockpit does not come with a conventional instrument cluster, with driving information being displayed on the big touchscreen or projected by a head-up display. Elsewhere, the centre console houses a wireless charger, a media control dial, cupholders, USB ports, an arm rest and a small stowage cubby.

As for the B-segment VF6, it will also come in Eco and Plus versions, the latter with the same outputs as the VF7 in its base FWD form. However, the VF6 Eco, which is also FWD, has a less powerful electric motor that serves up 177 PS (174 hp or 130 kW) and 250 Nm. VinFast did not disclose battery details in its release, but it did say the VF6 and VF7 are covered by a 10-year vehicle warranty and a 10-year, unlimited-mileage warranty for the EV battery.

The VF6’s interior is very similar to the VF7, incorporating the same driver-focused cockpit, but with a centre console that is shorter and doesn’t meet with the base of the dashboard. The compact SUV is also less dynamic in its styling, with a more subdued front end that retains the signature light bar and lower-mounted headlamps.

You’ll also note the simpler bottom intake and less prominent bonnet creases, while the sides miss out on the VF7’s flush door handles and swanky C-pillars. It’s much the same story at the rear, which bears full-width taillights and a multi-layered design that culminates in a large black panel. In terms of dimensions, the VF6 measures 4,238 mm long, 1,820 mm wide, 1,594 mm tall and its wheelbase spans 2,730 mm.

Like the VF8 and VF9, both the VF6 and VF7 will be offered with the full cost of the battery included, or with a subscription for battery use that lowers the retail price. Expect the new offerings to be cheaper than their larger offerings, and with all four in the line-up, VinFast will cover the B to E segments.