Lewis Hamilton has done his time and will not be handed any further penalty for the on-track incident between the seven-time Formula 1 champion and current points leader Max Verstappen at the Formula 1 British Grand Prix.

Formula 1 stewards on Thursday turned down Red Bull Racing’s plea to revisit the incident and the 10-second penalty handed to Hamilton following on-track contact between Hamilton and Verstappen at the F1 British Grand Prix. Contact between the two cars sent Verstappen careening off the track, into a barrier, and out of the race.

Hamilton overcame the 10-second penalty and went on to win the race and cut Verstappen’s lead in the championship from 33 points down to just eight.

Teams were allowed three representatives in the conference. Neither driver nor Mercedes team principal Toto Wolff were in attendance. F1 race director Michael Masi was also in attendance. 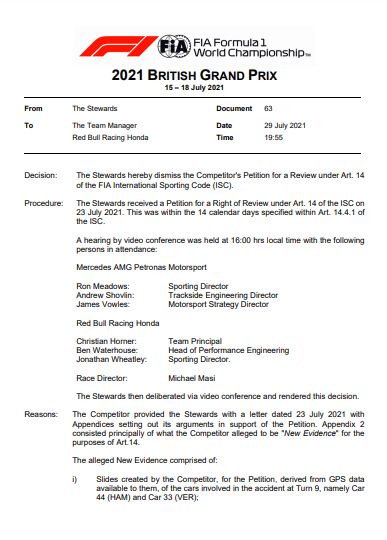 According to the official FIA report that explained its reasons for dismissing the Petition for Review, Red Bull’s presentation included “slides” created by the team of a re-enactment of Hamilton’s lap based on a lap “allegedly driven by another driver (former Red Bull F1 driver Alexander Albon).”

Lap simulations and GPS data for both Hamilton’s and Verstappen’s cars were also part of the Red Bull presentation.

To continue with the full Petition for Review, which could have led to more penalties assessed to Hamilton, Red Bull was obligated to provide evidence that stewards believed was:

• Discovered as opposed to created

• Unavailable to the Competitor at the time of the original decison

In the end, the stewards’ report concluded “that what was presented to the stewards was not a significant and relevant new element (that was) discovered which was unavailable to the parties seeking the review at the time of the decision concerned.”

Stewards rendered their decision not to reopen the case following the video conference involving both teams. And, “the petition having been dismissed, the stewards make no comments on those allegations.”

What do you think? Was a 10-second penalty enough for Lewis Hamilton? Was it just a racing incident and Red Bull should just walk away and get back to work?