The fuel efficiency on the MID delighted me by reaching a top figure of 21.6 km/l.

BHPian RavenAvi recently shared this with other enthusiasts.

The final ordered part, the switch for the power-folding ORVMs, reached the dealership city on Friday, 08th July. I drove over on Saturday morning to get the fitments done and to avail the 1st Free Service. It was dark, damp and wet all around. Our city was being pounded by continuous rains from the night before.

Thoroughly enjoyed the drive to the Paramount service centre. With the rains, dark atmosphere and minimal traffic in the day, once the showers lightened up, I was able to stretch Icarus’s legs to unmentionable speeds before sanity prevailed and I came back to legal speeds. I am happy to report that even at that unmentionable speed, the mHawk didn’t feel strained at all and was actually asking for more!

It’s tough to keep your sanity and your boyishness under control when driving this 182PS driver’s delight. My face was plastered with silly grins throughout the drive.

Yes, this iteration of the mHawk is actually a sipper! Reached the dealership at 12 noon. Heavy rains had given way to light showers once I crossed the CG-Odisha border, but it was still pretty dark. Being a Saturday, traffic was light across the roads. Plus, the local Goncha Jatra festival (1 week from Rath Yatra, when Lord Jagannath and His entourage return back to their abodes) wasn’t scheduled to start before lunch time.

Among his Mahindra brothers and sisters. Met the Paramount Automotive Workshop Manager, Tufan, who showed me the alloy which was left in his cabin. I checked it out carefully and closely and found no cracks across the rim anywhere. Just scratches which had spoiled its original new looks. At the price I had quoted, it seemed like a very good deal. Gave it a thumbs up.

Scratches on the spokes. Meanwhile, I listed the jobs which were to be done on Icarus: 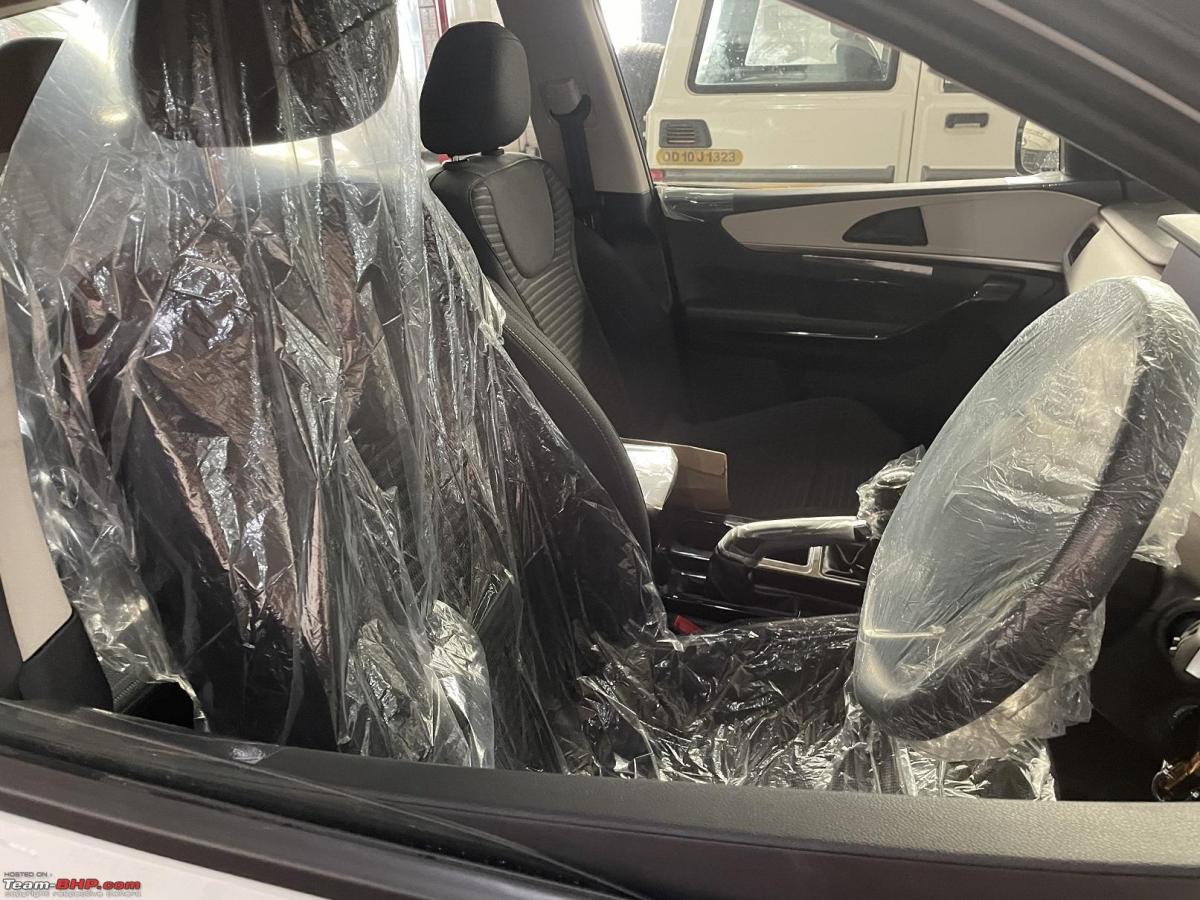 Icarus was sent into the washing bay for his bath. He received a nice, long shampoo wash and came out sparkling clean. He was being rubbed dry when the accessories guy, Rizwan, who had done the auto-headlamps fitting on Icarus in May, walked in. We went to get the necessary parts from the service shop. The ORVM switch hadn’t arrived at the dealership’s parts section yet. Status showed “Out for delivery”. Tufan sent a boy over to get it personally from the courier while we headed back to Icarus with the reverse camera kit & harnesses. 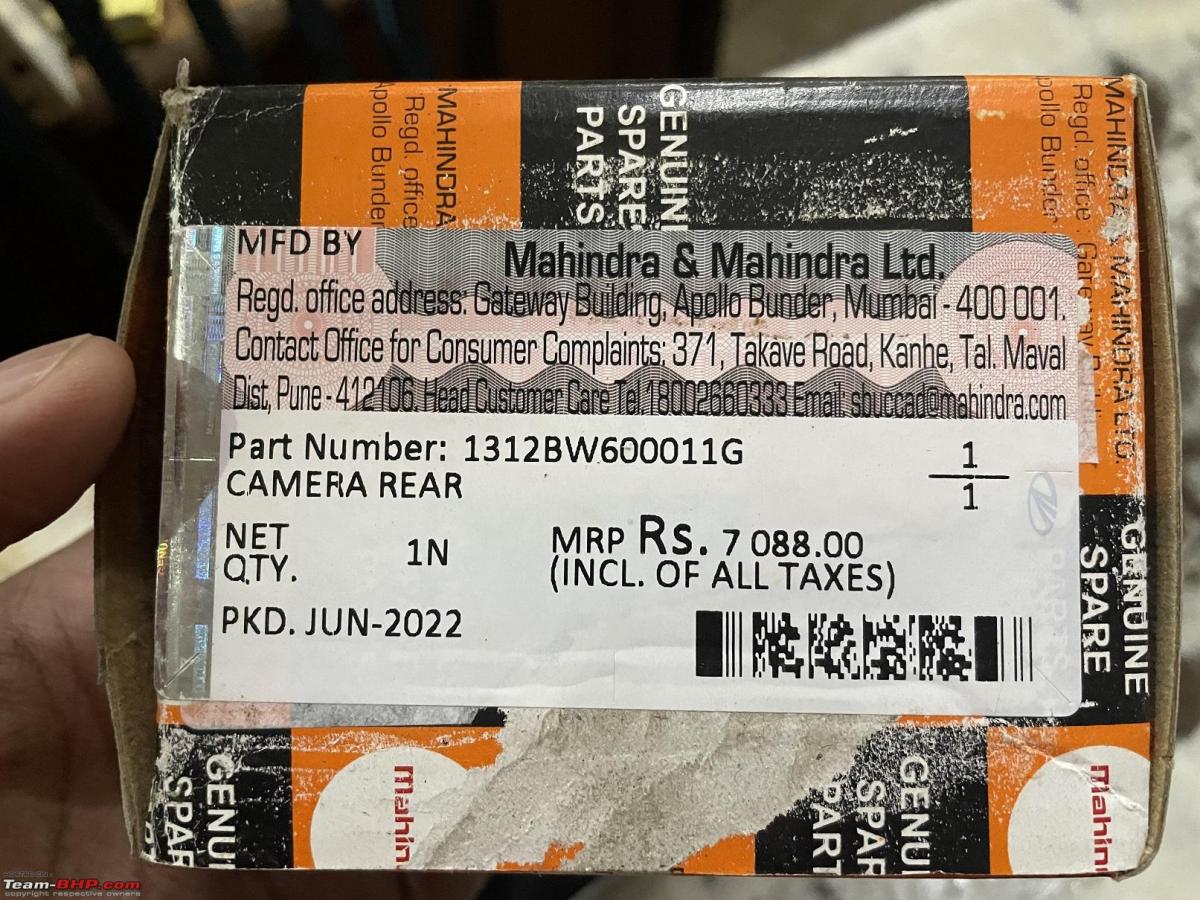 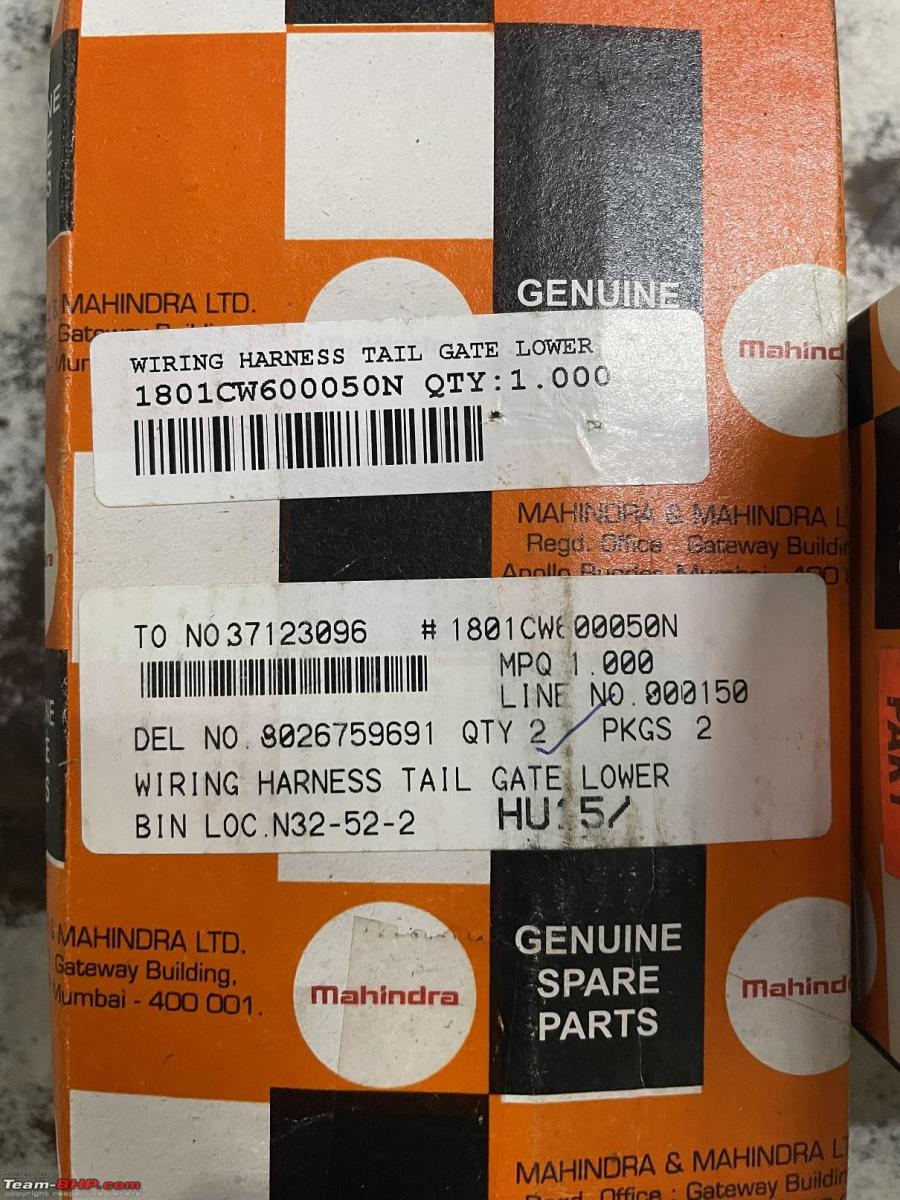 Little did we know then that we were in for a surprise and a disappointment. Both.

Sonal had sent over two guys with the HSRPs and finally, Icarus got his dog tags fitted on both sides. The boot door’s inner section came off and the wiring behind the D-pillar on the passenger side was opened up. There was a single coupler behind it and the coupler on the harnesses didn’t match it!

The inner section behind the boot lid. Now opened. Plenty of packing and insulation padding is given on the underside. The detachable section is now removed beside the rear number plate housing. The blank plate where the reverse camera will reside in. Rizwan went over to the dealership proper to check out the same layout in their demo 7OO, an AX7L AT. He came back and reported that at that same place, there were two couplers given in the demo XUV.

All of us scratched our heads. Power was enabled for the camera, but there was no output connection for it! They connected the laptop and enabled the reverse camera display which now showed the supposed display – the 7OO’s outline showed as a top-down view on the right (with the sensors’ alerts) and a blue squared screen showed on the left, which should be showing the reverse camera image. Rizwan isolated the reverse camera wiring under the dashboard on the front passenger side and tried to power it directly from there by using a separate wire, but no luck.

The connection for the Reverse Camera is under the dashboard, in front of the front passenger. Powered up and enabled via laptop. The reverse camera display shows up as the blue screen. I was of the opinion that we were doing something wrong. If this option was given and if the reverse camera offered as an accessory was getting easily connected, then there must be an option to connect the OEM camera too. Rizwan said that there were four connections for the reverse camera which was offered as an accessory, while this OEM camera came with 2 connections only and which was not showing the display even when connected.

At this point, the power-folding ORVM switch had arrived and Tufan sent the whole set over – the 2 mirrors on either side and the switch itself. Once the packs were opened, I was surprised to see that the ORVMs were equipped with cameras under them, which indicated that they belonged to the AX7L (with the 360-degree Surround-view), and not the AX7. The driver-side ORVM was mounted, and the switch was fitted but the couplers there didn’t match. Ergo, the power-folding button didn’t work. But the knob to rotate the glass in all directions inside the ORVM worked perfectly, similar to the earlier one on Icarus. The component speaker inside the driver-side door. This made me think. I went back to the reverse camera and checked it carefully. I told Rizwan that this spare part camera belongs to the AX7L and that’s why it wasn’t a match for the couplers inside the AX5. Apparently, the 360-degree Surround-view 4-camera system of the AX7L had a completely different wiring and coupler layout than the AX7 or lower variants. Once this idea hit us, Rizwan, me and Tufan went to access the inventory and check the part numbers again.

Sure enough, the part numbers for the AX7 camera, its related upper and lower harnesses and wiring, the auto-folding ORVMs and its switch, all were different from the ones which had arrived. The set which had come belonged to the AX7L, and wasn’t compatible with the AX5. No wonder none of them fitted or got enabled!

This is why the shipped OEM part had a different last letter – it belongs to the AX7L. The one for the AX7 has “N” as its last letter, not “G”.

Once this realisation dawned on Tufan, he looked sheepishly at me. He said he would order the actual AX7 parts on Monday first thing in the morning.

The AX7L’s parts were packed back into their boxes and stowed away. Hopefully, they would be of use to a future White AX7L owner from around these parts whose 7OO gets hit and he needs these spares.

I had checked out the seat covers in their accessory inventory too. The only one which looked semi-decent was the art leather one in a Deco stitching pattern. I told Tufan to place an order for the same, together with the correct parts.

With my hands burnt with the Autoform fiasco with my Phoenix (2020 Creta), I wasn’t going the aftermarket route again now. Plus, Autoform had very limited options for the 7OO, as did its sister company – Elegant. None of them appealed to me. So I decided to go the OEM accessory route for the seat cover option for Icarus.

All of this went on till 5 PM. Meanwhile, the service techs and other boys had quietly disappeared. Apparently, all of them had taken a half day’s leave for the Goncha festival. Due to this, the clutch plate could not be checked.

I asked about the DEF top-up to Tufan, and he said that the DEF came in 6-litre canisters only and so the top-up was done only when the DEF levels went below 70%. Moreover, once opened, all the DEF inside the can needs to be used up. Icarus’s DEF was at 89%, which was more than sufficient for another 1,500 km at least. Since I would be returning in 10-12 days again for the fitments, DEF can be topped up if the levels were near the 70% mark. So, net-on-net, the only jobs completed were a nice, thorough wash, picking up the alloy wheel rim for use as the spare, and the number plates were fitted.

A rather tame and disappointing end to the 1st Free Service day.

The total bill came to Rs 0/-. Paid 7,000 in cash for the alloy wheel to Tufan and headed to the dealership proper to meet the Big Daddy – the Scorpio-N. Met the Big Daddy in the evening at the dealership proper. Will post my impressions in the Scorpio-N thread.

When returning, it was already evening and showers continued to spray me and Icarus on all sides so I kept the speeds mostly between 70-80 km/h. The FE on the MID delighted me by reaching a top figure of 21.6 km/l!

Reached back home at 8:30 PM the night with the MID showing 21.2 km/l. Towing nearly 1,900 kgs and with a 2.2L turbocharged heart, these FE figures are a delight in themselves!

This particular 182PS mHawk under the 7OO’s hood is a diamond (dare I say the Kohinoor of all India-developed diesel engines!). It’s completely opened up and free for breakaway speeds when needed and can be more frugal than most when driven sanely.

Suspension is behaving as expected. Thuds from the wheels echo through the wheel wells into the cabin at low speeds and over broken sections, but when the 7OO is at high speeds, the suspension is a complete hoot. Small speed breakers and holes on the roads are brushed aside nonchalantly with very minor thuds, no doubt due to the wonderful FSDs. Braking is simply excellent. Not a single nervous moment was experienced me while driving. I was going through gradual turns with a speed of 75-80kmph – that should give a big hint about the stability of the 7OO. Steering feedback is still a bit vague in the centre, although it weighs up sufficiently with higher speeds.