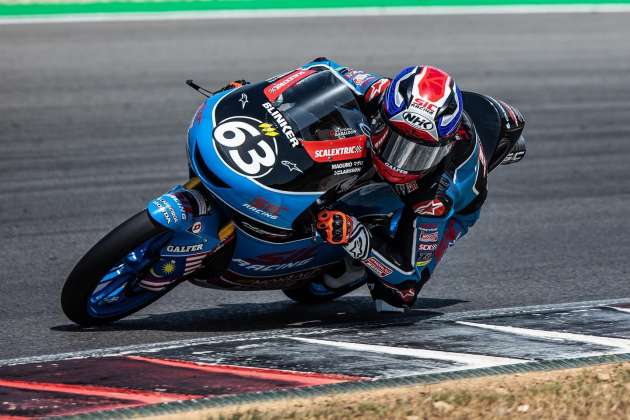 With three races left in the 2022 FIM World Junior GP championship, Malaysian Syarifuddin Azman, better known as Damok, now stands second in the riders’ championship. With 97 points in the bag, Damok, who races for SIC Racing under Monlau, took second place in last weekend’s fixture at the Autodromo Internacional do Algarve in Portugal.

Starting the race in second from the front row, Damok took the holeshot into turn one, leading the race. However, championship leader José Antonio Rueda of Team Estrella Galicia 0,0, who started the race in sixth, soon took the lead and stayed in front all the way to the finish.

It was not plain sailing for Syarifuddin in second place, with a freight-train of riders battling it out for both the number two race finish as well as the championship standings. Right down to the last lap, riders were jockeying for position till disaster struck on the as three riders collided into turn one.

This left Damok to take. the second step on the podium, followed by Adrian Cruces of Cuna de Campeones team taking his maiden podium place in third. While Rueda now has an unassailable lead in the championship with 178 points, Damok’s 97 points puts him just ahead of David Salvador of Laglisse Academy with 95 points.

Challengers to Damok’s second place in the championship include Fillipe Farioli of Aspar Junior Team with 80 points and Angel Piqueras of Team Estrella Galicia 0,0 with 81 points. Three races are left in this season’s FIM Junior GP season, Misano, Italy in September and Aragon and Ricardo Tormo in Spain in October.