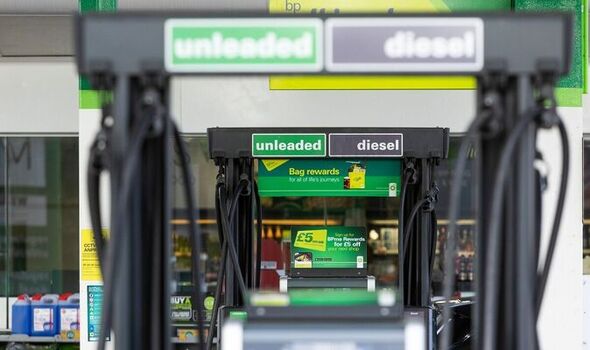 The latest Government figures show the average price of a litre of diesel is 188.9p. That is 24.5p more expensive than petrol, which stands at 164.4p per litre.

Analysis found this is the largest price difference in records dating back to June 2003.

Diesel has typically cost around 5p per litre more than petrol since then.

Steve Gooding, director of the RAC Foundation, warned that diesel could become even more expensive in the short-term.

He said: “The situation for diesel drivers is grim and unlikely to improve in the weeks ahead. In fact, it could deteriorate.

“Already, drivers of average-sized diesel cars are paying around £105 every time they fill up, about £14 more than those people with similar-sized petrol cars at the neighbouring pump.”

With the UK’s 4.5 million-strong fleet of vans and half a million HGVs running almost exclusively on diesel, Mr Gooding said companies’ rising costs will “inevitably be passed on” to consumers.

Mr Gooding said the impact on diesel supplies from the war in Ukraine is being compounded during the colder months as many countries use the fuel for heating and power generation, pushing up demand.

He added that the situation “could get worse” once the European Union’s ban on importing Russian oil products comes into force on February 5 next year as stock will need to be purchased from further afield.

The Office for Budget Responsibility (OBR) said on Thursday that a “planned 23 percent increase” in fuel duty in March 2023 will add around 12p per litre to pump prices.

The figure is based on a combination of the scheduled end of the 5p cut in duty, and the long-standing policy of duty rising in line with the RPI rate of inflation.

But chancellors have repeatedly frozen duty, and the Treasury insisted a final decision on the rate would not be taken until the next budget in the spring.