Launched last month, the facelifted 2021 Audi Q5 has now appeared in showrooms, and with dealers now open in the Klang Valley, we took the opportunity to bring you a full live gallery of the refreshed compact executive SUV from Ingolstadt (although this one’s actually from Mexico).

Available in a single 2.0 TFSI quattro S line variant, the new Q5 is priced at RM376,966 on-the-road without insurance, making it more than RM49,000 pricier than before. Included in the price is a 50% rebate in the sales and service tax (SST) and a five-year, unlimited-mileage warranty.

So what does the extra money buy you? Well, for one, the new model comes in desirable S line form, with sportier touches that include more aggressive front and rear bumpers and quad (sadly fake) tailpipes. These go on top of the exterior tweaks added with the facelift, giving the Q5 a sharper, more sophisticated look. Moving to the rear, there are revised LED taillights with “dashed line” graphics, along with full-width silver strips along the tailgate and the S line’s rear diffuser. Completing the look are 19-inch five-double-spoke machine-finished alloy wheels.

Inside, the Q5 features a new infotainment system based on the third-generation Modular Infotainment Platform (MIB 3), incorporating a 10.1-inch MMI touch display. With the new system, the MMI rotary controller and touchpad have been ditched, a replaced by a cubby hole in front of the gear selector. The 12.3-inch Audi virtual cockpit plus instrument display is also fitted as standard. 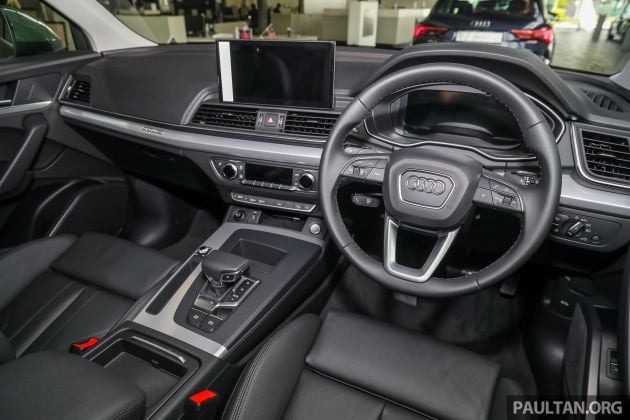 Power comes from a 2.0 litre turbocharged four-cylinder engine, producing 249 PS from 5,000 to 6,000 rpm and 370 Nm of torque between 1,600 and 4,500 rpm. New for the facelift is a 12-volt mild hybrid system that recuperates kinetic energy and allows the start/stop system to turn the engine off when decelerating below 22 km/h. A seven-speed S tronic dual-clutch transmission and quattro all-wheel drive is also fitted.

On top of the standard specification, buyers can also purchase a wealth of pricey options, such as matrix LED headlights with lane departure warning at RM12,073, OLED taillights (with three design options) at RM12,595, a 19-speaker Bang & Olufsen 3D sound system at RM8,675, a panoramic sunroof at RM16,082, ambient lighting package plus at RM1,476 and adaptive air suspension at RM10,270.

Also available is a RM10,374 head-up display, a RM3,920 park assist package and a RM2,817 black appearance package. You can also splurge on wheels, such as the RM12,699 20-inch five-spoke two-tone alloys and the RM18,408 20-inch Audi Sport V-spoke two-tone rollers. Unfortunately none of those options include autonomous emergency braking, which is a glaring omission at this price.