We open in an unlikely place for an opulent SUV designed for rich suburbanite:; a rough, steep Colorado trail. The 2023 Mercedes-Benz EQS SUV balances with its left front wheel 18-inches off the ground. The opposite front corner is at full jounce, while the passenger rear wheel is also hanging free with its suspension at full rebound

The driver exits to survey the situation. The door opens and closes effortlessly just as if all four wheels were parked on a chassis surface plate. Truly amazing, especially considering the SUV’s 6,000-plus-pound weight. It is at this moment your author recognizes how completely unphased this luxury-class SUV is being in a situation where it doesn’t belong and will likely never find itself in the hands of a consumer.

The EQS SUV dispatched this aforementioned trail complete with 30-percent inclines and declines, boulders, and rock-strewn switchback turns like a routine run to Whole Foods. How can this be, and what does this experience say about why luxury class buyers will love this vehicle?

There is only one answer for the question posed above: thoughtful, forward-thinking engineering. 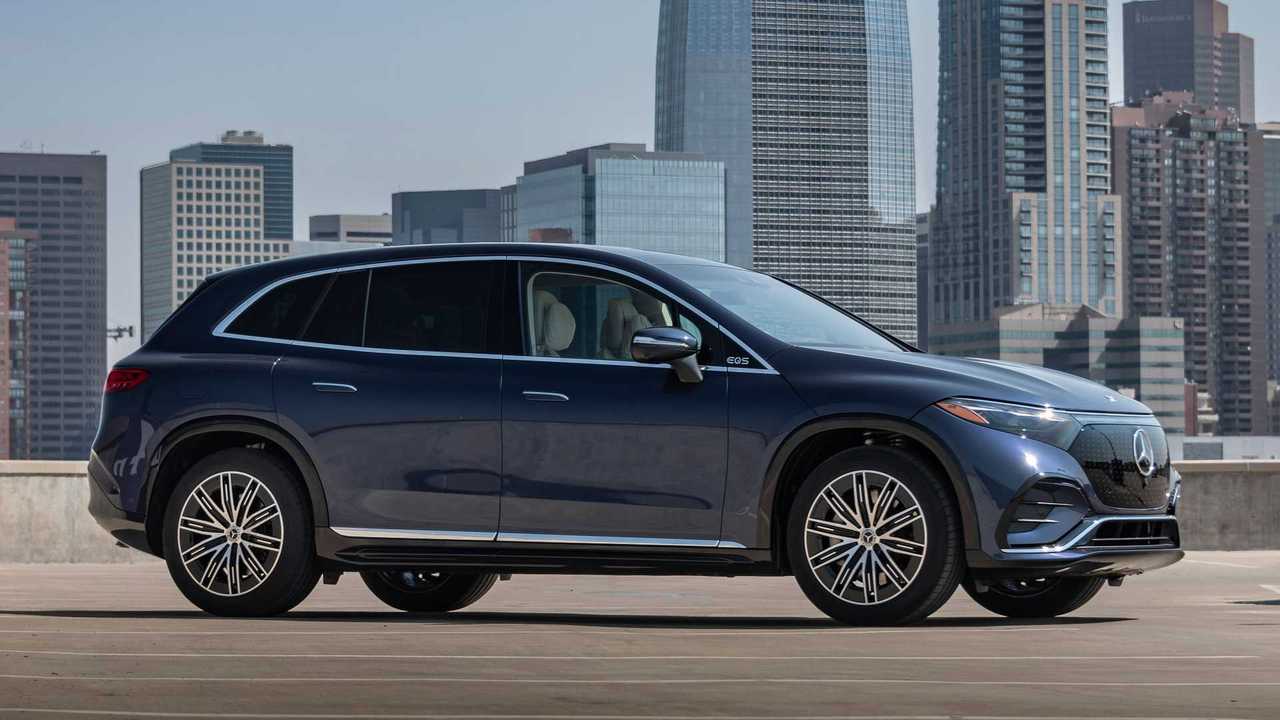 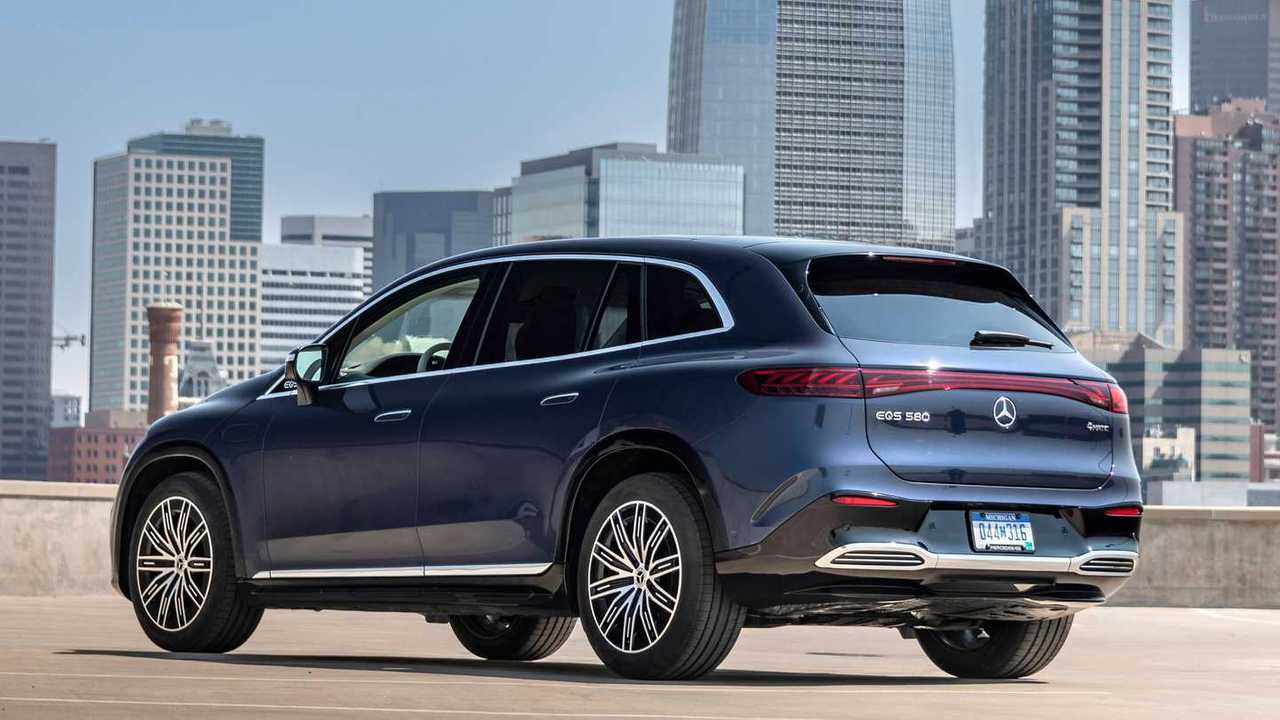 Holger Enzmann, vehicle development chief explained, “We started initial development of EVA2 in 2015, and we knew this architecture would carry a range of sedans and SUVs, so the architecture was fully designed to fulfill the requirements of all vehicle classes from the beginning.” This obviously included making the chassis rigid enough for off-roading that goes beyond typical two-tracking.

A quick refresher on the EVA2 for the US market includes these important points; the architecture is currently offered in a short (122.8-inch) and long (126.4-inch) wheelbase. The EQE sedan is on the shorter, and comes with a hard-cased 10-module 400-volt, 91-kilowatt-hour battery array. The EQS sedan and SUV ride on the longer chassis that accommodates two more lithium-ion modules, although the sedan’s 107.8-kWh battery is down on the SUV’s 108.4-kWh pack. The vehicle and its batteries are both produced at Mercedes-Benz facilities in Alabama. 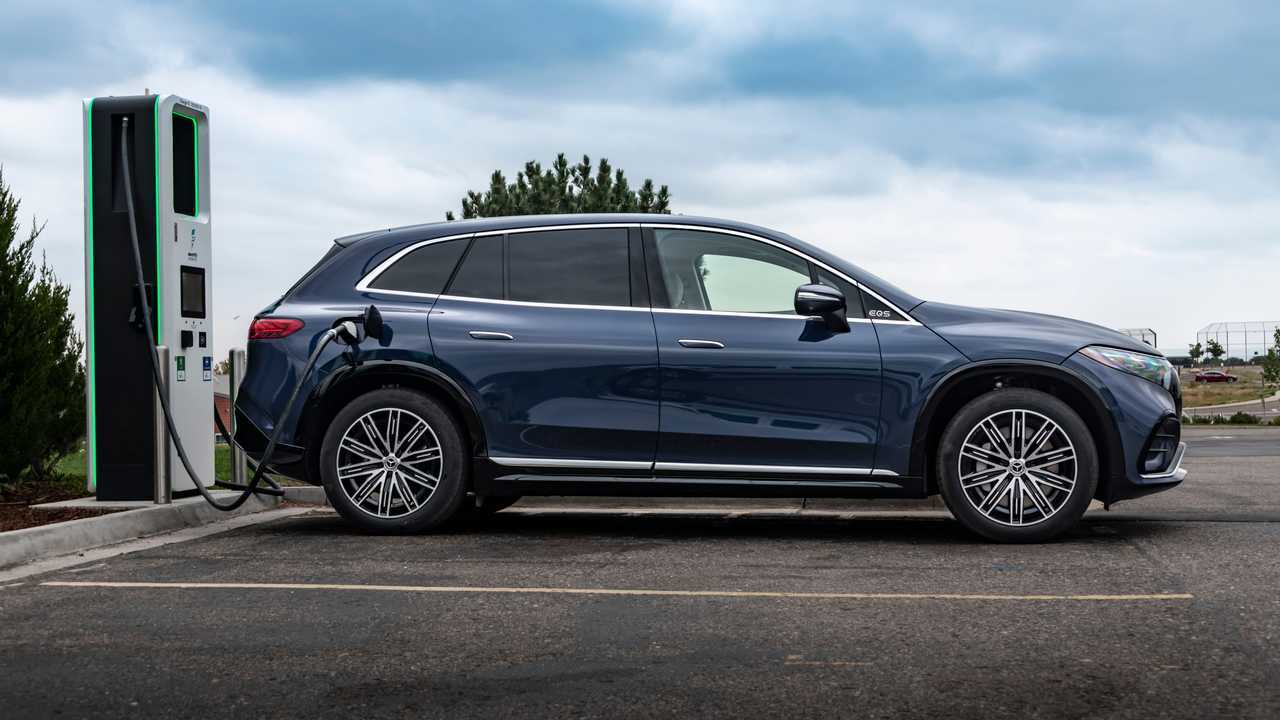 Enzmann explained the team’s choice for the battery array’s size and chemistry, “There are so many compromises and characteristics to balance, and we picked our 12-module 8:1:1 to facilitate what we believe will be best for our customers in terms of range, cycles, performance and recharging times.”

The 8:1:1 refers to the ratio of active materials: nickel, cobalt and manganese. At a DC Fast Charge (110kW) the modules recharge from 10 to 80 percent in 31 minutes, with a 305-mile max range in the EQS SUV 450+ and 285 miles for the 450 4Matic and 580 4Matic. (For simplicity’s sake, all specs here are for US-bound vehicles. Other countries will receive configurations tailored to their markets.)

The choice for a 400-volt array as compared to a 600- or 800-volt system was simply explained, “Charge times for voltages over 400 are currently longer because of the step up, and we have goals based on miles-of-charge-added-in-15-minutes. Our chosen 400-volt system performs better in this customer-focused metric than higher-voltage systems.” At least it does now. Mercedes has already announced its new MMA midsize electric platform will be 800-volt when it debuts in 2024. 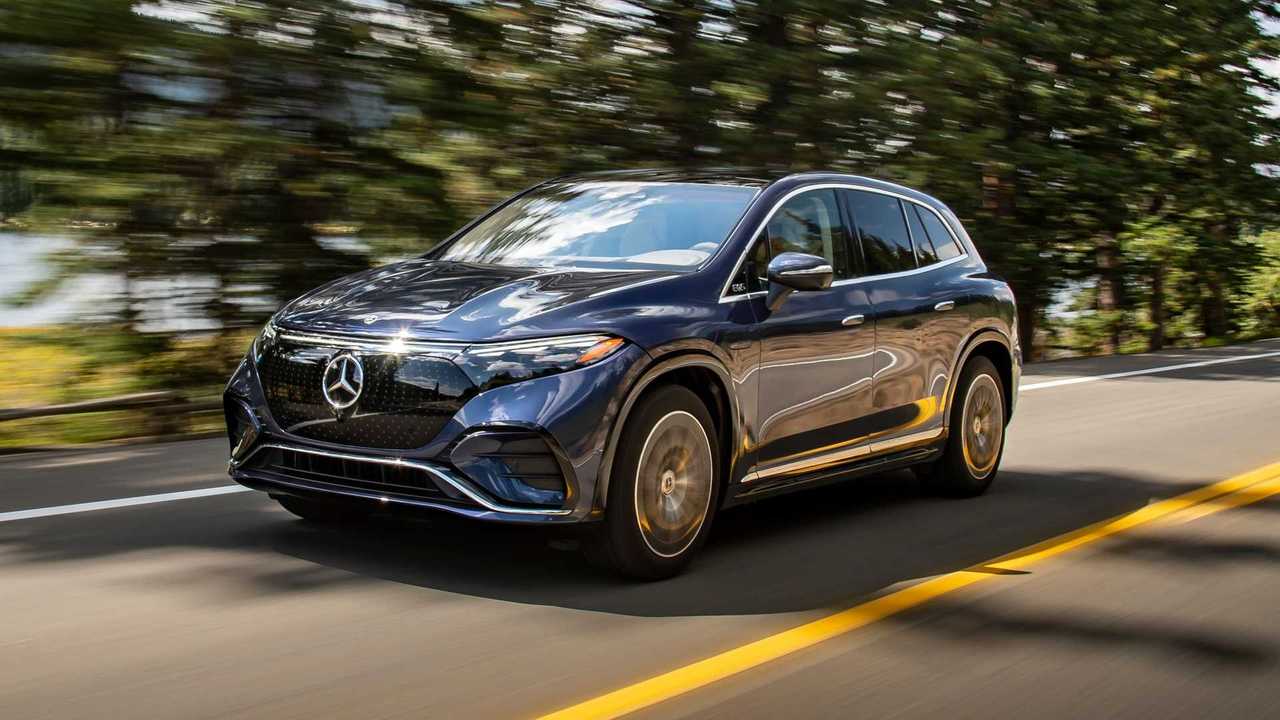 Also common between the EVA2 vehicles are rear- and all-wheel-drive configurations. All motors are Permanently Excited Synchronous (PSM) because, according to Enzmann, they provide the best balance of range, efficiency and power for the vehicles in this platform family.

The 450+ motor is rated at 355 horsepower and 419 pound-feet, while the two-motor 450 4Matic has the same horsepower, but 590 lb-ft. The range-topping 580 is rated at 400 kW and spins out 536 hp and 633 lb-ft torque. Rear motors feature two windings with three phases, while the front motor is a single-winding, three-phase unit. Motor hardware between the two 4Matics is identical, with motor software control accounting for the difference in output. 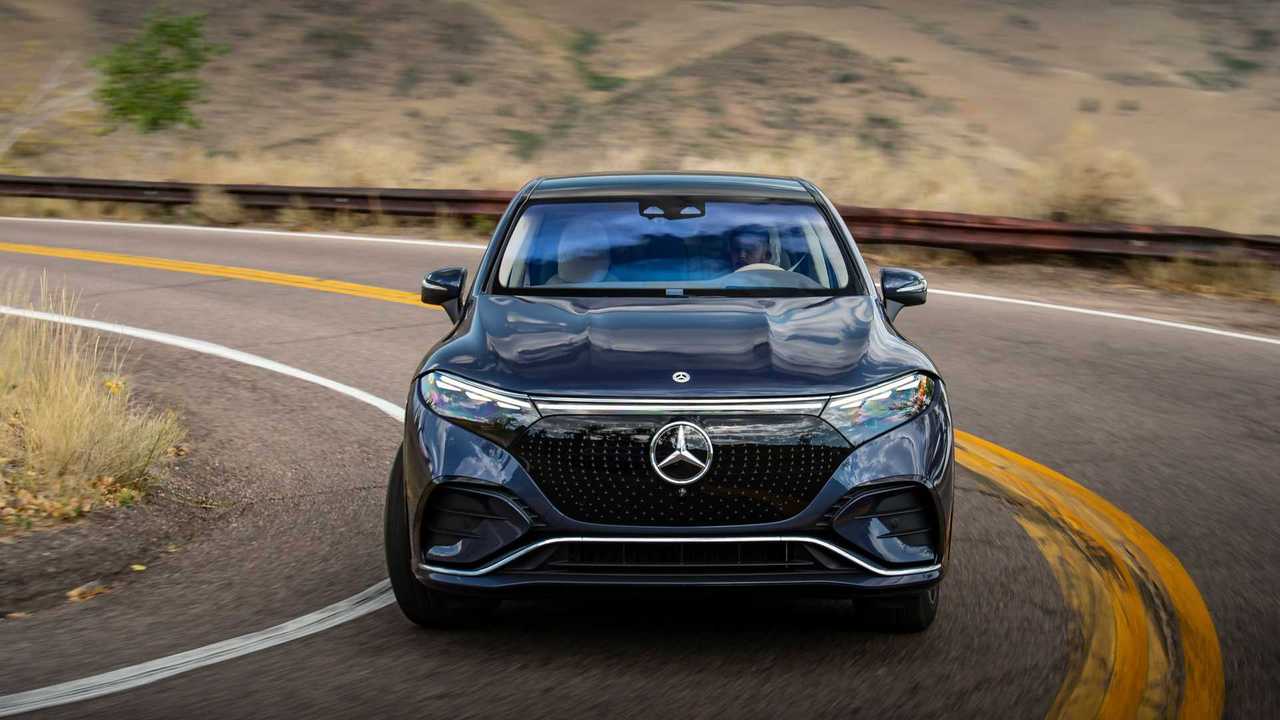 The EQS SUV’s brakes and suspension are common to the EVA2 family, with discs all around, independent four-link up front and a multilink arrangement at the rear. Air suspension with self-leveling is standard, and gives the SUV the ability to increase ride height about an inch.

As on the EQS sedan, dual-phase rear-wheel steering is standard. The low-speed opposite-phase steering maxes out at 10 degrees of opposite-phase rear steering, and makes parking and tight low speed corners feel impossibly possible. The low-speed maneuverability afforded by the rear-steer makes the EQS drive much smaller than it is by cutting four feet off of the SUV’s turning circle. Curb-to-curb is  just 36 feet. 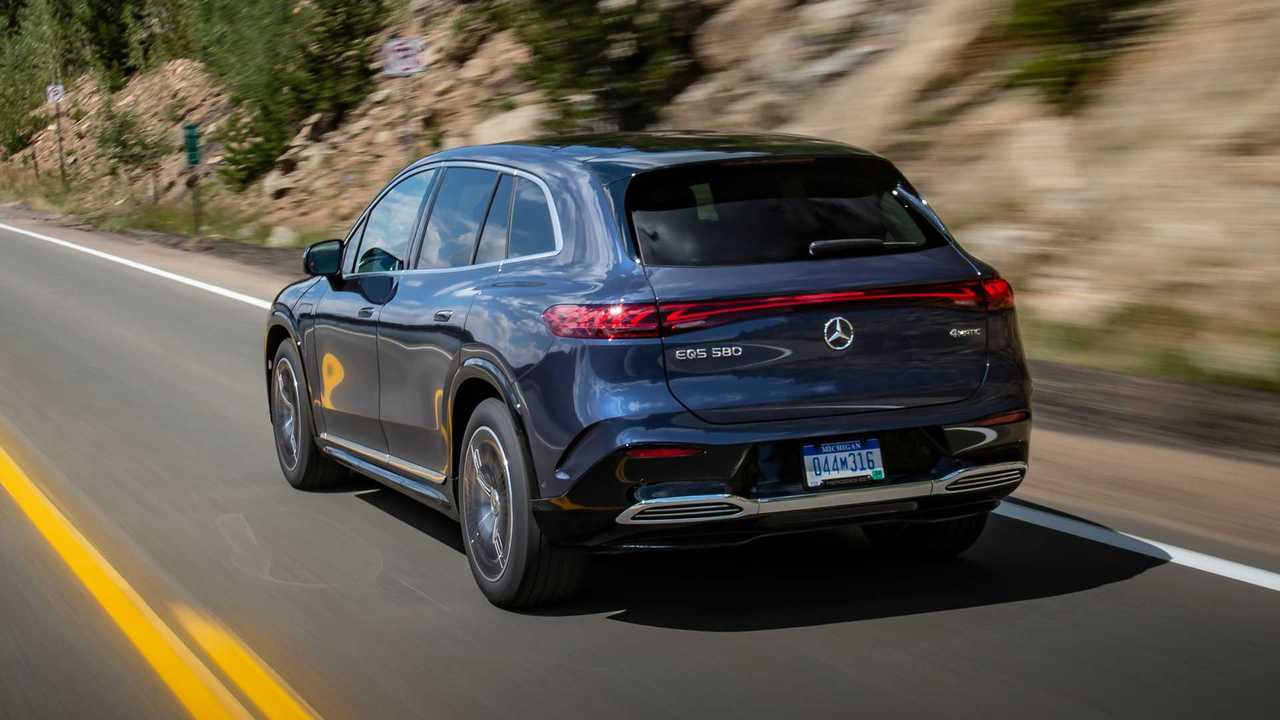 The EQS Sedan remains the most aerodynamic production vehicle in the world (0.20 Cd), and its related SUV is not far behind – even though it’s 7.8-inches taller. With an Cd of just 0.26, the one-box shape slips through the air with little wind noise. Visually, the SUV has a pronounced wheels-at-the-corners look, enhanced by the fact that the overall length is about an inch shorter than the EQS Sedan.

The necessarily smooth shape is far from featureless, with LED lighting giving it a premium personality. The SUV’s grille is particularly attractive, especially in its optional form (shown above). The recessed door handles are an elegant touch.

At the side, the black triangle at the base of the A-pillar carries an EQS and works to mask an enormous structural element no doubt necessary to meet crash targets. The front pillars are so large that when maneuvering in tight quarters or driving on twisting two-lanes, the driver must actively adjust to gain a clear view of the road ahead. 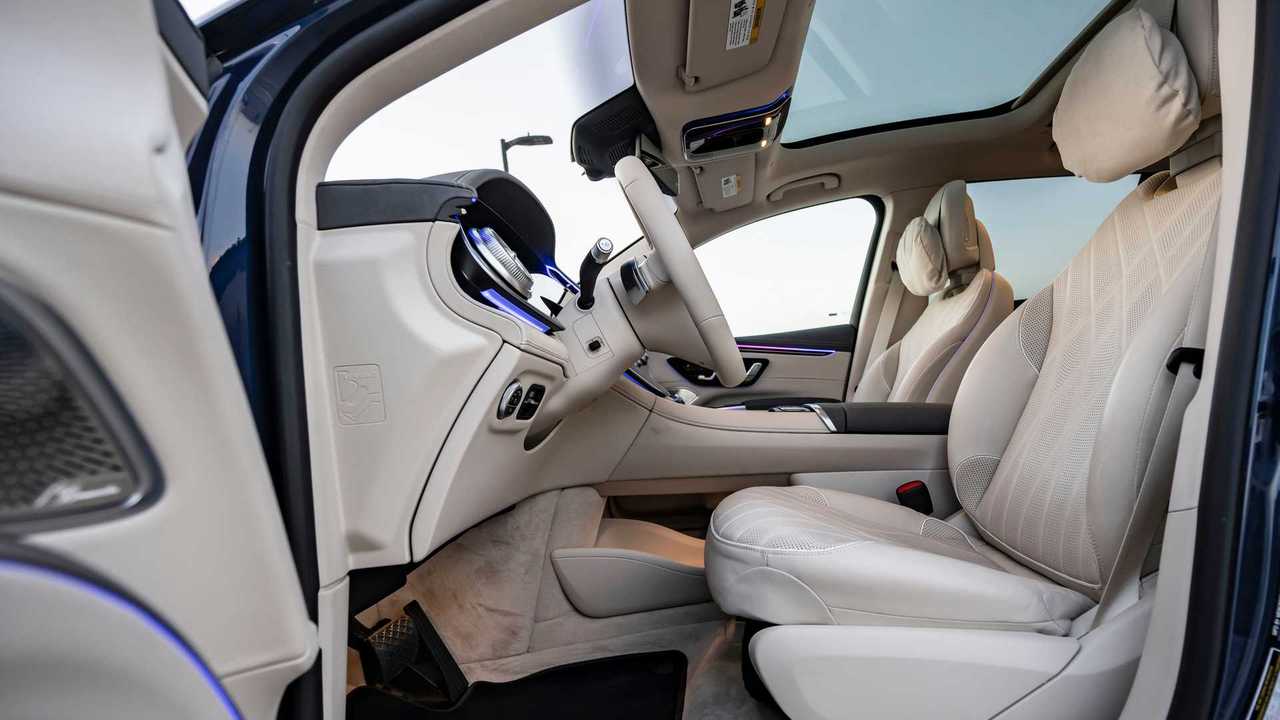 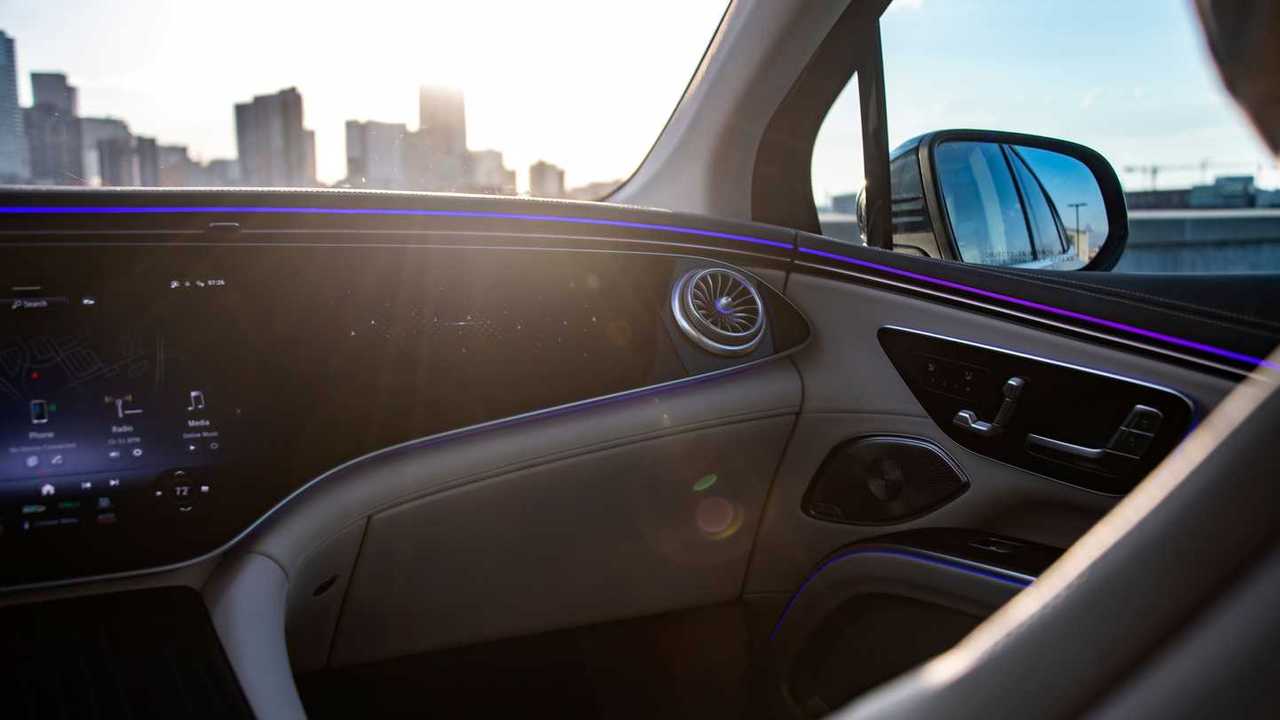 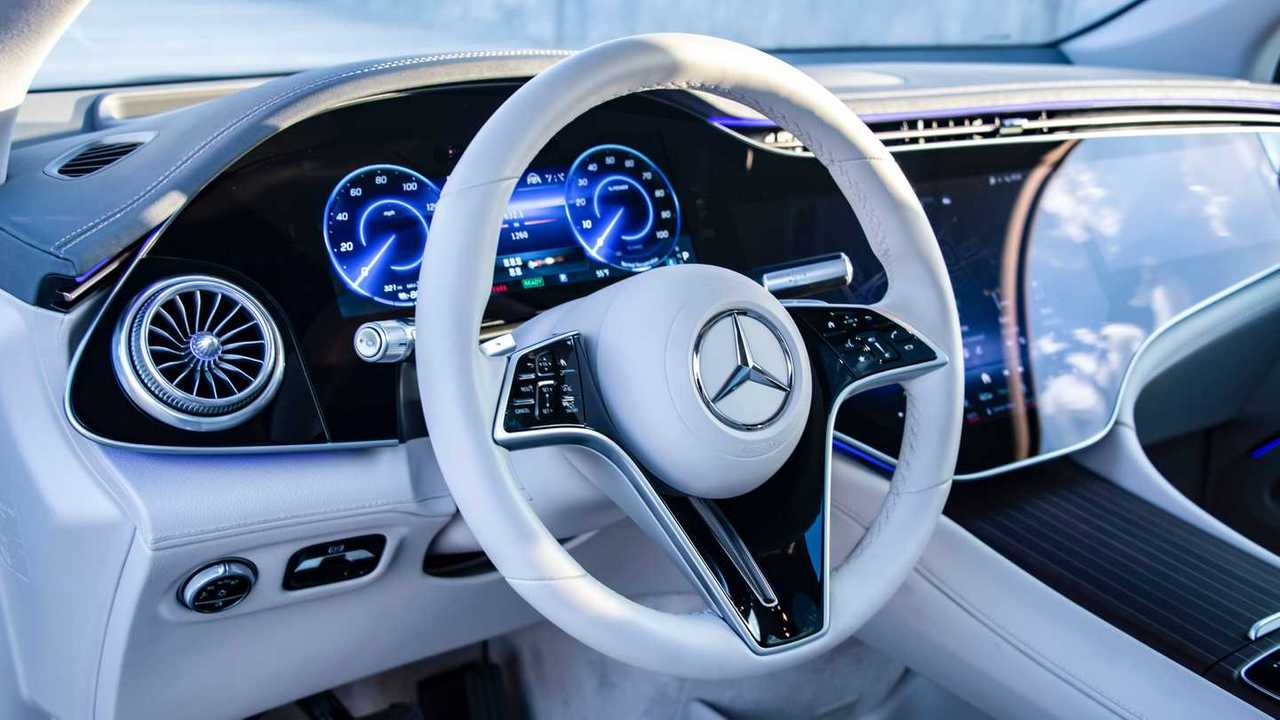 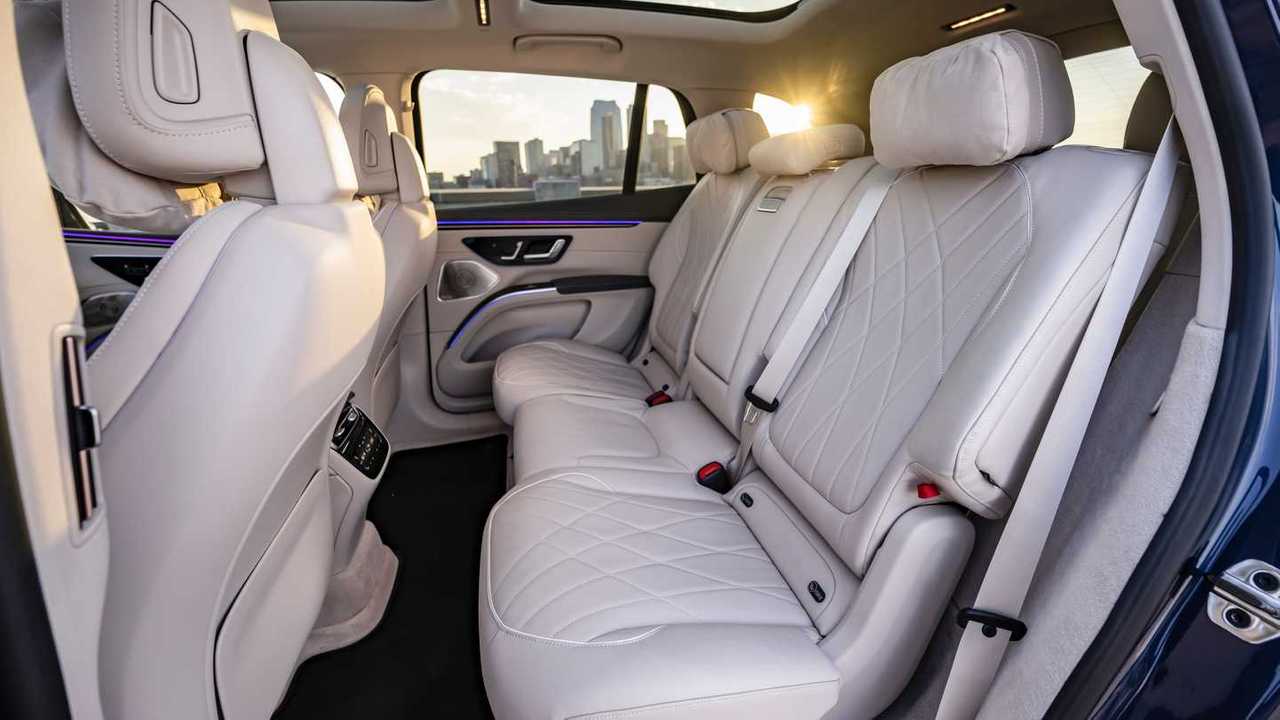 Inside, the luxuriousness of the cabin is obvious on every surface. Detailing all the materials, features and options would take thousands of additional words, so we’ll just focus on the optional huge swath of glass covering three separate OLED displays, each with its own purpose. Mercedes calls it the Hyperscreen, an integrated 3-screen array that stretches from A-pillar to A-pillar nestled under an unseamed piece of glass measuring 56 inches (it’s the biggest iPhone screen you’ve ever seen).

The uninterrupted contour covers the driver’s display for gauges (12.3 inches), the center stack for infotainment (17.7 inches), and the passenger display that can display all sorts of media, including movies. (12.3 inches). Cleverness abounds. If the passenger is viewing media on “their” screen, the system activates a stereo camera system that’s watching the driver’s eyes. If the driver is caught watching the right-side screen, the content blurs until the driver returns focus to the road ahead. 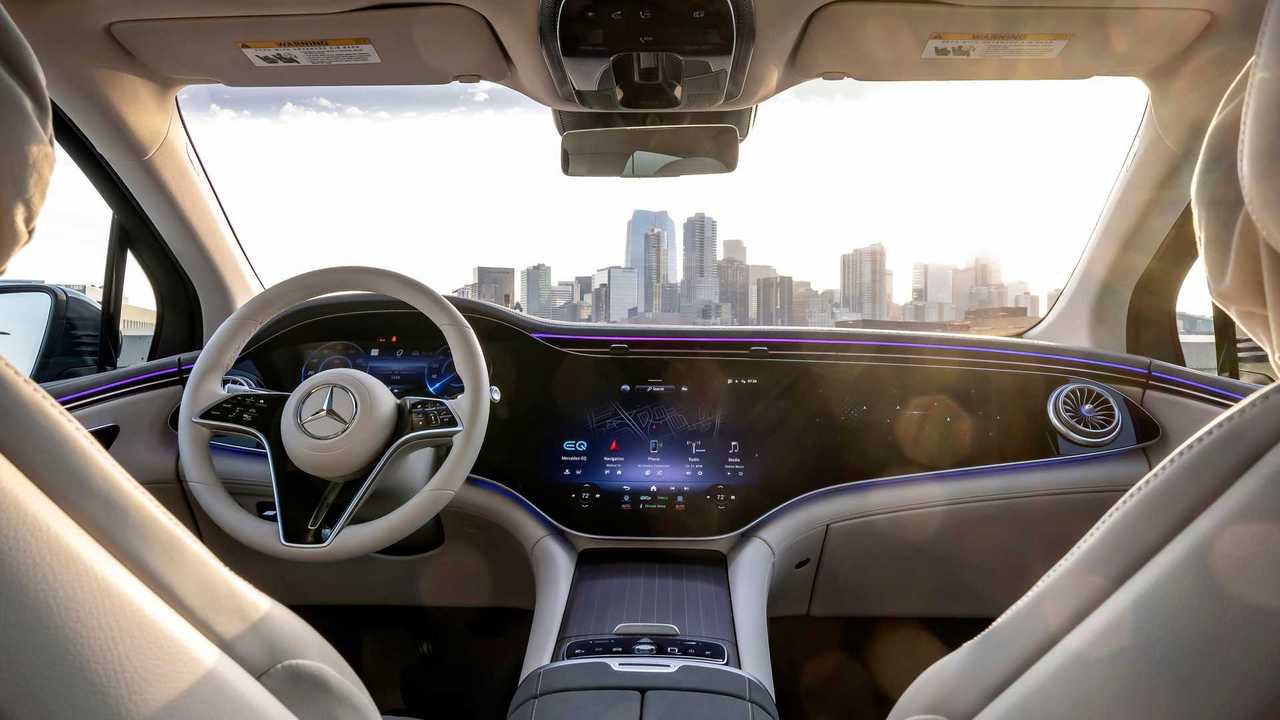 Importantly, as on other EQ products, the navigation system features AR-enhanced directions to nearby charging stations (some 60,000 in the US). Many stations also report out the number of available chargers and their ratings making it easier to find power when you need it.

Seating for five is standard, with a two-place third row available. All rear seats are power operated and fold flat. 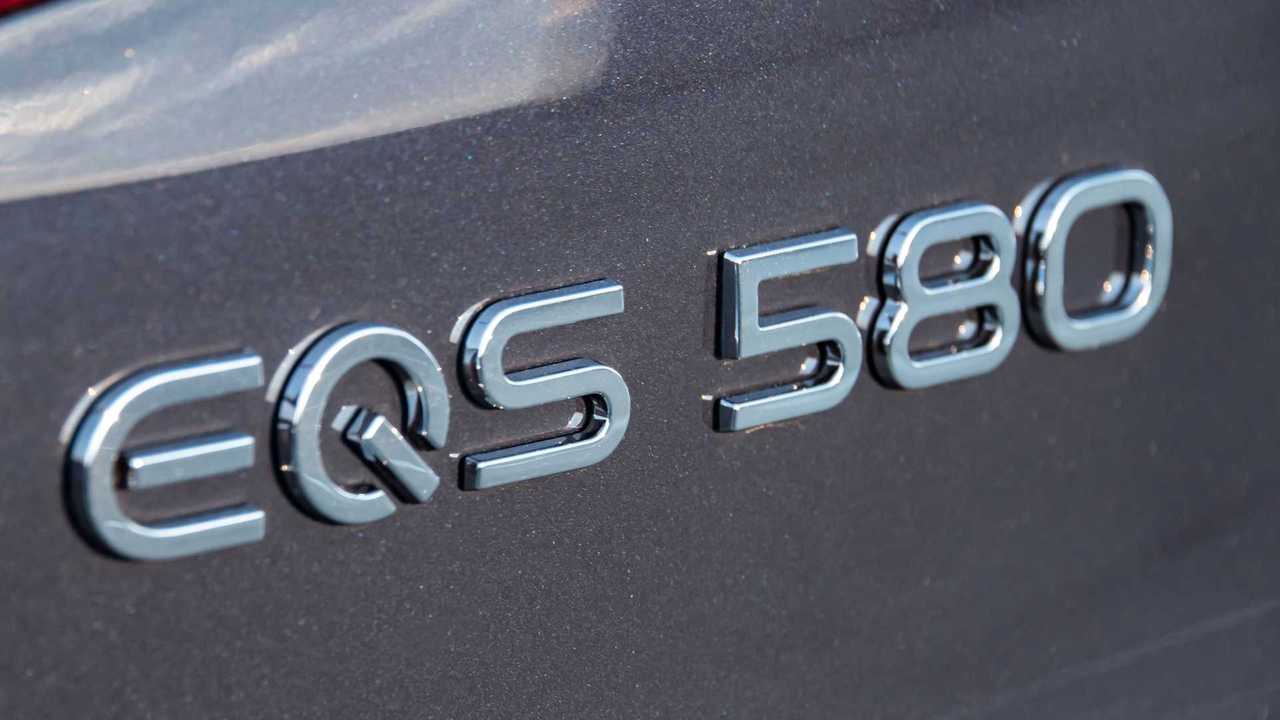 We drove all three EQS SUV models, the bulk of our miles were in a 580 4Matic. With 400 kW max output, the claimed 4.5-second 0-60 run felt more than plausible, as did the 130-mile-per-hour top end. The Denver metro area was no place to verify these numbers, but suffice it to say that the 580 launches as hard as you’d expect, but with no fuss or extraneous fanfare.

As we silently Hoovered up the miles, we kept asking the question, “Does this drive like a Mercedes?” Let’s unpack that. In terms of power… absolutely. While the power delivery is vastly different from an ICE S-Class or GLS, the instantaneous torque effortlessly launches and moves the EQS into and through traffic. Check. 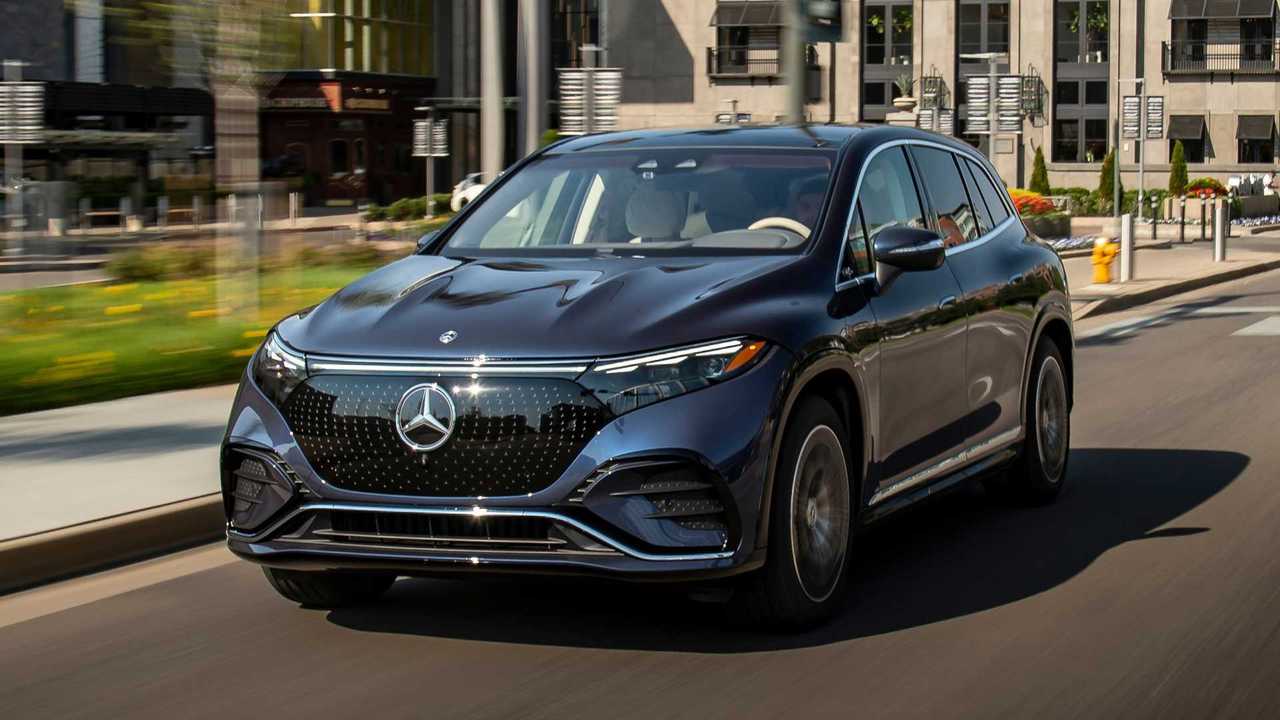 Regarding extensive luxury amenities (room, premium materials, extensive features)… most certainly. The interior exudes familiar MB design cues, and little touches abound, like the aluminum inlays over wood surfaces. Additionally, should your day have you a little stressed?  You can call up an interior A/V environment of a rain shower in a forest or waves on the beach to lower your blood pressure.

Need a massage? Front seat occupants have multiple styles to choose from. You get the idea … the interior makes you feel like you’re in a Benz.

While you could hustle the EQS, the vehicle does not encourage this, though it dutifully complied.

Given our public road driving, we didn’t begin to explore the handling limits, but on the mountain two-lanes we experienced, the SUV felt completely locked-down. Three tons of mass and grippy summer tires will do that for you. But the experience was not engaging.

While you could hustle the EQS, the vehicle does not encourage this, though it dutifully complied. The control isolation is complete. There’s zero road feel from the steering or pedals. Zero. The man-machine engagement is gone. For many buyers, that’ll be just fine, as the experience is smoother and quieter than any ICE-powered Benz. 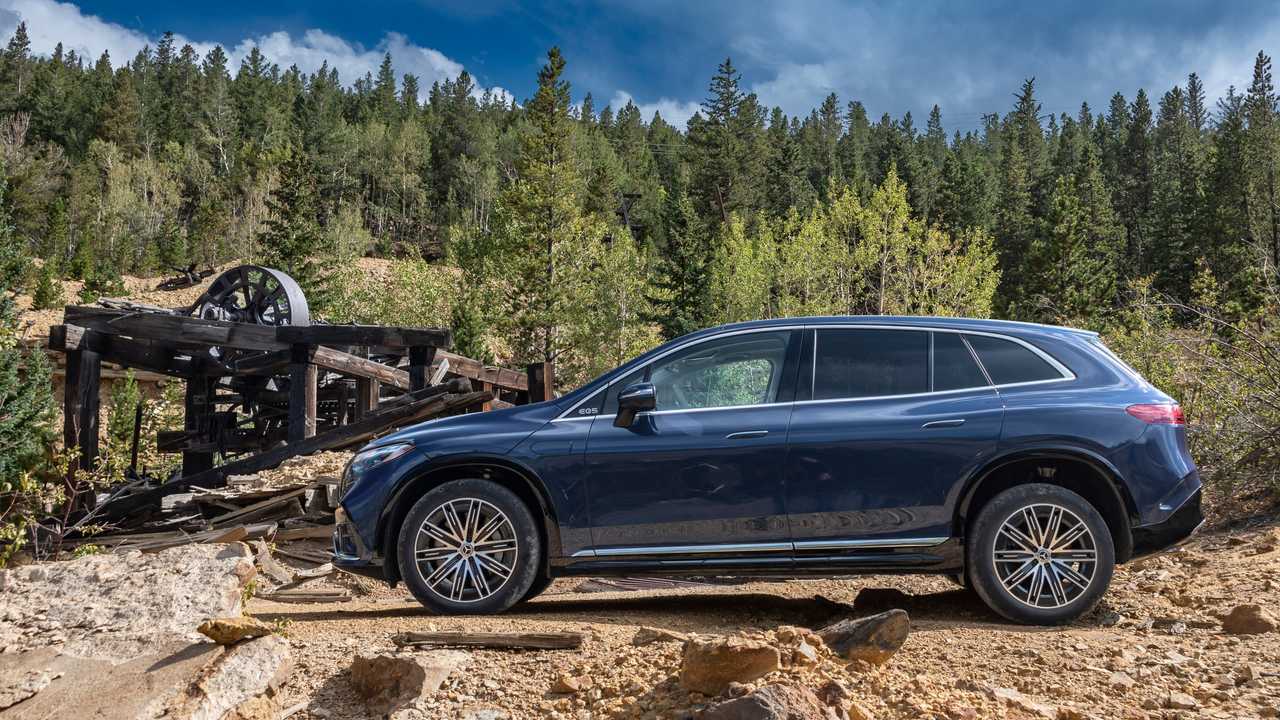 Electric off-roading is a nice thing, as it turns out. Overlanding with the windows down, all you hear are the birds, the wind, and the sound of the tires scrabbling for traction. The low-end power proved ideal for climbing steep inclines. Powertrain electronics monitor and modulate torque 160 times per second, per wheel.

In a traditional SUV with an engine, transmission, two-speed transfer case and hydraulic steering, the driver “feels” everything the vehicle is doing through the steering wheel and pedals. In the best of the breed, you can feel the contours of the rocks you’re driving over.

No such feedback is provided by the EQS SUV. Will anybody miss it? Not likely. It’s anybody’s guess, but we’d be surprised if a fraction of a percent of EQS SUV buyers will ever find themselves on a rocky trail like the one we experienced. These buyers can afford to have the driveway to their mountain retreat paved.

Now let’s rewind to the top of this story. The EVA2 architecture was designed with the above off-road scenario in mind. The amazingly stiff chassis – reflecting the safety and battery protection engineered into the skateboard from the very beginning – benefits all of the vehicles in the family. One additional benefit won’t likely be utilized often, but it’s nice to know it’s there. And that is a very Mercedes-Benz quality.