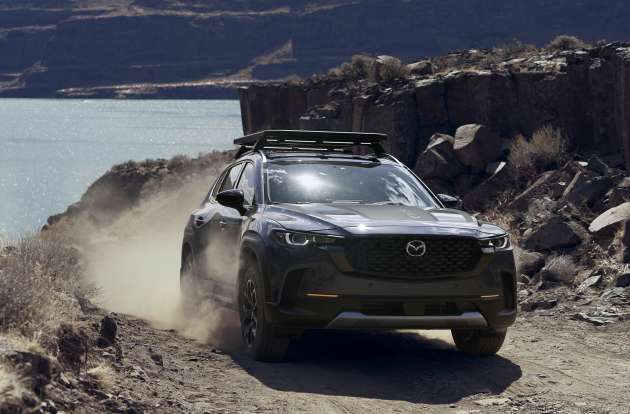 Production of the Mazda CX-50 has begun at the new Mazda Toyota Manufacturing (MTM) plant in Huntsville, Alabama, a few months after the SUV first made its debut in November last year. Built specifically for the North American market, the CX-50 will be sold alongside the CX-5 and is the first in a new range of SUVs from the carmaker, with others being the CX-60, CX-70, CX-80 and CX-90.

Besides announcing the start of production, the carmaker also confirmed some technical specifications for the SUV. At launch, the CX-50 will be available with a SkyActiv-G 2.5 litre naturally-aspirated or turbocharged four-cylinder engine, both paired with a six-speed automatic transmission and i-Activ all-wheel drive system as standard. The powertrain also comes with the Mazda Intelligent Drive Select (Mi-Drive) system with off-road-specific modes.

Output figures weren’t provided, but they will likely be similar to what you get with the Mazda 3 and CX-30 – 186 hp and 252 Nm of torque for the NA mill and 227 hp and 420 Nm for the turbo. In the coming years, the CX-50 will also be offered with electrified powertrains, including a hybrid model.

The CX-50 marks Mazda’s official return to United States production, as the last time the carmaker manufactured cars in the country was back in 2012 when it had a joint venture with Ford to produce the then Mazda 6 at the Flat Rock Assembly Plant in Michigan (currently fully operated by Ford).

“This is an exciting day for both MTM team members and MNAO employees to celebrate the first CX-50 to roll off the Discovery Line at MTM. The production of the CX-50 here signifies the importance of the North American market to Mazda and our commitment to investing in the US,” said Jeff Guyton, president and CEO of Mazda North American Operations (MNAO).

The MTM plant is the result of a USD2.3 billion joint venture partnership between Mazda and Toyota, first announced in March 2018. The facility has been operational since September 2021 and has the capacity to produce 300,000 vehicles annually, split equally for both brands.