Following the reveal of the second-generation Maserati GranTurismo in October, the Italian carmaker has begun teasing and testing the convertible version called the GranCabrio.

In official photos provided by the carmaker, we see camouflaged examples of the GranCabrio in various settings. Despite the extra skin layer, it’s pretty obvious the body is very similar to the coupe, with familiar cues being the vertical headlamps, slim taillights and general proportions.

Being a convertible, there are some adjustments made to accommodate the fabric soft top, which the previous GranCabrio also had. We don’t get to see the interior but expect it to be identical to the coupe, including the 2+2 seating layout. 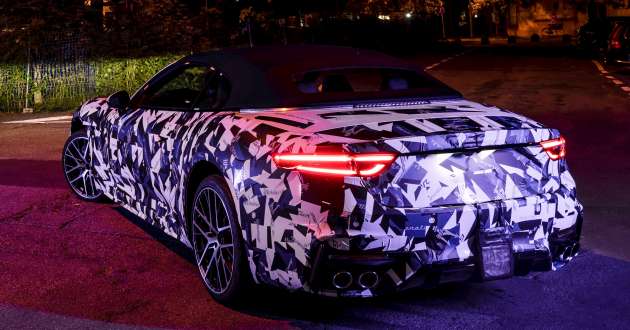 Engine options will be shared too, with a 3.0 litre twin-turbo V6 powering both the Modena and Trofeo variants (spot the quad tailpipes). The former should deliver 496 PS (489 hp) and 600 Nm of torque, while the latter packs 557 PS (550 hp) and 650 Nm. Both come with an eight-speed automatic transmission and all-wheel drive.

Maserati says the GranTurismo and GranCabrio are the brand’s first cars to adopt a 100% electric powertrain, in line with its plans to offer a fully-electric version of each car in its range by 2030. The full launch of the GranCabrio will take place next year after the carmaker is done with its internal testing.