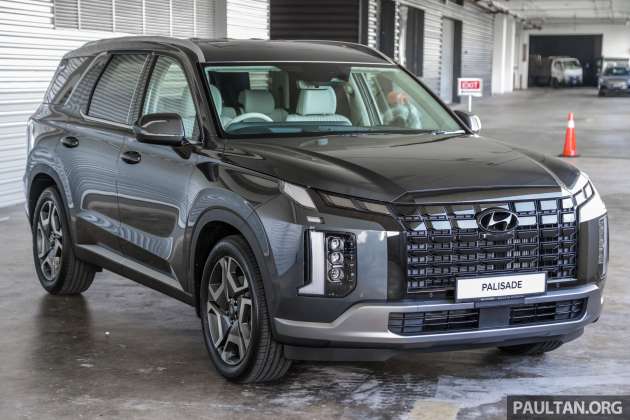 The 2023 Hyundai Palisade facelift has been launched in Malaysia, and the three-row SUV arrives with two powertrain options – a 2.2-litre turbodiesel and a 3.8 litre naturally aspirated petrol V6 engine – and two trim levels (seven or eight seats) across four variants, as with the pre-facelift Palisade that was launched in Malaysia in December 2021.

Measuring 4,995 mm long, 1,975 mm wide and 1,750 mm tall with a wheelbase of 2,900 mm, the Palisade remains largely the same size as its pre-facelift iteration, albeit now having gained an additional 15 mm in length from a 20 mm longer front overhang, offset by by a 5 mm shorter rear overhang.

Both the Lambda II 3.8 GDI petrol powerplant and the R2.2 CRDi diesel unit are paired with eight-speed automatic gearboxes, albeit differing in driveline; in Malaysia, the petrol version is offered solely in front-wheel-drive, while the diesel version gets HTRAC all-wheel-drive.

In the AWD-equipped diesel variant, the HTRAC system automatically varies the torque split between the front and rear axles, from 100:0 (full FWD) to an 50:50 equal split AWD.

Across both powertrain options, the driver gets access to drive modes – Comfort, Eco, Sport and Smart – via a rotary selector, and in diesel-powered variants with all-wheel-drive, the rotary selector additionally incorporates the HTRAC terrain management system with additional modes for Snow, Mud and Sand.

In terms of aesthetics, the 2023 Palisade facelift codenamed LX2 PE – suffixed for Product Enhancement – gains a slightly more upright, square-cut set of shapes relative to the pre-facelift, now receiving a radiator grille that is more rectangular, a redesigned set of headlights and DRLs, as well as restyled front bumper and skid plate trim.

Located next to the grille in its Parametric Jewel design are the tinted indicator units, forming a visual extension of the blocks from the grille. Meanwhile, the LED DRL strips have been relocated to be outboard of the LED high- and low-beam lights, compared to the pre-facelift.

Changes to the rear end of the Palisade for its facelift include the rear combination lamps, reflectors, rear bumper and skid plate, as well as a new alloy wheel design that measures 20 inches in diameter, shod in tyres measuring 245/50. The rear lamps are where the petrol and diesel variants can be visually differentiated; the diesel gets halogen brake lights alongside its LED tail lamps and indicators, while the petrol gets the full LED tail lamp setup.

Front seats get heating and ventilation, with 12-way adjustment (plus cushion extension and lumbar support) and memory for the driver’s seat, and eight-way power adjustment for the front passenger seat. As with the pre-facelift, this updated Palisade gets heated and ventilated second-row seats for the seven-seat version, while the the second row in the eight-seater gets heating only.

Access to the third row is facilitated by a one-touch release of the second-row seats, which can also be folded flat from the rear of the vehicle by pressing a button within the luggage compartment. Cargo space in the Palisade facelift is 1,297 litres with the second and third rows folded, or 509 litres when all three rows of seats are upright.

Infotainment now gets upsized to a 12.3-inch AVN unit, up from the 10.25-inch item in the pre-facelift Palisade, and features split screen functionality, a vehicle setting assist function, as well Bluetooth for up to two devices simultaneously for audio streaming.

Apple Carplay and Android Auto now require a wired phone connection for both, compared to the wireless functionality in the pre-facelift SUV. Audio in the Palisade facelift is via a six-speaker sound system.

For powering mobile devices, each of the three rows of seats in the Palisade facelift get two USB-C charging outlets, rated for a maximum of 27 W and 3 A. There are also four 12-volt power outlets throughout the cabin, located in the centre console, front and rear rows and in the luggage compartment. Meanwhile, the wireless charging pad for mobile devices has been uprated in this facelift to 15 watts, up from the 5-watt output of the pre-facelift Palisade.

The driver gets an upsized head-up display too, which is now a 2.6-inch, 800×480 pixel resolution HUD in this facelift, up from the 1.8-inch, 480×240 pixel resolution of the previous iteration. In contrast to the international market specification, the HUD for Malaysia does not include navigation/turn direction arrows.

Active safety equipment in the Palisade facelift now gains the Multi-Collision Brake System (MCB), which slows the vehicle in the event of an accident that deploys the vehicle’s airbags in order to prevent the occurrence of secondary, subsequent impacts. The MCB operates when the vehicles is travelling below 180 km/h at the time of collision, and if the brake and accelerator pedals are minimally depressed.

Offered as standard is a two-year, 50,000 km warranty, while the optional extended warranty package that gives a five-year, 300,000 km coverage is priced at RM11,000 for the petrol variants, and RM12,000 for the diesel variants, which will then also include a three-year service package.