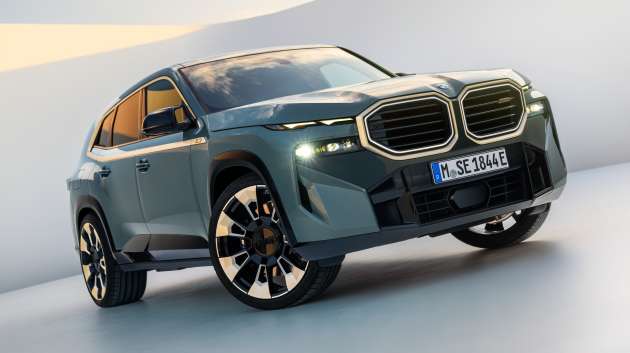 Following the start of pre-orders for the BMW XM in October last year, BMW Malaysia has now revealed official pricing for the performance SUV. The XM, also known internally as the G09, made its global debut in September 2022 and is the M division’s first standalone model since the M1 while also being the first M model to feature a plug-in hybrid powertrain.

The asking price for the XM is a cool RM1,316,450 on-the-road without insurance, and this applies to the two variants available, namely the Shadow Line and Night Gold Line. It should be noted the figure includes a standard two-year warranty, with the price shooting up to RM1,398,800 should you add the five-year extended warranty and service package. This is still below, albeit just, the estimated price of RM1.4 million we were told when pre-booking began.

For the money, you’re getting a lot of power, with the PHEV powertrain delivering a total system output of 653 PS (644 hp or 480 kW) and 800 Nm of torque. All that grunt is enough to get the large SUV (it’s over five metres long and weighs well over 2.5 tonnes) from a rest to 100 km/h in just 4.3 seconds. Flat out, it’ll hit a top speed of 270 km/h, which is possible thanks to the standard M Driver’s Package.

At the heart of the M Hybrid system is an S68 4.4 litre twin-turbo V8 that serves up 489 PS (483 hp or 360 kW) from 5,400 to 7,200 rpm and 650 Nm of torque from 1,600 to 5,000 rpm. The petrol mill is paired an eight-speed M Steptronic automatic gearbox with Drivelogic as well as an M xDrive all-wheel drive system to direct drive to the wheels. The drivetrain also includes an M Sport differential at the rear axle linked up with the vehicle’s DSC (Dynamic Stability Control).

Joining the internal combustion engine is an electric motor integrated into the transmission that is rated at 197 PS (194 hp or 145 kW) and 280 Nm. This is powered by an underfloor-mounted lithium-ion battery with an energy capacity of 25.7 kWh (29.5 kWh gross).

Fully charged, you can expect around 82-88 km of range following the WLTP standard and a top speed of 140 km/h when running purely on electricity. As for the plugging in aspect of ownership, the car can take in a maximum AC input (Type 2 connection) of 7.4 kW, with a full charge (0-100% state of charge) requiring 4.25 hours.

Differences between the two available variants are mainly found on the exterior, with the Shadow Line having Night Gold accents on its 23-inch M light-alloy star spoke style 923 M bicolour wheels. The Shadow Line sports the same wheel design, but its set features Black accents instead. For the curious, the tyres measure 275/35 at the front and 315/30 at the rear.

Other shared features are the M Aerodynamics package, Iconic Glow illuminated kidney grille and M high-gloss Shadowline exterior trim package, although the last item comes with extended contents on the Shadow Line variant. The Night Gold Line, in keeping with its name, has gold touches on areas surrounding the windows and rear apron to complement the hue of its wheels.